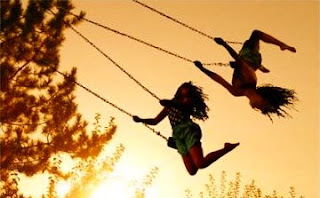 It’s absolutely amazing how Facebook has brought old friends or even just old acquaintances back into communication again. Those who knew me well when I was a child also knew my family while growing up.  After yesterday’s post, a close old friend had written me an email asking me how my father reacted when he found out I that I was a lesbian. My father is your typical ‘old school’ Brooklynite, who smokes four packs of Camel’s non-filtered cigarettes and could put away three pots of coffee in one sitting.  I remember hearing ‘cling-cling-cling-cling-cling-cling-cling-cling’, from his spoon swirling around in his cup a million and one times. He would stir the coffee so much that I felt like screaming, “It’s mixed already, dammit!” As you approached him, there was a thick layer of gray smoke surrounding him. Even if he wasn’t smoking, the remains of the cigarette clouds would linger for hours. The ‘stop, drop and roll’ technique never worked so well. We had to talk to him with gas masks on.

My first real job out of school, I had developed a very casual relationship with one of the sales managers that my sister Dawn and I used to work with. My sister never, ever, ever, ever, ever, ever, ever, had an inkling about me. During business meetings, my “friend” would give me those looks - you know - those ‘they have no idea we’re together’ type of smirks. Business lunches were always awkward. My friend would get up from her table and give me ‘the look’ to come with her to the ladies’ room. My sister walked in at .02 seconds after my friend had just planted one on me. My face went white and I thought for sure she knew. She had no idea. I don’t believe she knew anyone that were gay other than Boy George.

After a few incidents similar to that, I was sure my sister knew. I had to tell her before she finds out. I didn’t want the type of situation where your family knows before you "out" yourself. The worst thing in the world is: “Hey mom and dad, I’m gay.” And their response: “Yep, we know,” as they flip through the ‘parents with gay kids support group’ section of the paper. So I decided to take it upon myself to out myself to tell my sister Dawn, who I thought had an inkling about me. My other sister already knew, so I was sure that maybe somewhere, somehow, it may have slipped out or ‘guessed’ or ‘assumed’.   Who knew...?    When I first told her, I couldn’t seem to get the right words out, other than, “You know me and “Jen” are close right?”She just gives me a blank stare, “Well yeah you two get along great!”
“No, we’re very close friends.”
“Okay...” she says, in a ‘where is this going’ type of tone.
“It’s more than a friendship.”
“Like sisterly?”
“No.”
“Oh!” she said, with her jaw to the ground and her eyes fixated on me as though I grew a few more heads.

So needless to say, mom started giving me the “look”: that look that said, “I’m on to you kid.” It was the same look when I came home and she seemingly detected alcohol on my breath or if I had smoked pot, she’d say, “I smell that funny burnt rope smell!” I just ran to my room and insisted that she was crazy.

“Don’t tell ya’ fatha’”, were the first words she said when she confronted me about being gay. I can see if I was his son working in his excavation business and wanted to start my own beauty salon, but I was his daughter that had no impact on his business whatsoever. At that time, I started dating Madelene. Nonetheless, I never said anything, until one day, while my dad was watching the gay parade on television, he blurts out with his loud Brooklyn accent without hesitation, “Wouldja’ look at ‘dese fairies - wouldja’? They even tawk’ funny yanno’ wad’ I mean?" I just sat there eating my cereal and trying to think of the right words to conjure up, so that the Archie Bunker alter of his could freak the hell out and possibly blame Edith for my twisted ways.

“Hey dad, you have four daughters, one married and the other two coupled up with nice men. Did you ever think that one may possibly stray out of the pack?” He sat there for a few moments, taking the longest drag from his cigarette. You could actually hear the paper burning as he sucked every bit of nicotine into his gargantua-like lungs.
“You tellin’ me you’ a fairy?”
“Yes.”
“You wid’ dat’ nice Spanish girl dat' sends me pastries?”
“Yes.”
“Good fo’ you. She’s a nice girl. I’d ratha’ see ya wid’ her than these lousy creeps dat’ are out ‘dare - yanno’ whad’ I’m tawkin’ abow’???”

And the very last thing he said to me was: “Don’t tell ya mutha’!”
coming out Debra Pasquella facebook gay and lesbian LGBT networking sites