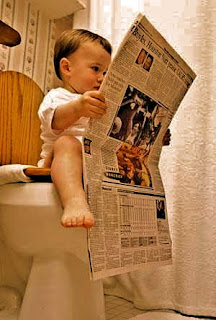 The day hasn’t even started for me and yet, I dread walking out of my very own door. It started at 4:30 am, when I’m about to head downstairs to grab some paperwork that I had left in my car. I opened my door to go outside and I felt something hit my midsection and then heard it flop on the floor. “Sorry, ma’am!” My paperboy is a quicker-dropper-offer and does his job well. But, today it was different. I just looked at him with one eye opened and said, “I hate being called ma’am.” Whatever happened to the days of being called “Miss” and “young lady”. Those days are sucked right down the drain. I grabbed my newspaper, which is more like mierde put together in a bundle of misspelled and fragmented sentences for the locals to be 'in the know' about their neighborhood happenings. Their press should really pass out "Hooked on Phonics" for all of their employees.

A couple of hours later, I start making breakfast for Madelene. I figured I’d make her a couple of eggs on a bagel and for me, one egg on a piece of toast. I reached up into the cabinet and grabbed the Pam cooking spray, when I realized it wasn’t “Pam”; it was a money saving brand version that Madelene must have picked up. I sprayed in on the pan and it smelled like ass. There are only a select few things I will purchase in money saving brands, but this is not one of them. “I refuse to cook with this ass in a can, Madelene!” I am not exaggerating when I say it smells like “ass” - it totally resembles an overused bathroom at a bad Mexican restaurant.

Aside from that, Madelene and I are trying to cut out all sugar in our diets. We don’t want to replace the sugar intake with some cancer causing substitute either; we just want to wean off as best we can. So, instead of putting two teaspoons of sugar in my coffee, I decided to drink it black with no sugar, like I used to do. Madelene went from two to one. Not bad - she’s making progress. We’re trying to incorporate more fruits and natural sugars instead of the refined stuff. So as she was getting prepared to leave for work, she grabbed a banana and an apple and then placed them on the counter...along with a few extra treats. 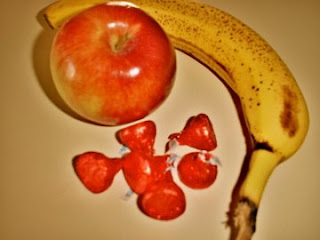 (This photo was taken - no props, no 'setting up' or anything. It was taken "as is"!)
The day hasn’t even started yet and I really dread walking out of here today.
Have a great weekend everybody!
Debra Pasquella Hooked on Phonics sugar substitutes