Lions, Tigers and Bears! Oh My! 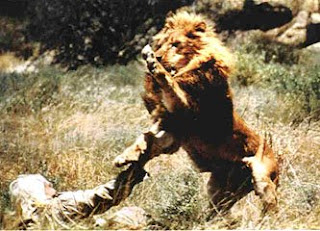 While being home sick with the flu for the past couple of days, I’ve been thinking way too much and out loud in cyberspace. This is one of the few topics which Madelene highly disagrees with me on.

I’ve Twittering my thoughts like it’s nobody’s business. I have been in discussions regarding the coverage on 60 Minutes about how lions are being poisoned in Africa by the civilians. I highly disagree with 60 Minute’s stance on this, because these lions are killing the people’s cattle, which provide them money as well as food for themselves. So in return, when their cattle are mutilated beyond belief by lions, the civilians who live off their land purchase a bottle of poison for less than $2 bucks so they can survive.
"They're very unlikely to attack us," Cotterill explained. "There's been so many years of conflict with people in this area, it's almost hardwired into their systems to be terrified of people." --read more here.

They’re very unlikely to attack us? Let’s hear her say that when one of her family members are being served up in the lion's den as a small appetizer. These animals are dangerous to humans and their food supply. I’m almost positive, if we were to still have dinosaurs roaming around the earth, PETA and their followers would put a stop to their extinction, leaving us frightened in our own homes over whether or not that sound was “thunder” or some dinosaur taking a nice stroll in the neighborhood on a Sunday afternoon. I think the same concept regarding bears.

So my question is: how do lions, tigers and bears (oh my) affect our ecosystem? The only explanation about our ecosystem on 60 Minutes was referred to the money that comes in through tourism. Great. So we have people coming into Africa, treating it like a three ring circus and leaving their civilians in great danger. Which is more important: the value of the dollar or the value of human life? You choose.

Just as I would love to see bees extinct, because if I get stung, it means death-- I do not want them to be extinct because I know how important they are to our ecosystem. If there were no bees, there would be no humans left eventually.

I love animals just as much as the next person, but when does it come down to thoughts about pushing the king of the jungle out of its habitat and into extinction?
60 Minutes Debra Pasquella lion attacking people lion attacks lions being poisoned