Sarah Palin Ain't Got Nuttin' On Me!

Another sunrise, another groggy stumble out of the bedroom trip over and fall down trying to make it to the front door type of morning, in hopes that none of my neighbors see me fumbling for the packaged up newspaper on my welcome mat that the paperboy flung so violently at my apartment 4am, waking me up and disturbing my sleep only leaving me to wake up even more tired and grouchier at 6am. (What a run on sentence that was!) All I could hear was a “thud” and his little feet running down as though there was a massive fire.

Instead of our usual coffee, I poured some espresso grinds into the regular coffee machine to give it an extra punch. It’s been a helluva’ week with my dress situation and I inevitably became Madelene’s worse nightmare: BRIDEZILLA. At one point, the words, “let’s just forget about it” came out of my mouth, as Madelene stood there in horror (or relief)---not quite sure. I had to get the perfect “under gear” for the dress, because, umm, well, these puppies needed a little lift in the ‘right direction’ and a little tuck in certain areas, so I wanted things to appear much smoother than normal. It was quite the task. I’m not the type of person who loves to try things on in stores. So, I ordered every fricken thing that I am wearing online from Victoria Secret and Macy’s. I absolutely detest shopping. Accessories are the fun things to get in stores. Oddly enough, I always find luck shopping online.

After being fitted, I thought it would be nice to visit with ma and pa up on the mountain. Of course, the clamato bloody marys were flowing at 11:30am and dad was hauling me off to split some wood with him.

As my dad and me walked over to the huge woodpile, he threw me his rifle. 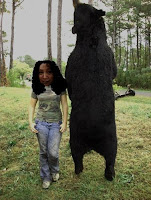 I know my father has had some neighborly problems, but this wasn’t the solution. Apparently, there has been a huge monstrous bear walking around, rustling through everyone’s garbage. One lady that lives down the road from my parents' house saw him taking birdseed out her feeder. She clanked on a bunch of pots and pans to scare it away, but he wasn’t the least bit frightened. He moseyed along his way down back into the woods.

It was then when my father explained how he saw the bear near his garbage bins. The bear wasn’t afraid of him at all, so my dad got back into his truck and started driving. The bear just stood there and stared. Not a flinch. Usually, bears will run from you. If you make noise or yell, they 'usually' scatter back into the woods, but not this bear. He has to weigh around 500 lbs or more. He’s MASSIVE. 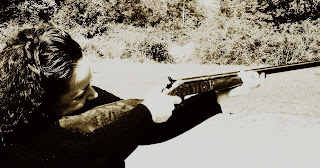 So there was, putting wood on the splicer with my rifle ready to go, if the bear should turn aggressive enough to attack. I guess he’s just storing up for the winter and trying to look for food. I didn’t want to look like a huge pork chop to him, so the rifle gave some sort of comfort at this time. We drove back to the house on a tractor and piled the wood neatly onto the bins. I kept the rifle nearby anyway. I started liking having a little ‘power’. I had a rifle in one hand and a delicious bloody mary in another. Sarah Palin got nuttin' on me now.

What a great morning!

EDIT: The below video is about a wife who was way too curious about her husband's gun. I warn you...it is very funny!