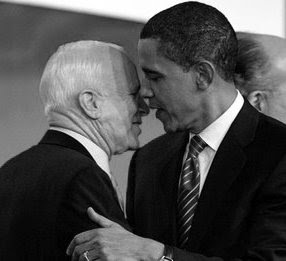 It’s tricky trying to communicate politics when there are so many people who have a variety of opinions, faiths, lack thereof and personal convictions that lead them to sway either to the left or right. Our personal needs have to be met in order to consciously pick a candidate that comes close to what our values are. No one is wrong or right in my opinion: it’s all about what “you” need from a president. Even so, if one or the other is chosen, will your needs still be met fully? I’ve voted for Clinton in the past and I still haven’t had “my needs” met, however I felt that he was a great president, regardless of his oral fixations.
Discussing politics can be pure mental masturbation if you don’t see eye-to-eye with another person on the same views. People always try outwitting the other by claiming that this value and credential is more important than the other. Isn’t it all “personal”---which is the main reason why we have a voting system? So, if I vote Republican, most likely my rights as a lesbian and marrying legally probably won’t be met, however putting God and my beliefs as a Christian first and picking a leader with the consistency of his or her beliefs are much greater in the bigger scope of things for me. Even if I were to vote for the Democratic Party, my needs in one president will still be lacking most likely.

This year the election is sort of circulating around social stigmas and cultures, which most of society is attacking one another with. Whether it’s the lack of religion or whether or not it’s a male of female or black or white----it comes down to social stigma. In most cases there are people who will not vote for a certain candidate because they're not a female, or they’re black or white as well as-----“he’s hiding behind his religion and guns”. The most recent comment I got regarding this was: “…If I were the boss I would choose the younger more energetic person who will be easy too work with.” Isn’t that discrimination of age--- “he’s too old” type of mentality? Older, wiser, more experience as opposed to younger, more energetic and lacking experience, but willing to learn as they go? That idea doesn’t sit well with me, especially talking about a leader for our country. “Oh let him have a shot at it!”

For me, I’d rather an old professor who’s been teaching for many years rather than learning from a new kid who just got out of school trying to teach a lecture hall full of people who need guidance.
I feel safer with the older & wiser types.
at September 05, 2008