Great Lengths to Befriend a Neighbor 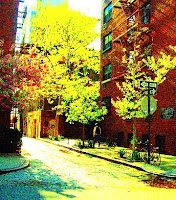 What a faker! Usually on Friday mornings, I’ll go outside on my deck with a strong cup of coffee before I start working. I always need a little ‘deep thought time’ while garbage trucks rumble throughout the neighborhood and delivery vans are continuously backing up, “beep beep beep beep” never moving forward, so it seems. Sometimes if I am asked to do a certain article about a particular subject that takes a little more meditating time or requires much more brain cells than I can possibly muster up; I can only hope that God comes down from heaven and zaps me with an epiphany or two. So I sit outside on my deck overlooking the next building, watching the people scatter to their cars to head off to work and leisurely people walking their dogs without a care in the world, hoping that my juices start flowing.

Back to the faker… There’s this guy that lives across the way who sits outside and works on his laptop. It’s a gorgeous morning and the sun is shining bright. Who the hell could see anything on their laptop while sitting outside in the sun? You cannot see a damn thing! I’ve tried!

I’ve just recently noticed his little appearances lately. I’m out there all the time, weather permitting. I can only use my laptop outside around dusk or at night, where I can actually read what’s on the screen. Occasionally he’ll be outside talking on the phone and pacing back and forth on his little deck. He sees me. I see him. Eventually, it becomes one of those, ‘he’ll be out there’ type of intuitions, so subconsciously, I sort of put on a nicer sweater or something more “presentable” because I now have an audience, or so I think…? In my head I say, “Naw, it’s just a coincidence that he’s out there the same time every morning lately.”

I saw his head lift up from his laptop. It appeared to be that he was looking over my way. I can only guess. For the love of God I’m not gonna run into my apartment to get my binoculars to know for sure. That would be kinda’ creepy on my part. So I sat and pretended as though he was looking at something else.

I looked up. It was him talking. Was he talking to me? I did one of those, 'you talking to me' motions, and he nodded and said, “Yeah, cool out, right?” We’re both sitting outside in 55 degree weather basking in the sun trying to get warm. I have this oversized hoodie on while he’s out there in a white t-shirt and sweats. See, he has the excuse of a laptop to continue sitting out there, but for me, I only have my cup of coffee and a blank look.

“Yep- it feels like fall!” I tried to appease him, took a sip of my coffee and wiggled out of my chair to head inside. Nothing is worse than weather talk. Then he catches me…
“I hear the winters here are brutal.”

Now I have to continue weather jabber from across. the. street. We’re practically yelling at one another about the weather.

“It’s not too bad. They’re really good with plowing around here and we’re right in the middle of everything anyway.”

He explained he recently moved here from Kenya and was trying to adjust to his new surroundings. The conversation even led into why he moved here. He explained to me that he’s a writer and got an offer from a major company/magazine located in Manhattan. He goes in 3-4 times per week and then works from home on Fridays, which is why he’s out there during “my time”. The neighborhood suddenly simmered down as though they were trying to hear us talk. We continued on chatting, no longer trying to talk over the heavy machinery and the continuous loud beeping.

He’s also trying to get his partner (boyfriend) a visa here in the U.S., which is very difficult. I was surprised he divulged that information so openly to me ...and so soon. We have yet another thing in common: we’re both gay. I felt more at ease because he was just a guy trying to make innocent friendly conversation. My heart went out to him because he’s been here for 6 months and hasn’t seen his boyfriend since. His partner is coming here on a temporary visa this coming November. They’ve been together for 18 years.

After an hour of chatting, I had to ask him…

“Can you see anything on that laptop?”

He smiled and replied, “Not really... Isn’t your coffee cold by now?”