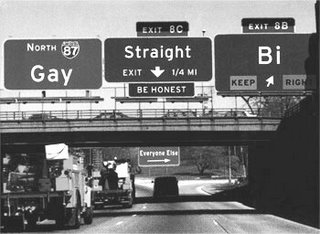 So I have developed some new readership, which I appreciate—courtesy of Dr. John. I received an email asking if my lifestyle defines me. No. I started this blog to encourage gays and lesbians to be comfortable with who they are. I wanted the ‘guilt and shame’ of being gay and being close to God at the same time to be relieved. But honestly, it was to brush up on my writing as well. I have a long way to go!

Now that I have readers who are 50% straight and 50% gay, I want to share part of my past with you. Even though I’ve always known I was attracted to women, I dated guys left and right. None of them lasted. I would usually date one guy for about two weeks, get bored, and then then move on. Sometimes, I would just date guys to cover up anyone’s assumption of my homosexuality---or desire to be.

Then there was him—a gorgeous middle-eastern man with big brown eyes, thick short black hair with the whitest smile you could ever imagine. I fell in love with him instantly. We were at a friend’s party. They had a huge house with a billiard room that had a huge bar inside it. He was sitting at the end of the bar. I came out of the kitchen, and saw him staring at me with those huge doe eyes. I smiled—and blushed unexpectedly! He was sitting alone drinking his beer. I didn’t know his age. I couldn’t even guess it. I knew he had to be about twenty years old or so, but it was hard to tell. I was sixteen years old at the time. I asked him if he wanted to play pool. Yes, I went up to him.

His English was a bit spotty, but his mere presence had captivated me. My best friend kept trying to lure me over to her group of friends—but I didn’t want to go. Kathy said, “Deb, come on, what are you doing with this man? He’s twice your age and he’s foreign!” I didn’t know what she meant. I soon found out that this guy was twenty-five years old. It was his birthday. So, basically he was nine years older than me, but he looked like ‘one of us’. He was short, slim, and stylish. I couldn’t tell his real age.

Needless to say, we started dating---seriously. He taught me a lot about his religion; being that he was Muslim, and at that time, my Christianity wasn’t strong. I was more agnostic than anything. I knew there was a God, and I grew up in a Catholic household. It was at the age of twenty-three when I became born again. 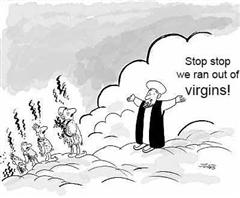 After a year of dating, we finally decided it was “time”. No, not marriage. I was scared. He had his own apartment and we always hung out there drinking beer and making out- but nothing went beyond that. One night, we were lying in his bed, and in the heat of everything, he looked at me—almost asking permission. It was then…I agreed. He was a virgin, and so was I. After that encounter, we couldn’t stop. We didn’t care where we were, who we were with, or what was going on around us. We were addicted to this 'new thing' that everyone raved about. In my mind, all I had to worry about was if I got pregnant. He wasn’t with anyone before me. I should have been smarter than that, but I was young and very naïve.

Our relationship wasn’t only about sex; we had a deep connection that went beyond anything else I’ve ever known. We were best friends. We went out, we did many things, from going out to lunch, flying kites, attending parties, walking through the park, to going out to the movies or just enjoying a quiet evening at home. We talked endlessly and shared stories about his country back in Pakistan and how he was born and mostly raised in London. He definitely had more of a history than I did, being that he was twenty-five and from another country. I listened intently. I held on to every word that came out of his mouth. After time, his English was amazing. He was becoming ‘Americanized’. (Not sure if that’s a good thing or not, but it helped him with his business.) He owned a chain of mini marts and gas stations, and was increasingly becoming more and more successful. (If you stereotype this—I will kick you in the shins!)

By the time I was eighteen years old, I quickly became an intern at a medical firm, and my hours were long during the day, and his hours were long during the night. We were passing ships without even living in the same quarters. He constantly thought I was cheating on him, due to the fact I was too tired to go see him at midnight when he got off from work. It affected our relationship greatly, and then there was the night I will never forget…

His car came cruising down my driveway fast. He was with his younger brother. He left his brother in the car and came inside to talk to me. I knew what it was. I grabbed a glass of water, and remembered my hands shaking frantically, because I knew he was breaking up with me. My heart was in my throat, and I thought I would just die if I heard those words come out of his mouth. He looked at me with those huge brown eyes, and I thought, “I’m never going to look into his eyes again!” I started crying before he even broke it off with me. I couldn’t hold it in. God! Why did I have to cry in front of him? He just hugged me, and said, “I’m sorry.”

I’m sorry. Those words tore through my heart. The perfect man, who has treated me so good for these past couple of years, is ending it all. Why? I learned how to cook for him, how to make him feel comfortable, and I gave up my virginity to this man--at such an early age! How can he just end it like this? We spoke about marriage and having kids together. We spoke about the future and growing old with one another. It was all going down the tubes as he hugged me…for the last time.

After the door shut, and I saw his taillights going off in the distance, I saw my life end right there. I went into my bedroom, locked the door and went into my bathroom to cry. I cried hard. I threw up many times. I couldn’t hold anything in. It felt like someone had died. I was hunched over the toilet bowl screaming crying and ready to just die right there. My phone rang. I thought it may be him changing his mind. It was my friend Kathy.

“Deb!” She screamed out into the phone. “Are you okay?”

I said nothing. I cried into the phone. Within thirty minutes, I had fifteen of my closest friends in my bedroom consoling me. One girl even came from an hour away by bus just to comfort me. I wasn’t suicidal, but that’s what they thought. They didn’t want to leave me alone. They all stayed with me that night, making sure I wouldn’t do anything stupid. I can’t tell you how much I appreciated all my friends doing that for me. They were total angels for giving up their entire evening, just to be with a sap who just had her heart broken.

After a few months passed by, he called me again. It quickly turned into ‘sex with the ex’ type of situation. This happened weekly. There were no commitments, no agendas---just sex. I was content with it, but I quickly came to realize what I truly wanted…and it wasn’t with him. He realized that my interest was fading, and then he became desperate.

He proposed to me. He wanted to get married and have me living in his house ASAP. What? Now? Why? I didn’t understand it, until he found out what my real situation was all about. One of my friends had told him about a girl I started seeing---Madelene. He was shocked.

“What? It doesn’t make sense. It’s like dating your sister!” He said to me, uneducated about any type of homosexual lifestyle. He came from a country that considered homosexuality as bad as incest. His lack of understanding---was indeed---understandable. I knew he would react this way. I wasn’t offended.

He and I became friends, without the benefits, and he respected Madelene. He would come over to our apartment and help us out with anything that needed to be fixed, or simply to just have dinner with us. Our friendship grew even closer than ever, and he totally respected anything that Madelene and I had together. It was hard trying to explain my love for my partner to him, but I wanted him to know it wasn’t just a “roommate” type of situation. He tried a few times to engage in sex, but I reminded him about how real my situation really was.

Every year on April 15th, which is his birthday, I always send him a card. He is now happily married to a woman who he has been set up with that lived in Pakistan. She moved to the US for him, and they now have three beautiful children together. He wanted kids so badly. If I were to live a lie, and be with him, he probably wouldn’t have had all he does right now. I am so happy he got what he ‘truly’ wanted. He deserves that. In retrospect, I don’t regret one day with him, but I am glad that I made this decision…because he would have been married to a woman with other desires for the same sex.

I only wish him happiness…and I thank him for every single day he has spent with me. Thank you Mr. R for showing me how beautiful men really are!