Jail for Jesus: Kim Davis Fueled Up a Full Tank of Anger in Many Christians

A few months ago, I took my friend out to my favorite lunch spot. We sat down, ordered a couple of glasses of wine and some lunch. When the waitress came over, my friend's entire demeanor changed as though someone upset her.

"This wine is just terrible! It tastes like vinegar and you probably had it out all night. Bring me something that wasn't opened. You may be able to fool some customers, but not me, lady...not me."

The waitress headed off to the bar and quickly returned with a fresh glass of wine, to which again, tasted like "vinegar", but she'll "suck it up anyway" as she stated. Nothing annoys me more than being rude to somebody who had nothing to do with what you are upset over. Yes, she is the "face" of the restaurant -- your representative for the bar and kitchen, but being rude to someone who is serving you is just wrong and so out of line. While walking to the restroom, I apologized for my rude friend and gave her a secret tip that my friend knew nothing about.

So yes, I get very angry when someone is rude to a person who has nothing to do with what you're upset over. I'm surprised she didn't make her stand outside in some crusty barrel stomping grapes for her. 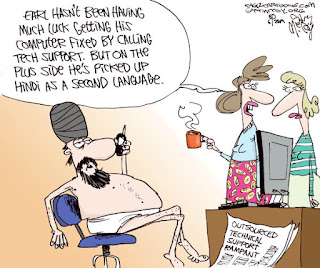 I have a few more 'anger spots' -- like outsourced customer service. I detest being thrown in some Indian customer service cue to only have to wait 30+ minutes to speak to someone who #1. Cannot understand me and #2. Cannot understand them. If I am paying a monthly fee to a company who is too cheap to hire Americans or at least, someone who is able to completely comprehend the English or Spanish language, then yes -- that angers me. I know this is neither here nor there, but I'm trying to make a point over indirect anger. I don't understand anger that has nothing to do with "you". If it affected you, like trying to get an English speaking rep on the phone who has clearly wasted your time by you continually saying, "What-what-what-what" -- then it's time to ask for an English speaking rep without being rude. How do you be nice even asking that kind of question though? 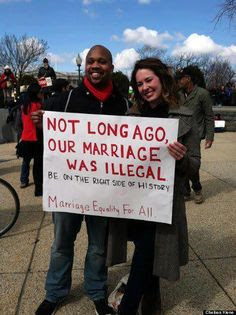 I found that on my previous post, people were outraged that I read the bible differently than they did. They accused me of "cherry picking" and wanted to disregard the fact that it was also illegal for interracial people to marry. Same-sex couples have had the same struggle. But they insisted that interracial marriages are ok in God's eyes, while in the bible it clearly states that we weren't to mesh with people from foreign lands. It was a religious law. It does still hold similarities. People took to my Facebook page and let off some steam of their own. They were angry -- very angry that I compared interracial marriages with same-sex marriages --- when in fact, it's just good old fashioned marriage now. It's legal. It's legit. And, it's all love. But they're angry.

A commenter by the name of Laura Butler said, "I love when people try to compare skin color to sexual choices. Go back to school. You are very confused about reality and are in desperate need of a real education." She was basically stating that we were confusing skin color with sexual choices. But, we were discussing the denial of our rights to get married as a couple, whether interracial or same-sex -- what is so difficult to understand about that?  Some called this woman a troll, while others stated she was hateful. But when you start a thread and you comment is "angry", you will receive some angry commenters striking back. 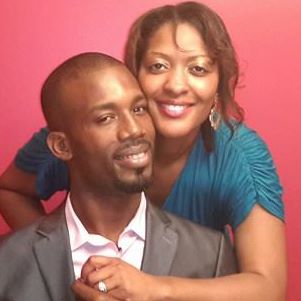 Another commenter named, Joseph Israel, who also happens to be black said these lovely words in caps, "DISGUSTING AND SHAMEFUL! WHAT A SHAME! SMH!" Another commenter pointed out that slavery in the bible is encouraged. There were so many horrible things in the past that were corrected today, but somehow, people forget where their ancestors came from and what they had to do to become part of normal everyday society. He feels that being with a same-sex partner is "disgusting". Now that's shameful to even think that. He claims he is Christian, but his behavior dictates otherwise. But as far as history goes, it states this: "African-American marriages: In the mid 19th century, African-American slaves were not free to marry as white couples were. '...marriage could only take place after obtaining permission from the owner. Southern state laws denied the slaves legal marriage contracts.' Just as some gay and lesbian couples in recent years have gone through commitment ceremonies at sympathetic churches, 'slaves...held ceremonies that revealed the seriousness with which they regarded married life.' Restrictions on African-American marriages were lifted after the civil war. Opposite-sex couples of all races were then free to legally marry anywhere in the U.S. -- but only as long as both spouses were of the same race."---read more here.  Interesting that Mr. Israel is so against those who are oppressed. 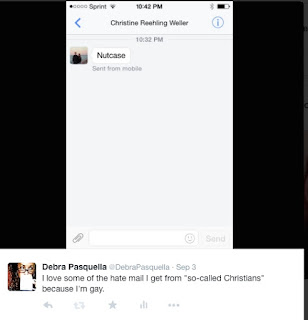 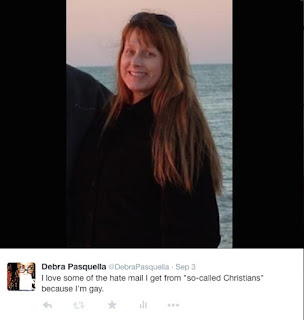 Sometimes, I receive hate mail and other types of things privately sent to me. One lady named, Christine Reeling Weller had sent me a love letter that juts said, "Nutcase."  She kept on with her messages even calling me a "spic" -- thinking that the name "Pasquella" was hispanic. I can just imagine the level of tolerance she shows to her kids with her being an adult and bullying gays and lesbians online. She's 50 something years old and she's bullying people over the internet? She needs more things to do with her spare time obviously. See, I don't have an issue with people being against same-sex marriages, but when it's out of pure bigotry and racism, then that sort of hits a nerve for me. She not only just called me a "nutcase" for being gay -- she called me a "spic" for possibly being hispanic. These ignorant rednecks have nothing to do with Christianity. They love to wave their bibles in your face, with a healthy dose of antigay and racial slurs that somehow the Bible makes it OK for her to do.

So what's my point here? 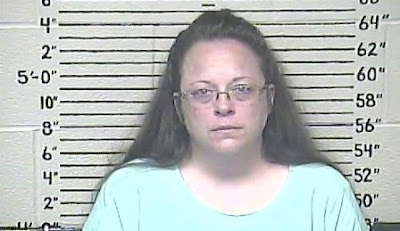 Why are people so angry over something that has nothing to do with them? How will same-sex marriage affect their lives? And don't rattle off about the 'sanctity', because that's already been ruined a long time ago. I mean, even with the story about Kim Davis (to which I am so sick and tired of hearing), as you know, she has four marriages under her belt. But hey -- Christians are OK with that, even though it clearly states in the bible that her ex husbands need to be deceased in order for her to remarry (or just have an affair). Otherwise, she is continuing to commit adultery. That's in the Top Ten Commandments in that big holy book of hers. But no -- nobody can get married on her clock if they are gay or lesbian. I've heard many Christians say, "Well she wasn't a Christian back then and now she has been forgiven for her divorces." Just as Christians tell the gay community to "repent and give up our sin" --- then she needs to "repent and give up her 4th husband" in order to truly apologize to "her god".  And of course, I don't believe that divorcing is truly a "sin" because there are so many sins in that book, it'll make your head spin, which is another reason why all of us shouldn't be throwing stones at one another. We all fall short and that's called the human condition. This is exactly why Jesus died up on the cross for us. He died for all of our sins.

Galatians 2:15-16 —"You and I are Jews by birth, not “sinners” like the gentiles. And yet we Jewish Christians know that we became right with God, not by doing what the law commands, but by faith in Jesus Christ. So we have believed in Jesus Christ, that we might be accepted by God because of our faith in Christ - and not because we have obeyed the law. For no one will ever be saved by obeying the law."

Whenever a controversial event in the news unfolds, especially when it has something to do with the LGBT community, you will get a huge backlash of bigotry from many Christians across the board. And that's really sad. They're so incredibly angry that we now have rights and that we now can marry the person we want to grow old with. What a shame that people are so caught up in other people's lives, that it makes their own lives miserable. I also wonder what their friends think when they post their public bigotry online. Or are all of their friends 'like-minded' individuals who happen to agree with the anger towards gay people?

What do you think? Feel free to leave a comment here.

For more of Deb's articles, please visit: www.debrapasquella.com or join her on Facebook and Twitter. Check out her cooking blog for some of her famous recipes!
at September 05, 2015