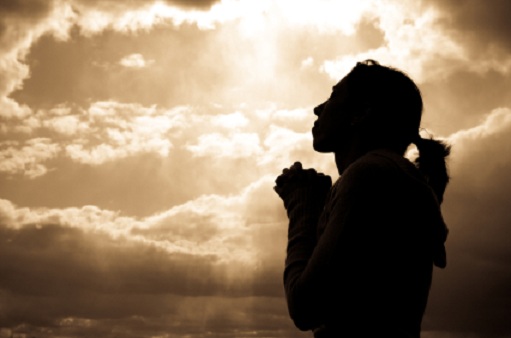 Right off the bat, I just want to state that I'm a Christian. I believe in the trinity: God, the Son and the Holy Spirit. My relationship with God is personal and beautiful. No one can tell me otherwise. Many Christians have different interpretations of what "Jesus" is like -- of what "GOD" is like and of course, what the Scriptures mean in the Bible. Some people believe that if you are not reading the King James version of the Bible, then you are being misguided and getting a misinterpretation of God's words. Many people like myself prefer the New Living Testament (NLV) so that I'm not sifting through Old English texts, in hopes of reading it correctly. Between the thousands of translations, interpretations as well as misunderstandings and don't forget, the cherry picked passages to "set things in order" by conservatives -- it can get pretty frustrating when it comes to "religion". The Bible itself can appear as a scary book with God's wrath and the destruction of cities for their "sins". There are many stories in that book that some have failed to understand.

Gays and lesbians often hear the story about Sodom and Gomorrah.

As the story goes, God says that He's going to destroy cities of Sodom and Gomorrah, if two angels cannot find any good people within the towns. Once the angels arrive, a kind man named Lot invites these angels into his home and entertains them. This angers the cities' men, and the men rallied outside of Lot's home, wishing to do "perverse actions" to these male angels. Moments later, the two cities are destroyed by fiery rain. Many anti-gay Christian ministers use this passage to say that this is an example of God’s wrath against homosexuality -- as if the men of Sodom were all gay, and all trying to "be gay with" these male angels. Historians and sociologists tell us that gang rape was a very common form of brutal humiliation of the subjects, in the ancient Western world. The Sodomite men did not come to Lot’s house to have monogamous, committed, loving relationships with the male angels residing there. They came to rape these angels. Now to be fair, a commenter over on my Facebook page said that I failed to leave out an important part of this story. When Lot offered his virgin daughters to be gang raped instead, but the angry men refused and demanded his sons. This is still not homosexuality. First of all -- what is rape? It's not about sex. It's about anger. These men wanted to rape and humiliate -- and the most humiliating act would be doing this to Lot's sons.

Stories and passages from the Bible are often misquoted and misunderstood. Here's the thing: you cannot promote Jesus in anger. You cannot represent Jesus in your own guilt and bitterness towards those who infuriate you. I've said this before, but what you hate about other people is exactly what you hate in yourself. There's a psychology behind this mindset. When I receive comments like, "You're wrong" and "You're going to hell for being a sick pervert" -- I picture Jesus saying this to me. Can you imagine if Jesus was running around calling people sick perverts and tormenting them with the fate of hell? Whatever happened to Jesus: the forgiving, most loving and caring Father that sacrificed his life to save us from our shortcomings. Faith alone, a true loving relationship with God and a heart for other people is what God wants.

This passage is not to say, "Oh go out and hurt and kill people," -- it's saying that we are all imperfect and will never be sinless, which is why Jesus offered his life for us. If we don't believe that He has paid the price in full, then what do we believe in? It's like mocking his entire sacrifice and saying, "Well, I don't think it paid the entire price, I still think we need to be perfect."

Do you know what Jesus said the greatest commandment of all was?

Of course I had to use the King James version for those who would yell at me for picking out the "easy scriptures". (You're welcome.) When Christians feel guilty about their own shortcomings, it's normal for them to want to correct other Christians if they feel they're doing something wrong. It's not out of love that they're correcting you (even though they insist that it is) -- it's out of fear. They fear their own fate, and when they see Christians "sinning" in their eyes, or interpreting sin to be something that's truly not a sin -- their own guilt kicks in from being brainwashed from bigoted ministries who incorporate this type of teaching. And let's face it -- most bigots are Christians. How sad is that? I mean, you have the KKK as the extremist type and you have Christian fundamentalists with conversion gay ministries (pray your gay away type of ministry) that tries to conform society into a more of a "moral civilization". Oftentimes, being adamant of "curing homosexuality" stems from their own fears of being homosexual themselves. Most of the time, it's not their fault -- they've been brainwashed to think that homosexuality is just as bad as bestiality and pedophilia. They compare homosexuals to rapists and murderers as well. They ask, "What next -- will they want to marry their pets?" 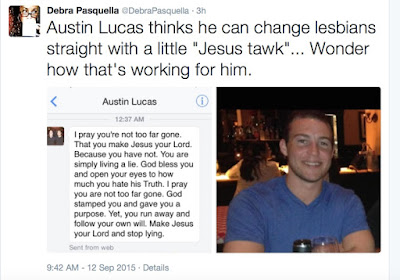 I had a gentleman named, Austin Lucas email me privately just to let me know that he prays that I haven't gone too far and that I'm living a lie. I would be living a lie if I married a man without the love behind it. That to me wouldn't be fair. Austin said that I "hate God's truth". No, I just don't go by his so-called "truth". So because I don't follow "his religion", I'm called a "liar". This is not said out of love -- it's said out of his own guilty conscience of possibly having a huge basket of skeletons in his closet to hide of his own. He doesn't want to save anyone -- he wants to bully those who disagree with his religion.  When men feel such rage against homosexuals, it threatens his own sexuality. They use religion to 'set the record straight' -- or at least, try to. 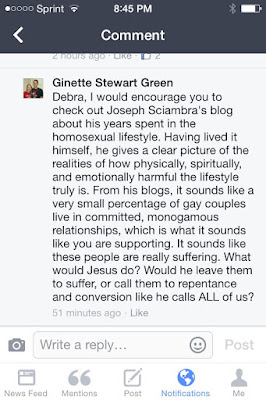 The other day, a commenter named, Ginette Stewart Green compared me to another blogger. His name is, Joseph Sciambra.  His profile reads, "Former gay porn star who now speaks out against the evils of pornography." So let me show you what I'm being compared to. One of his blurbs reads, "Somehow, I barely survived and after a decade of living as an unapologetic gay man, the bottom (literally) feel out of my world. Too sick to even crawl, I was carried away to a place of safety; at the time, I was anemic from years of continuous rectal bleeding, my anus had recently prolapsed, my immune system was shot from too many antibiotic cycles that were becoming increasingly ineffective against a repeated string of STD infections, at 29, I had lost my looks and no longer existed at the center of attention in the bars and discos, but found myself relegated to the periphery – haunting the darkened and seedy halls and lavatories of the sex-clubs and bathhouses. Most of my friends had since died of AIDS – so, I had little left to live for. Only, for some reason I couldn’t even begin to comprehend, the Lord took pity on me; and, as he did with the woman caught in adultery, not to mention the countless other social rejects, lepers and hopeless demoniacs – He said little, but He saved my life with a simple gesture of kindness: sending away those who sought my destruction and forgiving me of my sins; instantly dispelling confusion with the promise of healing." And don't get me wrong, I'm glad he is out of that reckless lifestyle -- but it wasn't about homosexuality -- it was about promiscuity. People confuse a loving relationship with sexual addiction, and that's sad. 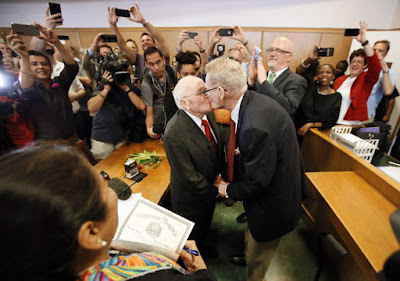 Joseph's story is not about "homosexuality" more than it is about sexual addiction. Huge difference. People perceive gays and lesbians to be promiscuous and only after one thing: sex. Look at this older couple on the right who got married? Do you think they're "perverts" or just a longtime couple looking to make their union official?  I'm not perfect, but I have never once gone into a sex club or bathhouse (if there were one for women) and I have never had random sex with strangers. I don't have a porn addiction nor have I made any pornographic movies. My monogamous marriage with my wife does not include these strange sex romps (although it may need a little boost -- neither here nor there), but why would people compare my marriage to sexual addiction than just a union -- a family unit -- with someone of the same gender?  Religious people can twist so many perverse things just to make people feel guilty so that hopefully, they'll come to Jesus. But it's not even their motives to bring you to Jesus -- it's their own "good deed" for the day to bring someone to their "god". It has nothing to do with you per se, but everything to do with their guilt -- their inner conflict with their own struggling sins. Why do you think so many Christians focus in on homosexuality? Why do you think they're condemning you and then getting angry when they see that you're not following their god? The angry Christians are the most amusing ones because they're incredibly transparent.

So next time you are faced with a bigoted Christian telling you that you're going to hell, ask them to open up their closet. You don't need their guilt-ridden trip.

For more of Deb's articles, please visit: www.debrapasquella.com or join her on Facebook and Twitter. Check out her cooking blog for some of her famous recipes!
at September 12, 2015