The Last of the Genuine People 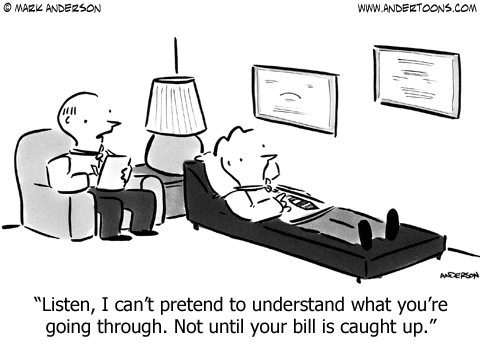 Why does it feel good when someone says, "You're not alone," while you're having some sort of conflict in your life? And it's not like, "Oh good, that sonnovabitch is going through the same crap too," but it's more about understanding and relating to their problem. Misery definitely loves company because it makes us feel less crazy. (And not in that malicious 'karma's biting them in the ass' kind of way.)  Some people get on their high and mighty horse and rattle off, "Oh if they only knew how tough I have it, they'd stop complaining." Whether circumstantial, emotional, physical or other, we all suffer in some way or another. We all have a cross to bear. "I'll be here for you," doesn't mean shit anymore. It's a text or two, maybe even a phone call and then that's where it ends. People can't do more than that because they have their own issues to deal with. The one thing I've learned is to never compare your situation to someone who is incredibly less fortunate. Just listen. Someone's complaining about their marriage or that their house just foreclosed, and you try "relating" by saying that you just missed a Louis Vuitton sale that marked their $20,000 handbag down to $10,000 and that your world is crumbling down. Then to throw salt in the wound, tell em', "See? Everyone has their own problems."

I guess you can say I'm just tired of fake people and their pseudo excuses. They can 'talk the talk' like most, but can they walk the walk? Actions speak louder than words and my God I am using a lot of platitudes with this paragraph. My apologies. It's like those "humble braggers" who plop on a status message saying, "Wow, my feet are swollen from standing up all day volunteering over at the soup kitchen." That status message screams and begs for, "Aww, good for you! What a great person you are!" Notoriety's a beautiful thing, isn't it? To be known for doing something good - for going out there and making a difference. There are times when bragging about what you do for the 'good' of people is great -- because it encourages other people. It's all about your motives and I totally believe that God knows every single motive and intention behind each action. I wonder, does he also know the motive behind this post? Of course he does. Now slip into a pair of someone else's shoes, stay for a while and just see how things really are. Do you still wish to keep those shoes on?

The rant goes on…

Today, as Madelene and I are digging out, we were just talking about how unfortunate that none of the other neighbors (except our our friend next door) want to pitch in and help keep our entire private road plowed and sanded. Nobody plows. Not. one. person. The sad thing is, all of them have these huge pick ups and backhoes with plows on every one of them. They screwed up our once safe private road by digging a trench 3 feet deep so that they could build more houses on this road, but their money ran out and they never fixed these dangerous trenches. I can't even tell you how many cars fell into these pits. Even the asshats that built the trenches fell into it themselves. They want everyone else on the road to pay for their mistake. So now, Madelene and I pick up the bags of salt and sand, and our next door neighbor does his best with his little ATV and plow and sands the road. But this road needs much more than an ATV to handle it all. Anyway, as we're shoveling through, we see this huge pickup truck come and plow us out entirely. It was my Dad's friend. We offered him money and he said, "I would never take money from you girls! You're practically family." Then he asked, "Why aren't the other neighbors helping with this?" He said, "We're the last of the good guys around. Your dad did everything without asking for money." It's so true. Nobody wants to do anything for anyone anymore and they all place the blame on 'the other guy'. It must be nice for the guy who has the means to help out. Our neighbor called him to ask if we all pitched in, would he be of any help. "No." End of story. He's in his house probably warm by a fire while 3 girls are doing all the work for him. You're welcome, douche bag.

For more of Deb's articles, please visit: www.debrapasquella.com or join her on Facebook and Twitter. Check out her cooking blog for some of her famous recipes!
asshole neighbors helping others last of the good guys sincerity