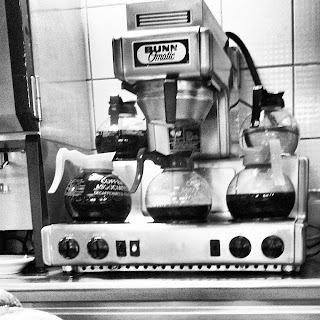 Each time Madelene and I stop off at a diner, we sit at the counter. Even at a restaurant, we eat at the bar. At the table, it's like your begging to be served, waiting and waiting and waiting. If you're the type to drink your fine wine with a crazy straw, then the bar and counter may just be your cup of tea. Quicker service. I found myself with an hour to kill in between appointments yesterday afternoon. I was hungry, I was tired and needed coffee desperately. I walked into the nearest diner by myself, and sat in between two old men wearing similar flannel shirts and baseball caps (with some sort of company logo on it). I grabbed a stool and put my keys and phone down. The waitress quickly noticed me and said, "Do you need to checkout, hun?" I was a little confused. "I didn't even order yet." Her cheeks turned bright red and she let's out an, "Ohhhh, you're ordering food to go?" As I sat down in my seat, I said, "No, to stay please." She just stared at me sitting in a sea of old truckers. I got this feeling not many women venture to sit among the "counter people". I wasn't offended at all, but the waitresses all looked over at me as if I was this brave pioneer breaking the mold for all women across the nation. In fact, when Madelene and I go and sit at the counter together, I never noticed that we were the only women sitting there. I just hate sitting at a booth waiting for a coffee refill. 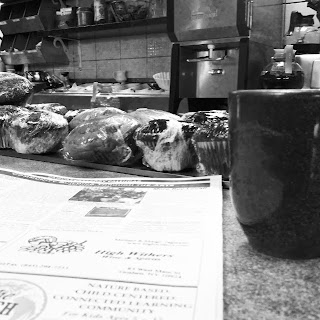 The good thing about dining out alone is that you're entertained by strangers. As I flip (pretend reading) a newspaper they have set for the customers, I began to eavesdrop on two girls probably in their mid-twenties sitting at a booth right behind me. They were arguing over something about someone's relatives staying at their home. At first, I thought, are they sisters? Roommates? Then it was clear it was a lesbian couple. I always assume I'm the only lesbian in this city. As the quarrel begins to heat up, one girl says, "I shouldn't have to move all my stuff in the guest bedroom so we can fake being roommates just because you're not out yet!" That's when every single word in my newspaper turned Greek.  The other girl retorts with, "You know how my parents are and I don't want a huge dramatic scene during the holidays! Just do it this one time and I promise I will talk to them later this year." I'm not sure if these girls lived in an apartment or house --- it was unclear, but I cannot imagine how that girlfriend felt --- almost like being hidden as some "friend" or worse off, "roommate". The whole dynamic changes. I'm sure the parents look at the "roommate" thinking, "Don't you have a family to go to? Why are you here all the time?" And sometimes, the parents already know because c'mon, it's obvious. I remember an old manager of mine tried to hide her sexuality. She lived with this really nice girl who wasn't the most feminine of the bunch, and they both owned the house together. What friends go in on a house? It's not like sharing a tab…at say…a diner. Anyway, my manager finally came out to me and I 'tried' to act surprised. 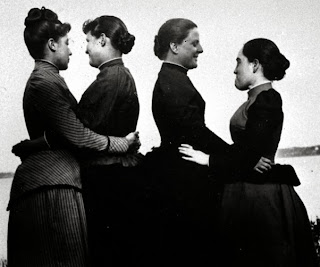 When I came out of the closet twenty years ago, I remember Mom saying, "Don't ya tell ya fatha'!" But I eventually did tell Dad. He was much more accepting than I thought he'd be. I was very grateful not to have two cement blocks tied around my ankles. One evening, Mom said, "Well, why don't you see a psychologist?" And Dad (as quick-witted as he was) said, "Why? Is she gay too?" And he let out such a belly laugh that it lightened up the whole 'offense'. But, in those days (I'm acting like this was a century ago), it wasn't accepted so much. Gay marriage meant renting an apartment with your significant other. Voila -- you may now kiss your bride! Nobody ever heard of "gay marriage" or "marriage equality". Hell, we hardly even heard of other gay couples. They were all the "freaks of Greenwich Village", in straight people's minds. There were no 'gays' in our town. If "the gays" were around, they were all hiding under rocks in fear of their religious parents disowning them. I've seen that happen to a friend who was eighteen years old. Her parents found out she was gay and kicked her out. She lived in her car for over two months. Those two months happened to be during the winter. She stayed at my house for a few days, then headed to another friend's. It was sad. I couldn't imagine being the girl who lived in the guest room while family arrived. I couldn't live with myself if I couldn't be my significant other's *significant* love. When you hide the love of your life, you're hiding part of you - the part of you who is your other half. If you're comfortable hiding, then you're not comfortable with yourself. To fear the prejudices of others is a reflection on what you also feel about yourself. Usually, that's the case. Maybe you believe that being gay is "wrong" and "sinful". You need to work out your own demons before making someone else hide out in shame for who they are. 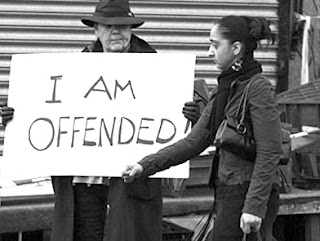 I'm glad I sat at that counter. It made me realize there are still people out there that have to hide from their family or friends due to their lifestyles. Remember when it was called, "alternative lifestyles"? How much of an outcast does that make us sound? It also made me sad to think that most of this has to do with  religious beliefs or "morals", meanwhile marinating in their own "sins". I wonder what the truckers next to me would have thought if they knew I was a lesbian sitting among them. "Dem gays are going ta' hell!" Or, maybe something perverted otherwise. Or, maybe I'm being the judgmental one just by assuming that. Maybe they'd lift their coffee mugs up and say, "Well good fer' ya!" But just like the waitress who was shocked I was sitting at the counter -- as if I didn't belong or just that she wasn't exposed to many women sitting at her station -- maybe it's the boldness, or rarity that catches them off guard, making "us" feel outcasted. Instead, I took it as a compliment, like, "Wut's a nice girl like yew' doing in a place like this?" I've also gotten on more than one occasion, "But you're such a pretty girl, you can get a nice man for yourself." All of those small-minded statements are just that --- lack of exposure of the real world. I never take offense to it all. I just say, "But I don't want a nice man. I have a nice wife who loves and cherishes me." You can either take the "offense" and absorb it, or you can take the offense and realize how uneducated and unexposed some people are. That's all up to you. Or did you find this offensive?

For more of Deb's articles, please visit: www.debrapasquella.com or join her on Facebook and Twitter. Check out her cooking blog for some of her famous recipes!
coming out homosexuality gay marriage gays and lesbians in the closet LGBT marriage equality morals religious beliefs