- December 20, 2013
Who is Duck Dynasty? What is Duck Dynasty? I never heard of this reality show until recently, when one of the stars, Phil Robertson made a few comments regarding homosexuals and black people. Everyone was offended. Apparently, this is a show based on some hillbilly in the south who made millions from their family-operated business, Duck Commander, operated in West Monroe, Louisiana, which makes products for duck hunters. Not bad. I guess anyone can get a reality show these days. I never watched it so I really can't be the judge whether it's good or not. But seriously, who gives a flapping rat's ass over what this old hillbilly has to say about anyone or anything? He's almost 70 years old and lives in the south. EXPECT IT! We're all so offended! Phil even got fired from his freedom of speech. The funny thing is, I was more shocked over his comment made about black people because it's completely untrue.

First, my initial "offense": black people being "happy":
He said, "I never, with my eyes, saw the mistreatment of any black person. Not once. Where we lived was all farmers. The blacks worked for the farmers. I hoed cotton with them. I'm with the blacks, because we're white trash. We're going across the field. They're singing and happy. I never heard one of them, one black person, say, 'I tell you what: These doggone white people' -- not a word! Pre-entitlement, pre-welfare, you say: Were they happy? They were godly; they were happy; no one was singing the blues."

There was no mistreatment of black people in the past? Are you kidding me? Maybe his eyes were too hazy from all the moonshine, but isn't that why some black people are still pissed off till this day over their ancestors being "mistreated" --- and that word is such an understatement. He says he hasn't heard a black person complain about white people? I still hear it today and most of it is legit from what they go through. Some like any minority pull out the race card or even the 'gay card', but think about why they do that. Because they were mistreated. They expect it again. And I'll be damned if I saw a black person (or white person) before or on welfare NOT complain, unless of course they're racking up more kids to get more money. That's another story for another article though.

What a tricky slope when it comes to the blacks and gays. Maybe this was a publicity stunt. You never know By him getting "fired" doesn't mean anything. The producers most likely said they fired him and most likely, you will see Phil Robertson back on the tube with his overalls and duck whistles.

“Everything is blurred on what’s right and what’s wrong. Sin becomes fine. Start with homosexual behavior and just morph out from there. Bestiality, sleeping around with this woman and that woman and that woman and those men. Don’t be deceived. Neither the adulterers, the idolaters, the male prostitutes, the homosexual offenders, the greedy, the drunkards, the slanderers, the swindlers -- they won’t inherit the kingdom of God. Don’t deceive yourself. It’s not right.”

Then he went on to say in his own colorful words, "It seems like, to me, a vagina -- as a man -- would be more desirable than a man's anus. That's just me. I'm just thinking: There's more there! She's got more to offer. I mean, come on, dudes! You know what I'm saying? But hey, sin: It's not logical, my man. It's just not logical."

There is so many things wrong with what he says on so many levels, but in my mind, I find this comical. It's the rhetoric, yet colorful version of a supposedly "God fearing good Christian", but what do you expect from this ducking dimwit? I have heard quite a few times from ignorant people regarding gay marriage, "Oh what next, they gonna marry their cats?"

Romans 1:26-27: “Even the women turned against the natural way to have sex and instead indulged in sex with each other. And the men, instead of having normal sexual relationships with women, burned with lust for each other. Men did shameful things with other men and, as a result, suffered within themselves the penalty they so richly deserved.”

Even before that verse, there’s another verse that clearly states what’s been happening in this book.

Romans 1:24 “So God let them go ahead and do whatever shameful things their hearts desired. As a result, they did vile and degrading things with each other’s bodies. Instead of believing what they knew was the truth about God, they deliberately chose to believe lies. So they worshipped the things God made but not the Creator himself, who is to be praised forever. Amen.” 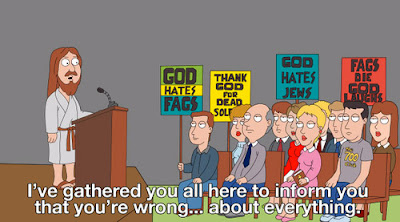 These people they speak of in Romans were having sex with many people. The entire sexual practices were based on orgies and reckless sex. Promiscuity has been confused with loving relationships. People will interpret these scriptures and claim that homosexuality is a sin. Homosexuality in the terms of loving relationships is not a sin. In fact, Jesus never said one word about homosexuality. He did say this though: “Stop judging others, and you will not be judged. For others will treat you as you treat them. Whatever measure you use in judging others, it will be used to measure how you are judged. And why worry about a speck in your friend’s eye when you have a log in your own? How can you think of saying, ‘Let me help you get rid of that speck in your eye,’ when you can’t see past the log in your own eye? Hypocrite! First get rid of the log from your own eye; then perhaps you will see well enough to deal with the speck in your friend’s eye." ~Matthew 7:1-5

So all in all, I'm not offended in the least about his version of the Bible and his opinion about other men's a-holes. It's funny when you hear a bigot talk about homosexuality. They always reference to sex and never think about the loving relationship. If they talk about a straight couple, they think about marriage and kids --- "a family unit". Their ignorance is beyond their control because their exposure to anyone different is limited. So why be offended? I admit, I was a bit taken aback with the comment about black people because he was way off, as he was with homosexuality, however each person interprets homosexuality in the bible differently. It's all about how you understand the written word, what you believe and how tolerant you are with others who are different than you. Even if homosexuality was a sin, didn't Jesus hang around with the sinners? Didn't Jesus die on the cross for our sins? Doesn't God love all of us? We didn't even make it in the Ten Commandments.

Are you gay and concerned about what the Bible says? Please grab my book at Amazon.com and let me explain the scriptures to you. It's a down to earth book that makes you wonder about all of those translations, interpretations and misunderstandings of the scriptures that some people love to cherry pick in order to bash those who are different. Click here to grab a copy!

For more of Deb's articles, please visit: www.debrapasquella.com or join her on Facebook and Twitter. Check out her cooking blog for some of her famous recipes!
bashing gays duck dynasty homosexuality phil robertson racist racist remarks who really cares