The Apocalypse is Upon Us 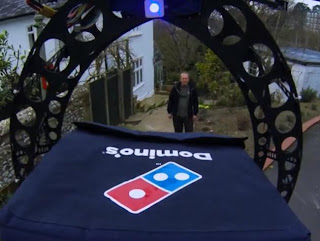 The other morning I was having breakfast with Madelene watching the news. A short news clip came on showing that Domino's is trying to deliver pizza with drones. I thought it was a great idea, until Mad shot me a look of concern. I'm like, "Isn't that great - you just answer the door and this things hovers until you grab the box of pizza. No tipping!" The sad thing is, I hate pizza. But you see my point. Madelene said, "No, not 'great', Deb," and then leaves the room to finish getting ready. I started to ask why and realized she was insinuating that this is the beginning of the end - 'they're all watching us' type of mindset. She reminded me that they're probably watching us with little drones that are the size of a fly. The way I think about it is -- if you're not doing anything wrong, then what's the problem? Why would anyone want to spy on me? Fine, you wanna peek at my fat ass then have at it. She then went on to say, "They are trying to learn about you." I just gave her a blank stare. I mean, I'm all for conspiracy theories, but this one takes the cake. OK, so they "learn about me". They learn I'm too boring to be spied on. I feel safer that there are cameras on our streets. These cameras have caught kidnappers and rapists -- isn't that a good thing? We got them off the streets because of "big brother". But no. Mad disagreed with me. "The devil always comes as an angel of light." So, basically saying that you will be blinded by all the positiveness of whatever looms in the darkness so to speak. I can't wrap my mind around that for some reason. One world order, a dictator, the government is going to control us, put us away in camps, yada yada yada. And believe me, I don't necessarily trust the government too, but I'm not letting that destroy my peace right now. I'm too obsessive with other issues in my life. Put that into the mix and I'll end up in some psyche ward soon enough. 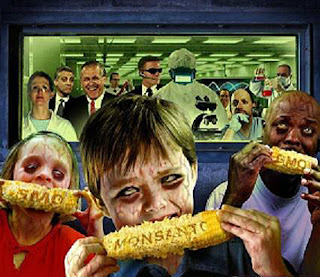 My new obsession deals with the government putting tainted shit into our food. We have GMO and hormone filled produce and meat to contend with and this affects us "now" as we live -- not when we're no longer here. It affects our health, our children's emotional and physical well-being.  I guess you can say my new "obsession" is based on fear, or perhaps based on health - I'm not sure which. I guess it goes hand-in-hand if you're a hypochondriac: fear of getting sick - fear of dying. All relevant. I am seeing more and more people turning into "hypochondriacs" or what some would call, "health freaks". I've been doing a lot of research online and through friends who are much more knowledgable than I am about chemicals and hormones that are pumped up into our food. Kids are drinking milk that has hormones in them, causing them to have emotional issues and overdevelopment in many young girls. The antibiotics used in order to beef up the animals are consumed by...us. This is another reason why we're going to be resistant to all antibiotics pretty soon, causing us to not recover from the flu or any other type of illnesses and infections. My mantra was always, "Eh well, if this won't kill me, a Mack truck can run me over tomorrow for all I know." And while that still may be very true, why wait it out and suffer all our lives with pain, illnesses, ailments all caused by big industries trying to make a buck and pass their product off as, "food"? When children start having anxiety, depression and all sorts of emotional issues at an early age, the first thing is to go to the doctor and get what? Antidepressants! The pharmaceutical industry loves when we rely on doctors alone. Even our dog food is tainted with crap from God knows where. Vets have to make money somehow, I suppose. 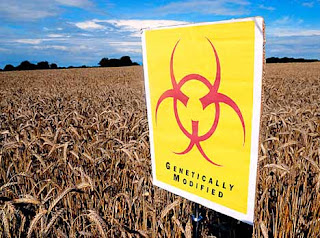 I've been following a Facebook group based on the Paleo diet. And yes, I failed a few times on this diet, but as I'm doing more and more research on it, I'm realizing it's not all about "dieting" as much as it is about cleaner food - food not tampered with by big industries. So, I'm dabbling. I'm not going to be perfect on this new venture, but I am trying to take control over what goes into my body now. The other day, I walked into the grocery store and my shopping cart was much different than it would be a month ago. Look out - because I passed up the pasta and grains. Ever since I weaned off, the distention in my upper abdominal region which was diagnosed with "gastritis" has vanished. I was never tested for gluten allergies, but I'm contributing most of the problems I have had with wheat products. Our wheat isn't the same now and as a matter of fact, Japan recently rejected the U.S.'s import of wheat because they said it wasn't suitable for human consumption. They said it was POLLUTED. The levels of GMOs that were in the wheat were unacceptable. That scared the hell out of me. I bought spaghetti squash and prepared my fresh herb sauce on it along with organic range free no hormone skinless chicken. It wasn't bad, in fact, it was pretty good to think that what I was eating was filled with tons of vitamins and not tampered with. GMOs are starting to creep up in many of our foods now. For instance, did you ever think tilapia was unhealthy? I thought it was one of the healthiest things you could eat. But it's a GMO, farm raised and it consumes its own waste. The only fish I eat is wild Atlantic kind salmon now and periodically, locally caught scallops and clams when I'm near the ocean. Fact is though, you'll never know if a restaurant is lying about their catch of the day, but at least I'm trying. I also buy from local farmers. Now there's a good and evil with that option. The good: you're buying from your local peeps which causes less emission from imported goods and you're eating fruits and vegetables that don't have chemicals on them. Win. The evil side? You better wash those greens really good. Sand will become your friend. Trust me on this one. 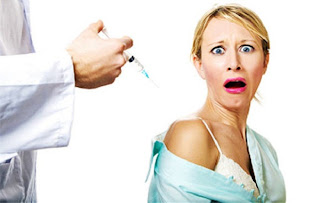 My thing is: why not control what you can control now, instead of being obsessed with things you can't control, like flying drones spying at your every movement. If it's not drones, they certainly have satellites peeking in. The last time I obsessed over the "government's evil plot on us", was the time I was freaked out about getting the flu shot because they all want us to stop reproducing and control us, perhaps even place us in a camp if we reject it, as one conspiracy theorist explained.  They said it was a liquid form of contraceptives and that the government was adding poisons in us. So, reject it if you're against it. I did. End of story. But to worry about one world order and things that are to happen years and years, possibly even when we're gone, is ridiculous and a waste of time. If it's going to happen, there is no way to stop it unless everybody and their mother protested and killed one another out in the streets like they do in communist countries. The difference you can make is to stop purchasing hormone based GMO filled produce and meats. Buy from local farmers. Make sure your milk is hormone-free. Grow your own vegetables. Stop supporting big pharmaceutical industries by purchasing overpriced antidepressants. Try a natural approach: meditation, vitamin D supplements, exercise, better food.  I'm taking the time to step out of the herd for once. And if I slip up, I'll try getting back up on the saddle again. By chance if the apocalypse arrives earlier than expected, please save room for me in your underground bunker. You will have one, right?

Want to add your opinion or thoughts on Facebook instead? Click here.
For more of Deb's articles, please visit: www.debrapasquella.com or join her on Facebook and Twitter. Check out her cooking blog for some of her famous recipes!
apocalypse conspiracy theories drones flu shot GMO food government conspiracies pharmaceutical industries spying drones