Once a Cheater, Always a Cheater? 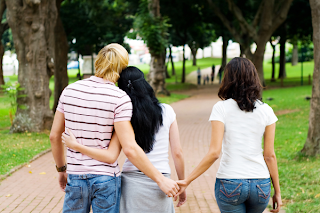 Have you ever been in a relationship where your partner cheated on you? And no matter how you found out, whether it be through word of mouth, shoddy paper trails (texts) or personal investigator, your heart is just shattered into pieces. You feel betrayed and for some people, 'less than desirable' due to a 'other options' found -not necessarily better mind you. The immediate response is, "I'll get them" -- but is it really worth it? Some people have valid reasons for cheating, and yes, I said valid. Maybe they're not being paid attention to at home. Maybe their partner is abusive. And maybe, the love has just gone out the door. There are cases where the person is just genetically geared to having more than one partner, but unfortunately, making promises to only one. And while that seems unfair, it's also a stigma to be polyamorous, which that person should be and be open about it. But, society deems it "inappropriate", and with that, more people end up getting hurt. The tricky thing with a polyamorous person is, some think it's okay for them, but not okay for their significant other to do. That's when the secrets start piling up and the paper trail needs to be deleted or found. 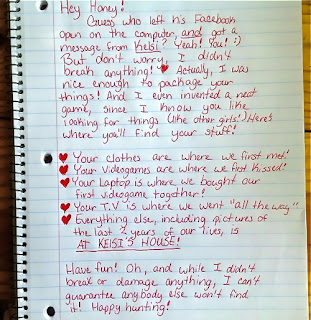 What if you found your lover cheating on you? How would you break it to them? Would you forgive them? Give them another chance? Would you confront them? And how? One girl I read about on Yahoo News found her guy cheating on Facebook and well, let's just say the letter she wrote to him (on the left) was absolutely ingenious, however, very very twisted. I loved it. A lot of people ask, "Why put so much time and energy into something that doesn't mean anything anymore?" Because it means everything to that girl. This girl took the time and energy as she did with the relationship. So why not go all out and write a letter like this? The letter went viral and basically will forever shame this guy. The only thing I disagree with is the possibility of losing his belongings due to placing them in areas where it could be stolen. Not only can she be sued in court for this, but it's just not right. I would have packed it up and left it out on the porch or in the garage (if she has one) --- this way you're not liable for any of it. But when a woman sees "red" --- nothing will hold her back, not even consequences. How would you handle your other half roaming about?

For more of Deb's articles, please visit: www.debrapasquella.com or join her on Facebook and Twitter. Check out her cooking blog for some of her famous recipes!
broken heart cheating cheating on facebook facebook infidelity Kelsi polyamorous Yahoo News