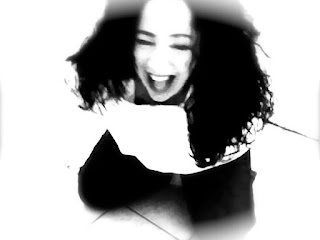 You gotta love people when they only see what they wanna see. For me, it’s been a huge problem in many aspects of my life. Having anxiety disorder and depression, I tend to overcompensate by “denying” my symptoms so that I can live a “normal” life, whatever that may be. It’s a bit ironic that when I step into any psychotherapist’s office that they all say the same thing: “You look like you have it together.” I will admit I did something pretty sneaky... I tapped into my psychiatric files once at this rundown clinic I used to go to since I didn’t have any insurance at the time. Mind you, their regulars were schizophrenics and sociopaths. The waiting room itself was a psychiatric ward full of people rocking back and forth drooling over one another. I wanted to see if they really thought I was batshit crazy. As I flipped through each page describing the same diagnosis, I was (and I admit) a bit disappointed. It said, “Generalized Anxiety Disorder”. I said out loud, “Bullshit!” It also stated that, “Patient seems to have a clean and neat appearance, takes care of herself and seems very much together.” I’m not sure why I was so furious over these ‘should’ve been’ compliments. Maybe it was because I wasn’t getting the necessary help because they couldn’t see past my appearance and demeanor. And what I mean by appearance is --- I don’t shlep into a place wearing rags. I don’t even walk out of my door without wearing makeup. I may come in with ripped jeans and flip flops, but they seem to raise an eyebrow when they see the pedicure. I’m sick and tired of doctors thinking that “I’m just fine” when I’m not. Even my family doctor asked, “You seem to be looking for a diagnosis, why?” Because if fucking hurts, why else?!?! I once came in with a significant size distention around my upper abdominal region. Doc said it was a bruised rib and told me to take ibuprofen. Got a second opinion by another doc who set me up with x-ray appointments and nuclear medicine (HIDA scans) to check my gallbladder. Said it was “sludgy” and it should be removed. When I asked the surgeon during my pre-op if my pain and distention would go away if it was removed, he said, “Oh I have no idea. I hope so. We’re just doing a process of elimination. You don’t need your gallbladder anyway.” Umm, nobody --- and I mean, nobody is flinging organs out of my body without a good enough reason. Do you know till this day, I cannot wear my favorite wired bras due to this distention I still have? I even got an endoscopy done. Doc said, “No ulcer, no H. pylori, no nuttin’ but good ol’ gastritis", which is another term doctors use for, “I have no clue what you have.” So for the past five years, I’ve been on Prilosec which clearly states that you should only use their product for 14 days.

I’m quite the regular at the ER as you know. Symptoms range from chest pain, asthma attacks, pain on the right side (appendix phobias) and the swelling of one foot (fear of clots). Every diagnosis for my chest pain is costochondritis. Basically a term that says, “We don’t really know what the hell it is.” Asthma attacks are usually treated with tons of steroids (which I love because it makes me wanna clean my house all day long.) The leg swelling is tested by a sonogram. “No clot. Stay away from the salt.” I have to say the entire staff are super nice to me. “Hi Deb. What’s new?” Seriously though, I always get, “When in doubt, check it out.” Makes sense, right? But lately I have been figuring out that some of these ailments are psychosomatic, and some not. For instance, I had to bring my mom into the ER for her wrist that literally blew up. She had pain and weakness in it. Automatically, we thought arthritis. She couldn’t even lift the big jugs of Carlo Rossi any longer. They diagnosed her with gout. Weeks later, I can’t use my left hand - left joint by the thumb - the same exact thing. (Couldn’t lift the wine either.) I seem to catch everyone else’s ‘bug’ so to speak. My sister had an asthma-like attack and then I started wheezing. It doesn’t end there. My sister’s back when out one week and the following week, guess what happened? And the pain and ailments are very real. Mom pointed out how her hand curls up into a crippling position. Pointer finger where the ring finger should be and pinky where the thumb should be kinda’ thing. Days later, while playing guitar ---BAM. My hand curls up. Sympathy pain, maybe? So I am self-diagnosing myself: Hypochondriacal Headcase Syndrome.

And don’t even get me started with medical shows. I swear to you this happened the other day. I was having a severe anxiety attack, possibly the worst one I have ever had in. my. life. So Madelene, being the caregiving angel she is, says, “Oh, come sit down, let me rub your shoulders and let’s watch TV.” Sounded calming. She then turned on Dr. Oz. Do you see where this is going? Not only that, my worst fear --and FAVORITE doctor, Dr. G was on. If you don’t know her, she is a high profile doctor that does autopsies and figures out what went wrong and why someone died unexpectedly. She even did the Casey Anthony trial. Anyway, she brings out four cadavers and wants the audience to figure out what went wrong. Mind you, I would have normally turned this off, but I LOVE Dr. G. Had to watch. The first cadaver died while getting up from the kitchen table. No heart attack no nuttin’. Her first clue was that she was a bit overweight - technically “obese” (anyone over 30 lbs is technically obese, including myself.) Same age, similar weight. I immediately guessed it when she said, “She was lying in bed all day because she wasn’t feeling well and the next day just died.” I immediately checked my mental hypochondriacal files and blurted out, “Pulmonary embolism.” The next cadaver died in her sleep for no apparent reason. She was out with friends having a few cocktails, came home and went to bed. I’m no stranger to these activities. When Dr. G looked around in the bathroom, she found blood in the sink and over the counter drugs like ibuprofen, aspirin and even oxycontin. Again, I have this lifestyle (minus the oxycontin of course.) I immediately blurted out, “Bleeding ulcer.” I then had to change the station because I felt like I was sitting too long...long enough for a blood clot to form. See how this works?

Want to add your opinion or thoughts on Facebook instead? Click here.
For more of Deb's articles, please visit: www.debrapasquella.com or join her on Facebook and Twitter. Check out her cooking blog for some of her famous recipes!
anxiety disorder costochondritis depression Dr. G. Dr. Oz generalized anxiety disorder headcase hypochondria phobias