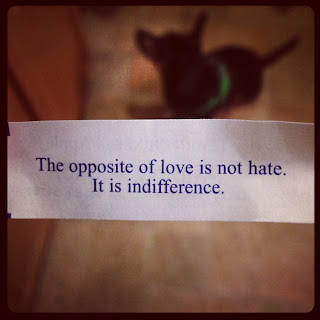 Love is strange. Love comes in different colors too. Sometimes, it even borderlines hatred if the right fireworks are set off. I believe that if someone says, "I HATE YOU" with such passion, it takes enough energy out of their soul, our of their well-being, to love you enough to take the time to hate you enough. They have one common denominator: passion. Usually a scorned ex lover will rattle this off, but usually never someone who truly doesn't want to be bothered by you. It's simply no response, no communication and every opportunity to be where you're not. It's not even so much avoidance as it is, "I really don't care" type of mindset. Indifference. It's a hard call to tell when someone is being indifferent, but enough to notice either they're not the same person or they just didn't take a liking to you from the get-go. I'm certainly no expert on relationships, love and of course, "hatred", but I have had enough past experiences to let me know which was which. I remember when I was younger, I would "hate" my ex and spew out a few unkind things about them, as they did with me. When it simmered down and time had passed, it morphed into indifference. We both no longer cared. That's why I totally believe that time heals all wounds. Breakups are the worst when it's in its first stages. First, you try to let go, you cry yourself a river and then you may hit the next stage: begging for forgiveness. You made a mistake. You didn't want things to end, yada yada yada. Then, when that doesn't work out, it turns to anger. Voila, you got yourself a cocktail full of "hatred". Whether it's a breakup, a divorce or even a broken friendship, we start asking ourselves, "What's wrong with me?" Sometimes, it doesn't even matter who wronged who. The blame is sometimes pointed back at themselves.

With certain people in my life, my "indifference" is usually based upon fear if they have verbally attacked me in a vicious way. I forgive, but the forgetting part I'm having a hard time with. I will always greet them and be cordial to them, but my behavior, my entire personality is a little different. I can't help it. I can't be the same person to that someone who had beaten me up so violently with mere words, especially someone I cared about. I'm afraid it'll happen again. I feel like a rescue dog when you try to pet their head. I cower with fear. I'll play with you a little, fetch the ball a few times, but I will never get close to you again. There's no "stability" in the once friendship/relationship. With this very issue, I turned to my spirituality and prayed about it so many times I can't even count. I even took out the Bible and came across a few scriptures that totally explained my feelings and my situation.

"Putting confidence in an unreliable person is like chewing with a toothache or walking on a broken foot." -Proverbs 25:19

"It's harder to make amends with an offended friend than to capture a fortified city. Arguments separate friends like a gate locked with iron bars." -Proverbs 18:19

There's also this one scripture that I cannot find (maybe you know it). It says that arguments will not end a friendship or relationship, it's when you insult their character that breaks the tie. Once you attack someone on a personal level, it sticks. It's engraved in the mind forever. So technically, it is completely out of my control to be the same person I used to be with those who have insulted me or had verbally beaten me up. I feel as though, if that person doesn't make a conscious effort to make it known that they'll never hurt me like that again, or at least shows their sincerity, how can I ever fully trust that person again? So, I remain indifferent for now. And that's so not like me at all.

For more of Deb's articles, please visit: www.debrapasquella.com or join her on Facebook and Twitter. Check out her cooking blog for some of her famous recipes!
breakups forgiveness indifference love and hate relationships time heals all wounds