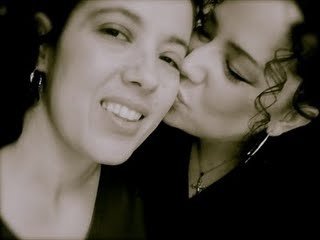 There are evenings when my wife will spend a little extra time in the bathroom putting on these anti-aging creams and 'dewrinklers' as if she was a piece of linen. She comes back smelling like fragrant mud. I admire her persistence of always keeping herself nice and looking young. I started dating her when she was 29 years old. And may lightening strike me, I still see her as 29. I ask her why does she even bother with these rituals if her skin is naturally beautiful and young, just like her mom's. She says, "Well I have dark circles under my eyes ---see? And I have wrinkles in places I never saw before."  I stare at her face --- I see the 29 year old I fell in love with. I honestly never see any flaws on her. There was even a time when Mad 'thought' she had put on weight. I never noticed. To me, she was the same beautiful and curvy woman I fell in love with. Since then, she has lost all the weight she put on, but the fact is, I never even realized it until she told me when she reached her goal of getting back to 'herself' again. I always saw her as fit. Maybe that only proves that true love is literally blind to all 'thought to be' flaws and imperfections. Even when I started putting on weight, nothing other than "beautiful" was her word to describe me, as I cringed each morning stepping out of the shower into the full length mirror. There are times when I look at an old photo of myself and notice the drastic changes in my face and think, "How can she love me now?" She met me when I was 19 yrs old. At 39, I look much different. I still receive "I love yous" at least 5-10 times a day either through text messages or while having breakfast or dinner together, and especially before we go to sleep, even when I'm feeling ugly.

Sometimes we change with age, sometimes we change with stress and other times (luckily), we seem to not change at all. I admit, I'm sitting here right now procrastinating dying my gray roots. I still want to catch my wife's eyes, and yet, I know that I'm fully accepted even with my hair up in a tie wearing a pair of ripped jeans and a tee. What about the bigger picture though? To those out there who berate one another for not looking "good enough" for them or pointing out their so called flaws. My Dad used to always say, "Doesn't ya mutha' look beautiful?" I remember him saying this all the time, even as a kid, until the day he could no longer speak. He also reminded his children that they were beautiful all the time too. We can grab onto all of those comforting phrases like, "beauty is only skin deep" and "she's beautiful on the inside". Even with plus size women, they tend to have these sayings, "embrace your curves" or "weight doesn't matter" - and to some degree, in a healthy point of view, weight actually does matter in that aspect. But in terms of the beauty - the "love" that can exude from that one person to another, that's the beauty that cannot be touched or tampered with. It's the spirit of the person - the soul that thrives outward into the world that says, "My outer appearance does not define who I am." How sad is it to see a woman with a beautifully 'symmetrical' face, a perfect and slim body with beautiful hair think of herself as "ugly" and "fat"? In fact, I knew a few of these women who seem to think they're not pretty enough or not thin enough, when the truth is --- other people see them as "perfect". That's the type of torture I would never want to have: the constant battle of keeping perfect. I know I'm saying "she" a lot, but there are a lot of young men and older men who are very self-conscious of their appearances.

Instagram now has an online beauty pageant where young girls can go online, take a self portrait of themselves and see how many "likes" they get. There is no prize for winning other than being the prettiest of the bunch, but the one who loses may also lose their self-esteem and self-worth in the process, and perhaps their own life if thought to be the "ugly duckling".  This contest is so incredibly destructive to kids who are trying to get validation that they're "pretty" enough or "hot" enough. A few weeks ago, I noticed a friend of mine (who is probably in her late thirties like me) who was posting semi-racy photos of herself. She's such a cute woman, dresses trendy and she has a great sense of humor, but her photos screamed, "Please, someone tell me I'm pretty!" One photo was a bit too much for me, granted she did look beautiful, but I was afraid that if I did "like" it, that it would seem inappropriate. So I left it alone. Many other of her friends left it alone too. She then put a status message up that said, "WTH?? Why didn't anybody like my last pic?" She felt really bad about herself that nobody attempted to "like" it. I called her out on it and said, "You don't need to do that. You're such a beautiful girl and you don't need validation from anyone to let you know you're pretty." She then admitted to me that her ex-husband used to call her "ugly" and made fun of her weight problem, so she lost like 50 lbs and began to feel better about herself. But she still needed validation from others. How can someone who claims they truly love you, tell you that you're "ugly" or make fun of a weight problem in a destructive way? The "ugly" part I don't get. Why did you pursue them to begin with? If your partner is having a weight problem, exercise with them or cook healthy meals -- constructive solutions --if that person wants it.  If someone feels the need to criticize someone else's appearance - even through frivolous chatter amongst friends, it only tells me that the person speaking has a lot of self-esteem issues. Sometimes, you have to read deeper into it.

For more of Deb's articles, please visit: www.debrapasquella.com or join her on Facebook and Twitter. Check out her cooking blog for some of her famous recipes!
beautiful women beauty contest on Instagarm beauty is skin deep insecurity issues Instagram love yourself self-esteem