Nuclear Attack On the U.S.?

As you know, I need to lessen the amount of news I watch, but when I see the tiniest briefing about a nuclear war declared on the United States, I'm going to look into it. It was as if they reported ground beef having a recall. "North Korea has their final approval for a nuclear attack on the U.S. Back to you, Bob."  And voila - it gets shuffled under the rug with the rest of the underground news that they don't want to scare us with. I will say this again and again, your biggest source of news is always on Twitter. It's not just civilians reporting on what they see - but the major networks are posting news links so that you can know what's really going on in the world. I don't know why more people aren't on Twitter yet. This is a gold mind worth of information. Not only that, the worst part of this "threat" or what they call North Korea's rhetoric is that China "may" be on their side and not so much our ally due to an economical standpoint. China's army is the largest in the world. That is one country you do not want to go to war with. Their manpower is extremely massive, dare I say even more than the U.S. North Korea alone -- eh -- but once China gets involved, that's when I get a little nervous and break my diet because well, I figure I won't be here that much longer to live my dream of being a super model. They already have loaded 2 nuclear missiles into their launchers on their east coast directed towards the U.S. 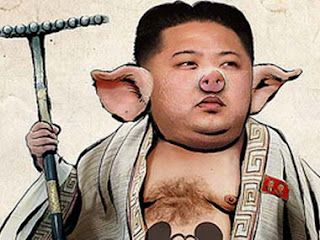 Many people on Twitter (civilians) are mocking Kim Jong Un, hacking into his Twitter account and photoshopping his pic into a pig and others just really making him into a huge joke. And while it may be funny, as I've posted a few comical photos myself, we have to remember the countries who may side with North Korea and back them up only due to monetary reasons. Most people believe it's just a bully making idle threats to the kid in the playground. I've also heard that they base their "attacks" on pure terrorism more so than actions. So does money really matter when it comes to "doing the right thing" - in terms of a possible nuclear war? Will countries back up this good for nothing evil country (I just speak for the dictator here) only because of the $$? I wonder how far it'll go. Our leaders and politicians all over the world have one thing in common: lies, greed and bunkers. The civilians have no say. We're just the victim of the madness that goes on around the world. So for now, I will have my bacon, I will drink my wine and I will surely have dessert...until further notice. Enjoy your Friday, if you can.

For more of Deb's articles, please visit: www.debrapasquella.com or join her on Facebook and Twitter. Check out her cooking blog for some of her famous recipes!
at April 05, 2013