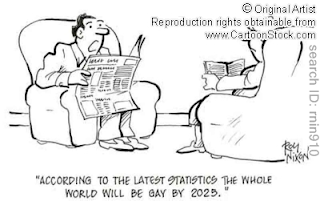 Many people think progress was made. Many people haven't heard the slew of comments and derogatory statements made toward the LGBT community for their request for equal rights. I have sought through threads on Facebook, debates on Twitter and even sadly, some very well known people who seem to be in line with siding with those who do not agree with the homosexual lifestyle. One republican named, Dave Agema. He listed some "statistics" about homosexuality. Some of it reads, "Part of the homosexual agenda is to turn people from Christianity: The teaching that only male-female sexual activity within the bounds and constraints of marriage is the only acceptable form should be reason enough for any homosexual to denounce the Christian religion." Well, I'm Christian and never tried to turn anyone away from their religion just because I wanted the same rights with my wife. I'm not sure where he gets his statistics. Another statement reads, "Homosexuals live unhealthy lifestyles, and have historically accounted for the bulk of syphilis, gonorrhea, Hepatitis B, the 'gay bowel syndrome' (which attacks the intestinal tract), tuberculosis and cytomegalovirus." I think it's fair to say that both heterosexual and homosexual promiscuous are unsafe and yes, unclean - but you cannot bulk every single person of the LGBT lifestyle together into one medical mess. Why not put the statistics up about promiscuous straight people? I'm sure your numbers will be a surprising statistic. "Homosexuals account for a disproportionate number of hepatitis cases: 70-80% in San Francisco, 29% in Denver, 66% in New York City, 56% in Toronto, 42% in Montreal, and 26% in Melbourne." They would never give you the statistics from sharing a used needle from a heroin addict. What are those statistics I wonder? Here's another doozy, "Homosexuals are 100 times more likely to be murdered (usually by another homosexual) than the average person, 25 times more likely to commit suicide, and 19 times more likely to die in a traffic accident." At this point, you really have to laugh at the nonsense homophobes have due to their hatred to those who are gays. Most gays are hurt and killed by those who are homosexual, or closeted gays who seek revenge for their lack of security with their own sexuality.

Please watch this video before reading on.


In an article in the Huffington Post, it reads, "Jack Montgomery, who has adopted three children from Washington D.C.'s foster care system with his husband Kelly Vielmo, asks the Supreme Court Justice Antonin Scalia to "consider the lens and point of view of one individual family" the eventual rulings on the Defense of Marriage Act (DOMA) and Prop 8 will affect. 'Being an inter-racial, same-sex family we are used to being conspicuous and sometimes the center of attention on a local level depending on where we happen to be,' Montgomery notes in the letter and accompanying video. 'With the cases being heard in the Supreme Court this week our family is now on debate at the national level.' Of 6-year-old Cardel, 4-year-old Raine and Ravyn, 3, he adds: 'When our children arrived we welcomed a five-year-old who was not potty trained, a two-year-old who was withdrawn, and an almost two-year-old who never learned to walk. Please understand that there were no biological impediments to the development of these children. Their situation was entirely brought on by deleterious parenting. Since their arrival our children quickly graduated from the need of any additional services to include physical, speech, and play therapy.' He then notes: 'I am not naive enough to think that any verdict of your court will change the opinions or hearts of the individuals we encounter on a daily basis. I accept that the stares our family receives walking down the street on a daily basis elicits both judgment and inspiration. What I do not accept is that the United States of America is willing to devalue my childrens’ family more than others and have a separate grouping of laws and benefits.'"

It makes me sad to think that there was a comment from the Supreme Court using the word "deleterious", which means injurious to health. It's amazing how many straight families are out there, using drugs, coming home drunk and beating their kids or putting them in harm's way due to their "reckless lifestyles". I think people are people - bad or good or unfit - it doesn't go by being straight or by being gay. It has everything to do with the individual's character and upbringing. Some say we aren't "fit parents" and I ask, who is? Show me who can do it better than two loving women or two loving men in a healthy monogamous relationship or dare I say -- marriage? I understand there are Christians out there that disagree with the gay lifestyle. That's fine. But show us PROOF of your God. Show us proof of the text which is literal and accurate and not translated into "another version" or interpreted and best yet -- cherry picked. There are more sins about adultery more than anything else, and that my friend is in the straight community more than anything. That's on the top ten list of the commandments. Not homosexuality.

It truly makes you want to fly right back into the closet and lock the door. There are such bigoted and racist people out there today - more than I have ever even imagined that I feel a bit more closed up and pensive about being open about my lifestyle in public. And when I say public, I don't mean, public display of affection --- I mean, being a couple like any other heterosexual man and woman and to be accepted just 'as is' without any judgment. But that's only in a perfect world. So I'll just be me and you just be you.

For more of Deb's articles, please visit: www.debrapasquella.com or join her on Facebook and Twitter. Check out her cooking blog for some of her famous recipes!
at April 01, 2013