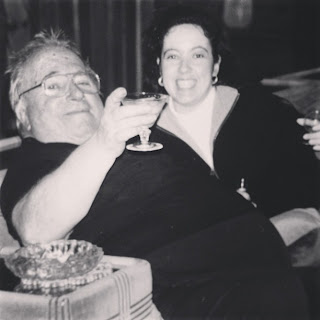 Last night, I went into the kitchen and made myself a drink while waiting for my wife to come home. I started to prepare dinner for her since it was her late night to work. I made sure her chicken was cooked to perfection, and that she had a nice cocktail waiting once she walked in the door so she could relax and put her feet up. We sat, talked for a while and discussed our excitement for our vacation this upcoming June. We've been through a rough couple of years, having my Dad pass on from his long struggle with cancer. Dad loved her. One evening, Mom had called us in the middle of the night crying that Dad had taken a bad fall on the living room floor while grabbing an orange from the kitchen. He couldn't get up. We rushed down to try and help, but he was in such pain that I didn't want to break anything. Last time, he broke a rib from us trying to lift him back up. This time, his hip was broken. Once back up on the bed, he said, "Can you get me that orange?" One evening, Madelene was with my Dad, holding his hand while he was lying on the bed that hospice provided. She said he was scared. He had such anxiety about dying. Who wouldn't? They sat in silence watching TV, holding hands with tears in their eyes. She loved him like her own father and of course, vise/versa.   He told Madelene, "I never seen a couple who helped each other out so much and did things together like you two." Often, my Dad would tell me, "You just don't come across people like Madelene. She's the best you can get. She's good people." For an old school Italian guy, his blessing meant the world to me. Mad's been there for most of my big life events. My wife has seen me cry, she witnessed me wailing on the kitchen floor when I got the most dreaded phone call of my life. ".....he's gone." My wife has stayed up late at night, trying to comfort me while I suffered with terrible panic attacks. She has driven me up to the ER numerous times in the middle of the night just to make sure I wasn't having a heart attack. She never grudgingly did it -- she did it because she loved me. I've done the same for her when she was in the hospital. I took care of her while convalescing and stood by her side every second of every hour. 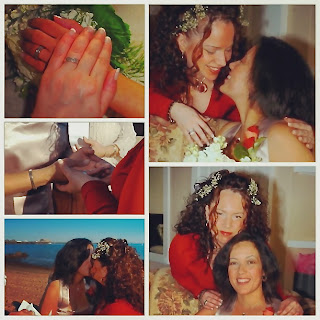 There have been good times too. Our days off are priceless to me. Sometimes on a Sunday morning, we'll sleep in with the dog nestled right in between us. We always have breakfast together. I make sure her coffee and breakfast is ready right when she gets out of the shower. When we go on vacation, we do everything, from art galleries, to dining out and to just sit on our deck and barbecue by the ocean. We still have long talks. We still communicate effectively. No, we're not perfect, but we're "family", regardless if we had kids or not. We've gone to family weddings together, funerals together, we've held each other's hands when we lost someone we loved. When we said our vows on the beaches of Provincetown, it was blessed by God and by a Christian pastor. For someone to say that our marriage is 'wrong' and that we can't love one another because we're both women --- that just baffles my mind. There are people out there who compare us to pedophiles, rapists and murderers. They have even gone so far to say, "What next? They gonna wanna marry their pets now?" The ignorance we have seen from people we don't know, to sadly, those we do know. It's so strange how certain straight people are so incredibly passionate about taking away our rights as humans to love one another and to have the same title, "marriage" to state our union. Most only make sexual references to our relationship - to our marriage. They call us "perverts" because we love one another. Not one person who is against marriage equality has stated anything of a "relationship" nature - all of it was purely sexual. When I think of a heterosexual couple getting married, I think "love", I think, "family", I think, "growing old together" --- I never think of the sexual part of it because that is none of my business what goes on behind closed doors. That's sacred between the two people who love one another. Doesn't the same apply to gay and lesbian couples? Don't we deserve the same respect? Not in the eyes of many.

For those opposed to gay marriage, let me ask you this... Are we supposed to repress our love for our partners or for anyone we fall in love with and live a lie and marry someone of the opposite sex just to go through the motions? Isn't lying one of the ten commandments? --“Do not lie to each other, since you have taken off your old self with its practices and have put on the new self, which is being renewed in knowledge in the image of its Creator,” (Colossians 3:9,10).  In Leviticus which is the Old Law which was abolished for all Christians when Christ died on the cross, it does state that man shall not lie with another man. While this is clearly stated, it also says that marking yourself (tattooing) is also a sin. This tattooed man in the photo has done the most hypocritical thing due to his bigotry. Ironic, huh? Religious people who are against homosexuality cherry pick scriptures and never reference anything toward themselves. They never fully read the bible and only take out what they want and bash us or deny our rights in the name of "their god" -- because it's not the same Christian God I know.  I guess these days people are starting to realize that it's not such a big deal. There are groups of people, heterosexual and homosexual who are in fact, "perverted", but don't lump all of us into a category that we are certainly not about. Marriage doesn't mean "cruising for sex". Marriage doesn't mean "having multiple partners". Marriage does not define pedophilia or rape - why are people so ignorant? And if you're going to use the argument that marriage was meant for procreation, then what happens when one straight couple who are married can't have kids? Do they divorce because now, they're unable to procreate? What then? They do it the way most gays and lesbians have to -- either artificial insemination, fertility drugs or ask a close friend to be a surrogate mother. Adoption is a wonderful option for many straight and gay people. Many kids out there need a loving home. And if you think "we're" not "loving" --- then please feel free to step inside our home and really see what our marriage is all about.

Take a look at our progressive world. This video is not only done with tact, logic and sense, but it's done with humor. I hope you enjoy this as much as I did. Please click here if you cannot view the video below.


Want to add your opinion or thoughts? Click here.

For more of Deb's articles, please visit: www.debrapasquella.com or join her on Facebook and Twitter. Check out her cooking blog for some of her famous recipes!
bigotry Christianity Christians civil unions definition of marriage gay marriage judgmental Christians LGBT marriage equality