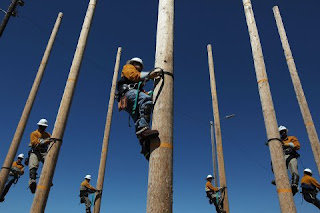 Rant 1: You'll have to excuse me for I'm PMSing a bit edgy today. I have had it up to my nostrils with customer service these days. And granted, I was a customer service rep for quite a few years -- I just don't know how people do business anymore. I also blame companies for hiring these ghetto monkeys people who deliver or come over to repair anything in your home. It's disturbing. There's a few groups of people I am referring to, so I'm not racist, I just hate everyone right now. The first group of men (because there wasn't a single woman on the job sadly), came over to put in my internet, phone and cable service. They denied me service because the pole behind my house was behind bushes. They guy said, "Oh shieeet, we ain't climbing dat!" I reminded them that they were phone technicians. This is the job they signed up for. "But there can be snakes in those bushes." They left. I called Optimum Online / Cablevision to let them know they sent a couple of cowards to my house. They apologized profusely and then sent over these kids who were straight out of a rundown alley. Observations: #1. Their asses were hanging out of their pants. #2. They were blasting rap music out of their van. #3. They reeked of pot. "Ma'am, you're gonna hafta' call the electric company to remove the brush near the pole." Again, service denied. Finally, they sent over a big brawny looking Hercules type of guy who instantly hopped onto the pole and voila --- service was on. I was so incredibly happy (being that I was without internet/cable or phone for over 3 weeks at the new place) that I invited him to stay for our BBQ & had a few beers with him. It was his last call for the evening. We enjoyed his company...and service. 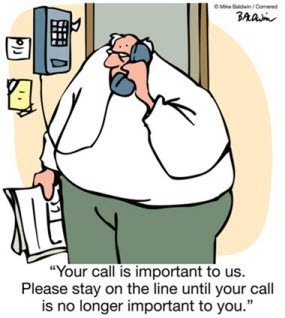 Rant 2: Back to the same company, and by this point, maybe I should have switched already. I called because I received an email with my cable/internet/phone bill. I normally pay $165.00 a month for service. It read, $330 something or other instead. And no, I didn't order any porn, besides, you can get that free on the internet, but I'm Christian, so...(crosses eyes). I literally had to sit down, take a deep breath before calling the poor customer service rep who I was planning to rip her a new asshole tell my story to so I could at least clear this up. Like they say, you can catch more flies with honey than with vinegar, right? As soon as the rep answered, I immediately said, "I don't wanna pay my phone bill" --- she laughed and said, "I don't blame you - what happened here?" --- Rapport was established. For some reason, my automatic online payments had dropped and it collected from the last month. It was no one's fault other than an electronical "glitch" in the system. I opted for manual payments now since it keeps doing this more frequently than not, but my point is --- sometimes you do get that awesome representative that makes you think, "Hmm, this company isn't that bad." Customer service is the face of all companies. And I have to say that the customer is not always right. That's just a 'motivational lie' to make you service the companies' customers to the best of your ability --- until one day you lose it and find yourself somewhere rocking in a corner of a padded room with a straight jacket on. 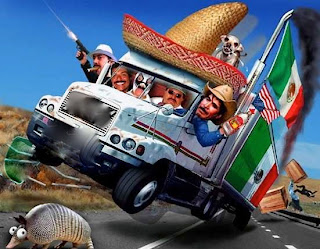 Rant 3: This one is kind of funny and cute. One day I was waiting for furniture. This was about 2 months ago. There was still snow on the ground and I was hoping the big truck was going to make it up our driveway. Nobody goes by 'timeframes' anymore --- they tell you from 1pm till 6pm and then end up being at your house at 8am. This is how it started. So while I'm walking my dog in the morning, I hear a bunch of guys speaking in Spanish guiding a huge truck down the hill of our driveway to make sure they wouldn't hit anything. There were 3 guys in the front of the truck waving him on, and two inside. There was canny Mexican music blaring out from the truck -- the type with horns and the whole deal. I watched them as they made their way into the driveway in front of my house. They were opening the back of the truck, but they had to do one thing before delivering my couch. They climbed on top of this old oak tree in front of my house - two sitting on one branch and one guy swinging from another. I seriously thought it would break off and I'd be sued. They were taking pictures because the view behind them was beautiful. But this scene was so hysterical, I quickly went to find my iPhone, but by the time I grabbed it off the counter to take an Instagram pic of them --- they were done. They were very helpful, put together everything, brought a huge couch upstairs, put together a bed in another room downstairs and basically worked their asses off. One problem: why is it any time service people are over, they need to use the bathroom? I get it - nature calls - but a longggg time ago my mother let this furniture guy use her bathroom and all of her medications in the cabinet were wiped out. I always get this feeling like they're planning or plotting something. Not only did they reek of booze, but one man asked if I was married while we were waiting for the last guy to finish up. I told him my husband was a cop and should be home any minute. No comment after that. A few times, they were on their cell phones talking about going to the bar after work. I mean, I'm no stranger to the bar scene, but come on.

Rant 4: Why are people hiring shady characters? I don't get it. If you want your business to succeed - why are you grabbing these unprofessional dimwits to deliver furniture to your customers? And this has absolutely nothing to do with nationality, race, religion or whatever --- it has everything to do with their behavior and sadly sometimes, incompetence. And I kid you not --- there was a time when I called customer service for a cell phone company and after a heated debate about charges that were on my bill, she had the audacity to ask if I was black just because I had a New York accent. I don't care what type of context it was in - you. do. not. ask. that. So, I asked for her manager, told her I was black and said that was discriminatory and she should listen to the recording of the phone call itself. One thing to keep in mind about phone companies who "claim" they record phone calls --- the company I used to work at "randomly" did when observing their employees only. Other than that - it's a free for all. I was able to switch companies without the consequences of breaking the contract. I was off scott free. So now when my phone service goes out, I just search it on Twitter to see if others are experiencing a problem before my last resort: customer service hell. /end rant

For more of Deb's articles, please visit: www.debrapasquella.com or join her on Facebook and Twitter. Check out her cooking blog for some of her famous recipes!
bad customer service customer is always right customer service optimumonline phone companies racism