We all get down from time to time, it's normal. You feel sluggish, you don't want to get out of bed and your motivation is next to none. There are so many ingredients to depression that it's sometimes hard to pinpoint what's brewing. Whether circumstantial, chemical imbalance or SAD (Seasonal Affective Disorder), everybody deals with it one time or another. Usually, right after the holidays and all of the excitement, people are coming down from their 'high', which may explain why they're either grumpy or just downright gloomy. Then again, the holidays seem to bring many of us down as it is, which is strange because the holidays are supposed to be filled with "joy", but in many cases, not. With it being only six months on Christmas since I lost my Dad, I felt more numb than depressed. It felt strange. Every single member of my family brings in their own individual vibrant glow of their own, so when one is missing, (even just not present at an event), we feel it. It's like a missing link. It doesn't help when it's below zero where stepping outside means wearing 20 layers of wool sweaters. More likely, we're bound to stay inside for the most part. Without getting enough sunlight, our vitamin D levels drop, leaving us feeling "blue" or depressed. I've been fighting it every. single. day. I take 1,000 mg of vitamin D, calcium, I exercise 3-4 times per week and try to eat foods rich with omega 3 and more protein than carbs. A friend of mine sent me this photo that explains the best foods to fight depression. 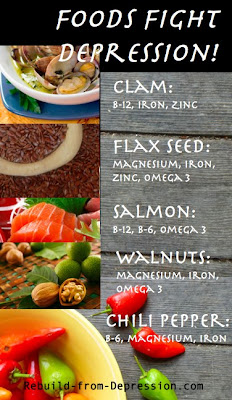 Great stuff on the list! I also told my friend that bananas are also a great mood lifter since it contains the same ingredients that are in the antidepressant, Prozac. He then stated it was better to eat avocados instead, so that you don't go crashing into a sugar low. Learn something new every day.  Avocados contain tryptophan. It's known that when our brains going into a depression, it has less tryptophan which produces a calmness, just like that turkey dinner on Thanksgiving. (Just less fattening.) Omega 3 fatty acids is also known to cut down on feeling blue. Avocados also have a lot of protein which is essential in combating depression. It releases dopamine and endorphins which are both needed to enhance your mood. Other ingredients are vitamin B6 and folate. Who needs antidepressants when you have foods available like this? A big part of how we feel is what we put into our bodies. I have (GASP) lessened my alcohol intake, maybe just a glass of wine here and there and trying to get a full 8 hours of sleep. I'm trying to fight depression off as best I can, because when I get it - I'm just a complete zombie. And while we're talking about beverages here, there is weird study that shows people who drink at least two cups of coffee a day were more likely not to have suicidal thoughts. I only drink black coffee no sugar - (plain as that might seem), but when I used to drown it out with sugar, I felt shaky an hour later, and may I add, very moody. Also remember to replenish your coffee with water. I drink one full glass of water the first thing in the morning. It helps to flush out your system since it's dehydrated, gives you energy and also gives your metabolism a head start. This one I just learned recently. It's been helping a great deal.

Stuck indoors? Watch a comedy. The other weekend I watched Bridesmaids. Remember the Target lady on SNL? She was in it. I never laughed so hard before over a movie. Watch this trailer even just for a chuckle. You know, we all can do the best we can and yet at times we'll still curl up into a ball of funkity-funk. I still research new ways on fighting off depression, and while other remedies work, some don't. So it's trial and error. The one thing that keeps me from jumping off a one story ledge is looking forward to something, like planning a vacation -- even if it's months away. The fact that you know a relaxing trip is ahead of you can make all the difference in the world sometimes. Without our little trips away (and it doesn't have to be costly), I don't know what I would do. It keeps me sane and refreshed so I can start off the year on a somewhat positive note. Even if you can only take a 'staycation' --- do something for yourself. Don't let anyone make you feel as though you don't deserve peace and happiness in your life. Those types of people are just miserable because they don't even allow peace for themselves. Misery loves company. Don't play into it. I try not to absorb people's negative energy and I just steer clear of them the best I can. Surround yourself with positive people - people who can make you laugh and make you feel good about yourself. If you're reading this right now and feel depressed, know that you're not alone. I battle with it every. single. day. Turn on your iPhone camera on reverse mode, smile and say, "I love and accept you" - and make sure no one's around freak.