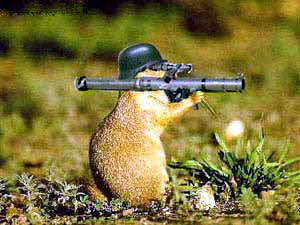 As Obama enforces tighter gun control, there are so many people panicking over this. Although I do believe the right to bear arms, for sportsmanship, hunters and of course, protecting your home, I don't see the logic in owning assault weapons typically used in the military. But there's a much larger picture here: fear. It's not even the mainstream type of fear -- fear of burglary, intruders or even an animal attack --- this is fear of catastrophic events. As we all sit and wait for the big zombie apocalypse, this even goes beyond that. After Hurricane Sandy, the lack of gas, water, supplies, etc., I was surprised over the behavior of many who were willing to throw fists at the next person on line for gas. Gas meant electricity, hot water and means of transportation for many people. It meant "life". I heard one guy talking to his friend the other day about how the world is going to need assault weapons in order to protect their family when the new world order takes effect -- almost like those 'doomsday preppers'. After the Sandy Hook shooting, the gun stores had lines out the door, no parking and a limited supply of inventory because everyone was snatching up the merchandise. It took both "Sandys" (Hurricane Sandy & Sandy Hook) to instill fear in some of us. "Oh wait - is there a correlation between the two?" the religious folk screech, as this surely must be a sign of the end times. And that's where the madness begins: religion.

Isn't God supposed to take our fears away? If we were so "godly", then why are we fearing the end times? Why are the extreme right winged Christians all fearing the worst? Is it that they don't have enough faith in God that they need an assault rifle to protect them? Isn't God enough? Or have we all gone completely mad? In a Facebook thread about gun control laws, one commenter stated on a friend's page, "One woman shot an intruder 5 of the 6 rounds in a clip and he kept coming at her hole protecting her family. So who knows how many you will need if you are a horrible shot?" I was happy and relieved that someone made sense when they responded with this, "You have addressed one of my issues! 'So who knows how many you will need if you are a horrible shot?' Why the hell do you own a gun you don't know how to use?! I think on top of everything Obama put forward, you should also be required by law to have a minimum number of training hours every month with the gun you 'have to own.'" Exactly. Why would you own a gun if you do not know how to use it?  It seems like people are grasping at straws in order to just "feel" safer. We are all vulnerable whether we have a gun or not. Are we safer with a gun? Yes, if we've gone to a gun range and learned how to use it properly. Are we safer with assault weapons? Do we really need assault weapons?

Be safe, be smart, and if you're a right wing Bible thumpin' Christian, BELIEVE God is safer than  your gun. O ye of little faith!