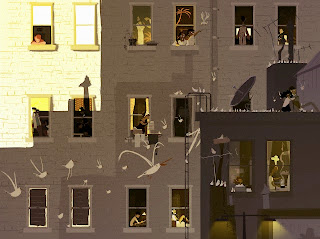 While going through a transitional time in my life, I found myself moving into a new condo in the next town over. The move was exciting: a new place, a different type of neighborhood and stores within reaching distance. Civilization. Although I had to get used to hearing other people around me, listening to cars pass on the street and the occasional love quarrel below, it wasn’t bad at all. Our neighbors were nice, mostly families, new couples starting out and the elderly. Sunday mornings, I used to love sitting outside on my deck watching this nice black family below all pile into their huge caravan to go to church. Each one was dressed up better than the other. Their children had beautiful dresses and suits on - something I’ve never seen in the churches I used to attend. Their laughter and overall joy they exuded was contagious. In my mind, I just kept thinking, wow, church was never that exciting. They must have been promised ice cream afterwards. Even as high up as I was up on my deck, they would look up and say good morning. I knew this would be a great place to live. I met a couple of nice friends around the way who I always invited to my little parties. It was fun. 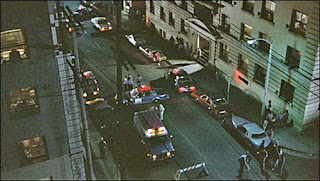 As time went on, I began to realize there were a lot of speed bumps in this neighborhood (besides the ones the HOA would place every two inches of the road). The nice church going family had moved out, different people starting moving in, as well as transients who were either waiting for their new house, or unfortunately just foreclosed on one. Upon my third year here, things got a little shaky in our own building. There are a few young couples who live here. On the bottom/basement level, a very young couple moved in. They were having a party one night while Mad and I (the old couple) were in bed by 11pm. It got louder, but that never bothered me much. I could sleep knowing other people are having a nice time. What I can’t sleep through is someone yelling, “Look out! He’s got a gun!” It wasn’t too long till the police arrived and broke up their little shindig. A few nights after that, a woman was tossing a dining room set out off from her deck and onto the street. There were pieces of wood everywhere. Her husband was pleading for her to stop, but she kept on...throwing out every piece of furniture she could find, screaming on top of her lungs like a banshee. 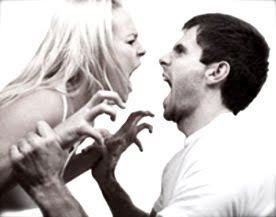 Understandably, every couple fights now and then. We definitely have our moments too. But there’s a thought that should be considered: your neighbors. The walls have ears. It’s not like you have your own house. Everyone is attached to you and if they’re not attached, they live right across from you. Our neighbors in the condo below us were always noisy - but that’s just life. You can’t stop someone from galloping like a horse if that’s the only way they know how to...walk. As we were getting an early start to go to bed, from 10pm - 1am, this couple was feuding like anything. By 11pm, things were being thrown, smashed and of course, the doors were slamming. I was wondering how their neighbors below them were sleeping. But soon enough, I saw the lights of the police drive in. It was silence, until 6am when they woke up to start in all over again. I guess noise ordinance is before 10pm and after 6am? Not sure. But what bothered me the most was the day they brought a dog home. I didn’t think much of it, until later on, as the dog grew older, I realized 99% of the time, this dog was inside the unit. The next time I saw the dog, he was full grown. If the constant barking wasn't enough to drive us insane, picture a full grown dog with a wee wee pad on the deck below us. ...Think... I kept saying, “It smells like a barnyard”, repeatedly to Mad. We couldn’t figure out what the deal was. Then we thought it was sulfur or worse yet--raw sewage, so we called the HOA to investigate and found the wee wee pads that hadn’t been changed in probably weeks. There were so many flies that you couldn't even sit out there. The poor dog was defecating onto the deck below us, leaving us shutting our windows on warm summer nights. That ended right away, and now...it’s back. It amazes me how people treat their animals. Dogs need to get exercise, especially a bigger sized dog. It also amazes me how unsanitary people can be. If you're going to live like a pig, get your own house far, far away.

So, with all that being said and written down, I’m happy to say that we will be moving out of here to a quieter place - a house - with zero neighbors next month. We actually loved our time here. They’re beautiful condos, but I’ve been noticing more and more, the neighborhood itself is getting a bit seedy. I never believed for once that would happen to this complex. Above all, we get to live in peace knowing that there isn’t a neglectful owner next door who had left for weeks on end while his boiler exploded, leaving six other families without a home. It was a very ‘eventful’ couple of years. But now it’s time to go.

(As I was writing that last paragraph, sirens came blaring into the complex surrounding one of the buildings & it's not even 10am yet.)