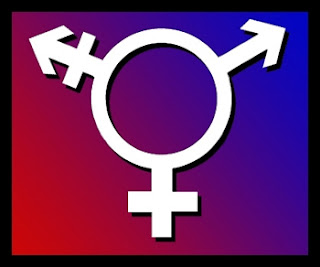 The other day, I had an interesting conversation with my mom. We were talking about a friend’s son. He’s eight years old and wants to be a girl. Everything he does is maneuvered with a feminine touch. He plays with dolls, he prefers pastel colors for his shirts, but his mother tries to reinforce boys’ clothing so he won’t be such an outcast in school or get bullied. She worries about him, and rightfully so. Since my mother knows I have a few transgender friends, both male and female, she asked me, as a lesbian, if I thought our friend’s son was gay or if he was transgender. For me, I couldn’t possibly answer that. Only the son could...if willing...if with enough time. He seems to get along well with the girls in his school, yet he has a hard time socializing with the other boys. I said it could be either or, and just because he has more female friends doesn’t mean he’s gay. Perhaps the boys in his school fear the unknown - or what’s thought to be “different” than themselves. Kids can also be very cruel. She then asked me, “Did you want to be a boy too?” It was then I just looked at her, knowing fully well what the answer was. I wanted to be a straight boy...a straight man.

In the past, we didn’t have many available options to transition to whatever gender we’d like. We were either a boy or girl by birth and we were either gay or straight. Simple as that. What my mother is having a hard time with, is the concept of which gender identity has zero to do with sexual orientation. More questions popped up: “So, your friend Danielle, (who used to be Daniel) was a man who got his sex change to become a woman, right?” So to the best of my ability, I tried answering her.
“Yes.”
“So then, wouldn’t that mean he likes men now?”
“No, she’s a lesbian.”
~Mom’s eyebrows became extremely crooked~
“Why would he go through all of that if he didn’t want to be with men?”
“Because before the transition from male to female, ‘he’ preferred women. Now, she still prefers women.”
“Then why did Chaz Bono decide to go with a girl?”
“Because she was a lesbian before ‘her’ transition, and still prefers women afterwards. The transition is about changing the gender only, not changing who you like romantically.”
“Whaat?”

After a while, it became a pronoun nightmare and I gave up on trying to get her to understand the difference in sexual orientation vs. gender identity. Now with that being said, there is a large group of judgmental people - a group of people seeking acceptance themselves, yet refuse to embrace the transgender community: lesbians. I have seen the ugliest of “ugliest” people bash transgender lesbians until they could barely breathe. It angers me a lot because not only do they not see a transgender lesbian as a woman - but they see them as men invading the lesbian community. How ironic they use the initials, “LGBT”. What do they think the “T” stands for? Clearly, if they ever got to know a transgender lesbian, you’d know without a doubt, this is not a man in disguise; an “intruder”, as they would call them. This is a woman --a lesbian. But, the fact remains that most lesbians do not get close enough to know the person on the inside. They just judge them based on transition alone and nothing else.   A while back, I had written a post posing a few questions regarding transexual lesbians. I wasn’t exposed to many transgender people, so one of my friends, (who will remain nameless) educated the best “she” could so I could be more aware and informed. While the bulk of our conversations (her choice) were entirely about her transitioning from a male to a female, she’d be quick to squark at me if I didn’t exactly understand certain things. She was impatient and had zero tolerance with people who didn’t “get it” right away. She was taking estrogen, and at times, I could surely tell just by the way she’d snap at me, and then moments later, apologize profusely. --A “man” taking estrogen has to be the most frightening thing, no less natural born women having their own amounts to deal with. So periodically, she’d go off on me, especially if I slipped on a pronoun and say “he” instead of “she”. Here’s where it gets tricky: I totally understand that proper usage of the right terminology regarding their gender is important, however in my own opinion, if the transition isn’t exactly 100%, and the transexual woman still has masculine features, it can be hard for those who are trying to understand. A slip or two should be pardoned, however I know how disheartening it may be to those who ‘feel it’ - the ones who are insulted by being called the wrong gender. After my questioning article regarding if it was difficult to find love due to the lack of completion or transition, I was called names like, “Hitler” and “intolerant bitch” from this same transgender woman. There was a time when I had told her that while I was young, I wanted to be a straight male - she said to me, “You wanting to be a straight male is like you wanting to be a black man.” So basically, she said “for me” --it was impossible. She was the same woman who stood and witnessed my wife and I marry on the beach of Provincetown, MA. I was deeply hurt by this because she took everything personal and lashed out like an angry bobcat. I found it so strange that she didn’t accept what I had shared with her. That angered me to where I said, “Well, you wanting to be a woman is like a man wanting to be a woman.” --(It was a dig.) Her statements of “feel free to ask me anything” went right down the drain, as my article posed a lot of valid questions. It wasn’t meant to hurt her - it was meant to inquire about my own personal friends within my own social life. I then told her she may want to hold off on the estrogen because it was making her into a royal bitch. Our friendship ended, but the memories of tip-toeing around her sensitive bottle of estrogen still rings in my ears.

After that entire fiasco, I did tend to withdraw from my transexual friends, male or female, but mostly the transexual lesbians. I was scared, hurt and terrified to be befriended by another. It wasn’t too long after, where I met a beautiful person through networking within similar lines of work. I remember her clearly asking, “You do know, don’t you?” She was also a transgender lesbian. At first, I wanted to retreat. That’s all I thought. But, wait...she was different. She was understanding. I told her absolutely everything I had gone through regarding my prior transexual lesbian friend. She basically took the words right out of my mouth - as if she was speaking for me - understood what I went through. “I know, I know...” she said, as she begun to understand my fear of any “slip ups” or perhaps some questioning on my part. She knew that there were transexual lesbians out there who were way too emotional for their own good, as well as all women can be from time to time. It was by her understanding, and patience that led me back into being open-minded. I almost became bitter and one of those lesbians who hated the “T” in the LGBT. I never want to become that person...and I never will. Each person has their own journey. I’m learning as I go.

So, whatever gender, or sexual orientation my friend’s son “is” or perhaps, “chooses” to be, there should be two sides of understanding: 1. The acceptance of who her son is regardless of gender or orientation. 2. The acceptance of her son on people who are simply not educated enough on this particular lifestyle, whichever he decides to go with. It’s human nature to look at someone who is obviously a male and say “he”, unless the transformation is one where automatically, you can say “she”. Vise/versa for FTMs. I’ve heard my friend state, “If a ‘man’ walks into a room with just lipstick on, he should be called a ‘she’.” My response to that, with all due respect is: you cannot expect that from every single person, especially those who haven’t been exposed to the LGBT community - the one that includes the “T” of course. I’m speaking from a person who is on the other side - a person who is still learning - a person who is willing to embrace the T in the LGBT.

For more of Deb's articles, please visit: www.debrapasquella.com
at May 17, 2011