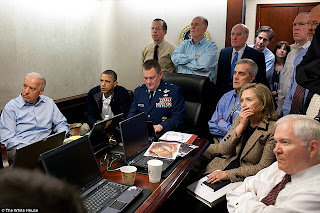 As much as I hate to talk about politics, I have to say that I am so sick and tired of hearing people insisting that Barack Obama is lying about bin Laden’s death. “It’s all for his approval ratings” --and then the conspiracy theory thugs who say it was all about the election drawing nearer. And as you’ve probably read through my blog posts and tweets, I’m not a huge fan of Obama, but more and more republicans are making themselves look like complete assholes, ie: Donald Trump. I get it. We were leery and didn’t trust many things about Obama’s mission, promises, “changes” and yes, agenda. Now I’m questioning: have we taken it too far? How many more times do we have to make complete fools of ourselves in order to see that Obama may not be all that bad? And, that question also goes for my friends who hold similar views as I do. It didn’t occur to me how bad of a rap Obama got, until it went a little too far. Now that he has done the ultimate “impossible mission” of killing Osama bin Laden, when will we stop doubting him? It will never end. 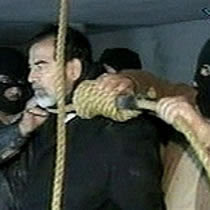 “Osama bin Laden isn’t dead.” It’s all over facebook, it’s all over Twitter and blogs across the globe. There was even a deleted tweet by Chuck Todd. It said, “Imagine how the American people would react if Al Qaida killed one of our troops...and put photos of the body on the internet.” Given the fact that bin Laden killed over 3,000 people in 9/11 attack, that statement doesn’t seem fair to compare it to one of our troops. But just think about the higher risk - the escalation of possible terrorism on our own soil, once again if Osama bin Laden’s graphic photos were to be released on mainstream media and on the internet? America has to stay classy - has to refrain from rejoicing over a death, although we are very pleased about the justice. Then I wonder about Saddam Hussein’s death. They have numerous photos of his hanging. Why him and not Osama? I then begin to rethink why Obama won’t release the photos, yet Saddam Hussein’s photos were “okay”. Maybe by showing photos that are too graphic, more bloody is a bit more disrespectful? Regardless, any death photo is disrespectful. Should we care? These men weren’t respectful themselves, but as Americans, shouldn’t we refrain from showing the public due to a rise in terrorism? Someone, no doubt, will want to pay us back.

Clear my confusion if you can. What do you truly think? In your honest opinion and thoughts, how do you feel about Obama not releasing the photos? Do you think Osama bin Laden is really dead?
For more of Deb's articles, please visit: www.debrapasquella.com
Barack Obama Debra Pasquella Is Osama bin Laden dead Osama bin Laden Saddam Hussein terrorism