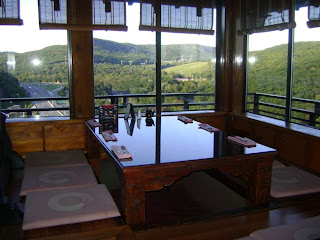 At the age of fourteen, my family had taken me to this Japanese steak house up in Hillburn, NY called, Mt. Fuji for my confirmation. The place is just amazing. It sits on top of this huge mountain. As you drive up, you spiral around the mountain to get to this magnificent place. The views are as beautiful as you can imagine. They have big hibachi tables where a chef cooks in the middle, private booth tables where you take off your shoes and scoot yourself in as well as regular tables. They also have this huge sushi bar that’s to die for. I remember my oldest sister Dawn was a huge fan of sushi. She kept begging me to try it because she knew I’d love it. I ordered it as an appetizer, a couple of pieces of tuna and salmon on top of rice wrapped with seaweed. At first, I hated the texture. I couldn’t get past the concept of it being raw. I took a few more bites, and that was it for me - I didn’t want to experience this stuff anymore. But, it was the same sister who made me experience it again in my twenties while we both worked for the same medical company. Their lunches were extravagant and well yes, expensive. She wanted me to come along and try it again. I did and what a surprise. I absolutely loved it. I want to even say, I started to begin my sushi addiction. The sushi spree occurred once a week. 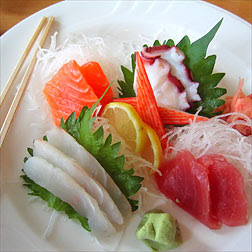 When I first started dating Madelene, I knew she only liked foods that were cooked - and I mean totally overcooked. Most Puerto Ricans like their food well done to almost charred. While there’s nothing wrong with that because I like some of my food that way, I really wanted her to try and experience sushi. At first, she would order the same thing: hibachi steak or chicken or shrimp or whatever, along with rice. I would extend my chopsticks her way with a tiny piece of salmon on it. She chewed it while her eyebrows furrowed and her face told me this was not her cup of tea. The next time, I decided to give her a spicy tuna roll. I told her it was cooked. (Ok, I lied.) She loved it. Then I gave her a tiny piece of yellow tail, with some scallions dipped in a little soy sauce along with a small dab of wasabi. She wanted more. I never gave up on her. Now, she’s addicted to it - and most of all - addicted to sashimi. (Raw fish without the rice.) We usually go to this local place down the street from us. It’s small, it’s not fancy, but the food is so amazing. We’re such regulars that all of the sushi chefs know us by name.

After years of going there, we fell into a “bad moment”... 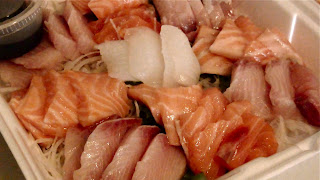 (Enlarge the photo above to get a closer view. The fish was literally soaking wet for some reason.)
You have to keep in mind that when you order sushi, it’s a definitely a delicacy for many people. There are warnings right on the menu that informs you that the food is not cooked and there may be bacteria present that can be harmful. The best days to go are Fridays, Saturdays and Sundays. Those are the big 'out nights' for most people. Also, being that my dad worked in the fish business for many years at the South Street Seaport, the big shipment for most restaurants was on Thursday evening. Remember that. Friday’s best to get your raw fish. With that being said, I didn’t think that Sunday night would be a bad idea to grab some sushi. In fact, this place is so good, I even go on a Tuesday on rare occasions. I can tell the fish isn’t at its “prime”, but it’s still good and I have never gotten sick from this place. However, last night was a bit different. We ordered sushi takeout, (sashimi and a few rolls) brought it home and when I opened the containers, the fish looked extremely wet. It looked like someone stored it in water. It was literally dripping. I smelled it and it was fine. The avocado roll we ordered was brown - not lime green as it usually is. This stuff must have been sitting for quite a while. So I posted the photo above onto facebook as well as my Twitter account, and received interesting comment that told me something I never knew before.

“...I wonder if it was still a little frozen while they were cutting it and it thawed in transit? Most places use the flash-frozen fish. I would call to let them know. They might have a new sushi chef who doesn’t know what they’re doing.”

I had other interesting comments that advised me to discreetly tell the chefs since I knew them. I’ll do it next time I go, so that they know I’m giving them another chance. Hopefully they'll be careful the next time around. I only ate half of what I usually eat, because it was “okay”, but too slimy. I had a little bout of queasiness, but luckily I was fine. I was really disappointed, because this is the one place we love to go to that’s so close to home and super casual. It’s nice just to stop in, have a few drinks and enjoy some great food, even if the view is lacking. I’ve gone to places where I have gotten severely sick and never went back a second time. But I will say this... Most people who love sushi and have had the unpleasant experience of getting sick will always get right back in the saddle. If you’re new to the world of sushi: know the risks and always go to reputable places.
And my sushi addiction goes on and on...

For more of Deb's articles, please visit: www.debrapasquella.com
at May 23, 2011