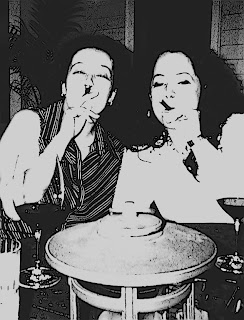 Years ago, smoking wasn’t a big deal as it is today. People smoked in their offices, classrooms, malls and dare I say it --restaurant and bars. It’s not like they didn’t know the risks of smoking, it was probably more due to the fact that more reformed smokers were emerging from every corner. I remember walking into a bar with my little pack of Marlboro Lights and smoking at least a half of pack while being there. Anytime I drank I ended up smoking more. I started smoking at the age of twelve. My friend and I had joined a few other people and we walked up into the Appalachian trails, sat on top of a mountain, made a campfire and lit up a few unfiltered Paul Malls. Our friend’s father was with us, and as odd as that sounds, he wasn’t exactly a role model. We were actually grateful for that. My mom came to pick me up at my friend’s house which was probably no more than a mile away and immediately, she smelled the smoke on me. I insisted it was because of the campfire, but she knew...she was a smoker herself. I must have reeked badly in order for my mom to notice, being that she's a smoker too. 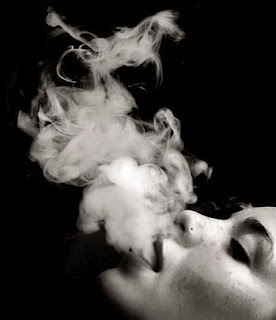 Growing up, my dad was a chain smoker. He still is. He used to smoke four packs of non-filtered Camels a day. He was a tough guy, but a ‘good fella’. “Smoke is like oil to an engine- it keeps me runnin’ kid!” he would say to me in between wheezy belly laughs. My father’s second hand smoke was like smog on a hot and humid day while he sat in the living room watching his programs. You could literally duck under it. I remember my sister Cathy and I would hunch over and scoot over to the couch next to the TV. Having dinner with the family meant dad will light up after his meal at the table, regardless if anyone was still eating. We didn’t take offense to it - it was what we’ve always known. I used to watch my mom smoke her Larks, the end lighting up as it fizzled down and then she would breathe the smoke out from her nose so gracefully. She never blew the smoke out of her mouth --ever. I loved watching her smoke. She made it look enticing. Her smoke wasn’t awful smelling like my dad’s. It was actually a pleasant scent. Both my dad and mom would have company over at night, eating drinking and having demitasse coffee while smoking cigarette after cigarette. The entire house smelled of smoke, coffee, strong colognes and perfumes. I never minded it. It somehow comforted me, because I saw how much it comforted them. 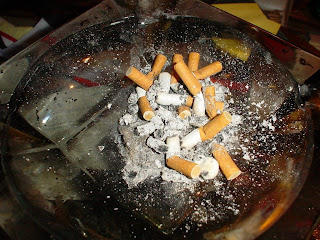 (The photo on the left is the ash tray in my dad's bedroom.) During my teen years, I started lighting up in my bedroom, while playing my guitar for hours at a time. Nothing soothed me more. I’d be lying on my waterbed, floating away with an ashtray on my chest, smoking my cigarettes, listening to music and overanalyzing everything. Smoking calmed me down, even though it’s a stimulant. I never understood that. My mom would come in and yell at me, “I don’t want you burning the house down!” I’d just look at her and ask, “How many burn holes are in your blanket? Now look at mine?” She’d storm out and say, “I’m gonna tell ya fatha’ and that’ll be it.” The pot calling the kettle black. Meh. I kept smoking until she really stormed in screaming at me. Soon enough, her “storm ins” weren’t effective enough so she made a deal with me: to not tell my father that I smoked. It was weird how much she threatened me with “telling my fatha” but she knew how hypocritical it was for her to forbid me to stop.

It was mid-February 1988, and we were all sitting around this enormous table at a restaurant in Brooklyn, NY for my cousin Elise’s bridal shower. Everyone seemed to be smoking and drinking and I sat there pretending to be this “innocent” little 14 year old girl. Then I heard, “Oh come on Deb, just light up. We all know.” My aunt was always a firecracker and then she let out this laughter that sounded borderline demonic. She then turned to my mother and said, “Oh come on Ro, you mean to tell me you already know but won’t let her smoke with us?” Mom just stared at me and said, “Go ‘head if you want”, hoping I wouldn’t dare light up. I reached inside my purse because I was totally jonesing. I looked back up and noticed my grandmother was staring at me giving me the ol’ “Italian eye”. Talk about making me feel uncomfortable, yet I had to go through with it. I smoked one and never took another cigarette out after that stare. She didn’t even have to say one word. I couldn’t even inhale without her sucking the life force out of me with this black magick voo-doo crap she was pulling.

Years later, when Madelene and I were settled into our first apartment, I noticed her coughing anytime I smoked. I hated to see that. She then made me smoke outside anytime I wanted a cigarette - and I did. I then cut down to only smoking on weekends while I had a drink at the bar. Finally, I stopped altogether and it was the best thing I have ever done for myself. The sad thing is: I now walk into my parents’ house and can barely stay for more than thirty minutes or so because the entire house reeks of smoke - even if they haven’t been in there for hours. I start getting a wheeze, and if I’m in there long enough, I usually get a smoke-induced asthma attack. When I lived with them before moving out with Madelene, I had to use inhalers and nebulizers, thinking that I had just developed asthma on my own, but when I moved out, I never needed the inhaler again. I’m literally allergic to smoke now. My mother denies it and says to me, “You grew up with this all your life and you used to smoke, how can you now be allergic?” She doesn’t understand that the reason why I don’t visit often, or if I do, for very short periods of time is because of the mass amount of smoke in that house. I’m there all the time in the summer because we can at least sit outside. 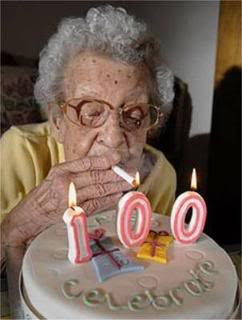 I wish my parents would stop smoking, but I can see how it comforts them. They drink coffee together, light up their cigarettes and enjoy their time together. How can you take something away from them that has comforted them for all these years, especially at their age? My dad has developed emphysema and my mom has the most productive cough in the world - enough that it sounds like pneumonia at times. I worry about them, but they seemed to be set in their ways. I'm certain that they'll see their 100th birthdays because they never seem to worry about health problems and thankfully, don't have major issues. I hate badgering them to stop, but for me, it's now more about spending time with them without hacking up a lung or two. I just can't sit in there for long. I also don't want them thinking that I don't enjoy their company, so it really makes me sad.  I didn’t quit when they told me to, so I don’t expect the same. I still love them anyway, even though they’re a pain in my “butt”.
cigarettes Debra Pasquella smoking