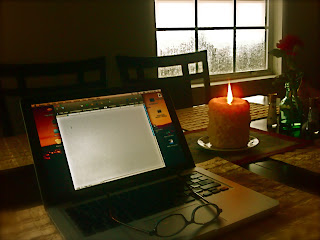 There was a howl to the wind yesterday morning, almost like screaming a message while tears of raindrops stream down my windows. I heard sirens going off every ten minutes or so, indicating that perhaps a tree had fallen down or an accident happened somewhere. I thought at some point during the day, the electric will finally let up and I would be left with a candle, a battery powered laptop with no internet connection and the sounds of mother nature giving me her wrath. On top of everything else, while I was working, the rain had somehow managed to make its way in from the skylights, dripping slowly onto the side of the leather sofa. I had to place a huge pot underneath, which gave me a tempo of rhythm that somehow was driving me to the brink of insanity. “Plink, plink, plink, plinkity-plink, plink, plink.” The classical background music didn’t help much at this point. It just made it more “dramatic” if anything. 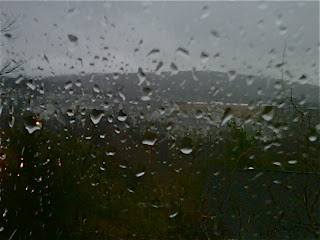 I had planned on doing a promo video for a local gallery nearby, but with the rain seeping into my living quarters and then hearing on the other side of the condo, there may have been another possible leak into the attic, I had to call the big guys to come in and check it out and cancel my appointment with the gallery. I thought living on the bottom units had it bad, but didn’t realize that problems could arise on the top bunkers. I usually enjoy a nice stormy day, but this time, it was hindering everything I had planned. At the end of the day when all the guys left the building, I quickly grabbed Madelene when she got home and brought her out to the local bar & grill nearby. I needed a drink and my anxiety levels were horrendous. All I wanted to do was grab a drink and a bite to eat - just Mad and me - no “socializing” - just peace and quiet at the bar. We knew it would be empty because everyone was sump pumpin’ their way out of misery.

We sat down in the middle of the bar and ordered a drink and some soup. Before even attempting to warm up with my soup, I hear, “Well whaddya’ know - it’’s Deb!” My spoon drops and I noticed it was an old family friend from years ago - I mean YEARS ago. To make a long story short, he basically told me his entire life starting from the last time I had seen him, which was sixteen years ago. That’s a whole lotta’ tawkin’. I even heard about everyone else’s lives, including people we mutually had known. I admit, it was so nice to see him, but there should be some sort of social limit when two people are eating dinner at the bar. I guess I’m contradicting what I have said in the past, that if you’re at the bar, don’t expect people not to talk to you. That I understand, but this guy was now wedged in between Madelene and myself, talking so closely, that the only air that I breathed in was his bad case of halitosis. It was so bad, that I had to turn my head at times and make myself cough to get more oxygen. My soup got cold and the bartender asked, “Deb, do you want me to reheat this for you”, as she looked at the guy and looked back at me to give me her condolences. “Naw, I’m good,” I said, shaking my head like there was no way I’m getting out of this vice grip.

Faux pas #1: When going to a restaurant - never, and I mean never stay more than one minute if you’re going to say “hi” to old friends sitting at a table. You can run over and say hello----but no stories or anything that would keep their fork in midair for more than ten seconds at least.

Faux pas #2 When going up to the bar - do not wedge yourself between the two people you are speaking to. You have every right to chat it up if you are still sitting in your seat. It’s a bar for the love of God, no one wants to turn away from it. If my back is turned from the bar, I’m going to be one miserable barfly.

Needless to say, I didn’t get to eat dinner, nor finish my glass of wine. It stayed half full. I guess that’s a positive statement, because I could have said "half empty". I came home, had two bites of a pizza and watched TV. It was so NOT what I had planned, but maybe drowning my miserable day into a glass of wine would have caused me great aches the next morning. I guess it could have been worse.  All in all, it was nice to see an old friend again. Next time, hopefully it'll be in moderation like my alcohol intake last night.
*************************************************
My friend Heather just started blogging. She's a computer tech guru, opinionated like me & lots of fun to read!  Please stop by and say hello?  Check her out---click here!
Debra Pasquella glass half full rain social skills storms