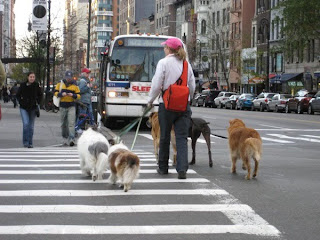 Have you ever come home from being in the city all day and it’s either, “Oh wow I love city”, or “Oh...muy...GAWD - I will never go back there again?” I’m having one of those moments this morning. Sunday must be some sort of half off sale at every goddam store on the corner because traffic was just a bitch. Instead of using all the good ol' subways, I thought I’d be smart and take my own car in. “Smart” involved hitting every fricken pothole the size of moon craters because of the previous storm, making my little caboose fly onto the other side of the road and Madelene screaming, “That’s gonna fug up your rims!” ...Really? As if I planned to target every single one of them. We got to our destination, met up with the great Chantal Carrere for the interview of the documentary and finally started having a much more pleasant time. After the interview, we had to head to the show to meet up with our friend Amy Beckerman.
Mad and I hadn’t eaten all day long. We totally forgot, and for me not to miss a meal was like seeing the Virgin Mary herself. The words, “I forgot to eat” have never, ever slipped out of these lips of mine. I suggested to Chantal that I would meet them back into the club after we got something quick to eat, and of course a stiff drink. Mad and I ended up at some weird, funky Mexican/Spanish restaurant with really bad merengue blasting in a speaker next to the table we were sitting at. They only had beer or wine so I got a Corona. The menu was four pages long of every kind of Cuban/Dominican and Mexican dish you can ever hope for. On the back, they had Cubana sanwiches & good ol’ American hamburgers. Since I’m such a badass gringa, I ordered a cheeseburger & fries. Mad orders the Cubana sandwich. The waitress comes over and informs me that they don’t have ‘that’ left. We start ordering other things, “No, sorry” was the answer to every order. “OK...what DO you have?” She looks at me, “You like rice & beans?” I really should have taken a photo of this menu because it was bigger than the bible. 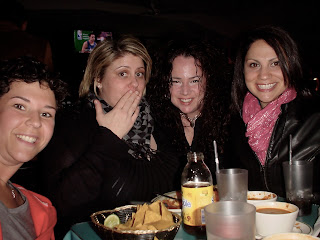 The show gets canceled, I get about 1,872.873.598 texts from the girls saying there weren’t enough people to make this gig happen. They all pile into our small corner of Cuba with us to have a bite to eat and just chill out before we all head back home. Chantal starts feeling MSG pangs coming on, as Amy sits there not touching her food because she’s having an anxiety attack about going on The Howard Stern show topless the next morning to promote a breast cancer benefit that’s taking place this March 14th at Comix Comedy Club in NYC. We had Dana LoVecchio with us, who was the only straight comic surrounded by hungry lesbians. She must have been frightened. She looked much like timid mouse cornered in by ten hungry alley cats. Poor thing. The wait staff had much to be desired, and Chantal was waiving her down as if she was hailing for a cab. It was ridiculous. 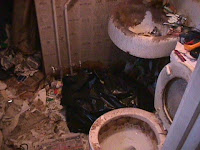 I finally had to make my way to the dreaded NYC bathroom. I call it the “NYC bathroom” because every single loo is the same: dirty, smells like men’s urine, a sink the size of a soup bowl and a huge puddle to place your feet in while you sit on the porcelain goddess. Luckily, I keep hand sanitizer with me at all times because you don’t even wanna touch the sinks --they’re slimy with unidentified discolored crap all over it. Even the soap dispensers are all grimy and looked like they’ve been sitting there for 100 years. I do the good ol’ kick the flusher routine and pray to God that the bottom of my pants never meet my hands---ever. As soon as I get home, those pants are literally taken off, and thrown strategically into the washing machine. 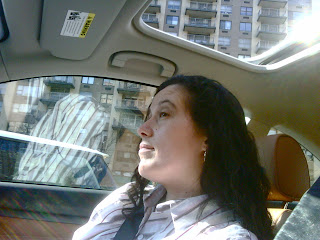 The ride home was a “trip”. I mean that by every way too. Since Madelene and I are a couple of barbaric tosspots, we had to grab directions off of other people’s phones because we don’t have a goddam GPS. What BMW driver doesn’t have a GPS? Better yet - what person in their right mind that lives in the 21rst century doesn’t have one? So we get our directions from each of the girl’s off each source of website they had listed and headed homebound. As soon as we get out of the Lincoln tunnel, we basically found ourselves in the middle of the Bronx. Our next stop: Connecticut. Now I was panicking and Madelene was getting nervous, because a panicky Deb means an unsettled evening. We push our “SOS” button in the car which brings us to BMW assist. Some guy gets on and we asked him if he could guide us out of Crack Alley. Mad said I was having a “medical condition”, while I drove and she navigated. After over two hours, we’re driving into our town, thinking we’re free and clear of any ‘bad luck’ to strike again, and a deer comes shooting out of the side of the road, aiming at my car. I swerved so strategically like a professional stuntman, Madelene had a mini heart attack and when I pulled into my parking lot, I screamed out, “I will never go back there again!” 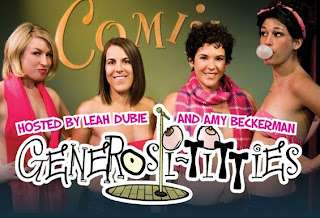 This March 14th, meet me at Genersoi-Titties - a topless comedy event to benefit The Young Survival Coalition. It starts at 7pm, tickets are $20 if bought in advanced and $25 at the door.

What is GENEROSI-TITTIES?
It’s full-frontal philanthropy: A topless comedy show to benefit the Young Survival Coalition.   Presented by Comix, produced by Leah Dubie (Tru TV, LOGO) and Amy Beckerman (HBO, MTV) and headlined by internationally renowned comedian Elvira Kurt (The Tonight Show with Jay Leno, Montreal’s Just for Laughs Comedy Festival), GENEROSI-TITTIES will donate 100 percent of the proceeds to The Young Survival Coalition (YSC). YSC is an international organization dedicated to the critical issues unique to young women with breast cancer.
In addition to a performance by acclaimed headliner, Elvira Kurt, the event will be hosted by Dubie and Beckerman and boasts some of the best local talent that NYC has to offer including Scout Durwood (Shot at Love with Tila Tequila), Jenny Rubin (WE), Amy Albert (Now That You’ve Seen Me Naked) and Selena Coppock (FOX).   GENEROSI-TITTIES: an evening of topless goodness with comedians who are partially clothed but completely giving.   For more information please visit www.generosititties.org ...
Amy Beckerman Chantal Carrere comedy Debra Pasquella GENEROSI-TITTIES