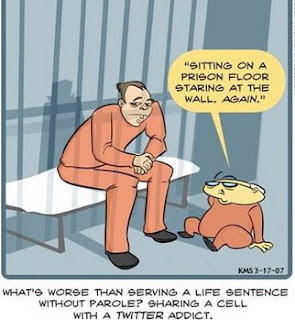 Granted there are many people who don’t think Facebook or Twitter are very useful, while others feel it’s their biggest source of promotion due to whatever business they’re in. My question is: is too much promotion for your business on either social networking sites a good idea? Even though I use it for both: promotional business marketing (for others and for myself) as well as socially interacting with my personal friends and family, there is one rule that people should take into consideration: do not mass email everyone in your Facebook account about an event. Send an invite through Facebook instead. If it’s a small party for just a few people---fine. I’m speaking of people who are promoting their shows, broadcastings and other things through personal emails, but in bulk. If you want to promote, put it on your page and it’ll send right into your feed for people to view at their leisure. Simple.

These days, Facebook has become more “looked down upon” if you’re one of those ‘status update frequently’ kinda peeps. See, I enjoy other people’s status messages, especially when they update frequently. Here’s the thing though: many people assume that those who update their statuses frequently are either bored or unemployed. I beg to differ. Most status messages that come from me are through my phone. I speak for many people. Just because you have a few postings per day on Facebook does not mean you’re home doing them. Facebook has become all about pseudo rules and regulations. I even tamed it down somewhat on my site, hearing my friends make fun of others and all of their status updates. I think it’s entertaining---why not? The people who usually complain about status updates are the ones who have no creativity to write a witty comment on their own. So they bitch, moan and complain about this that and the other thing. Block their updates. Simple.

Twitter. I think this social networking is one of the best and most informative sites around. To boot, it’s limited to 140 characters (as Facebook should follow into their footsteps), but you’re able to leave shortened links to informative websites or even have a photo album stored at your leisure. It’s simple, non-complicated to those who find Facebook a tad annoying and you get to interact with your friends, co-workers and even those you don’t even know. My first news source is usually found on Twitter. The first time I found out about Michael Jackson’s death was on Twitter, and then it flooded up and I couldn’t get in again because 1,987,876,572,926,026,362,721 people were on at the same time. I love when someone blurts out, “Twitter’s stupid.” I begin to wonder if they have ever sat down to even evaluate it to it’s fullest extent on their own before even making that assumption. I heard one girl say, “I can’t follow their conversations because I have to go to each account.” It’s not about following people’s conversations: it’s all about getting information at your fingertips at any given time. You can send your favorite twits right straight into your phone!

I do have some twits that I have favorited that are just funny. These people will tweet once a day and I will have a huge laugh over whatever it is they said. If you can make me laugh, think, or give me on the spot news----I’m hooked. This is what Twitter does for me. There are instances where some people will want to “protect their tweets” because they want it to be kept private. By doing this, your tweets will only be seen by those who follow you. Other than the rest of the cyber world, they’ll just have to ask for a confirmation to get into your account. For me, I don’t care who reads my tweets or even if I put up a message that “I’m here doing this now”. I’m not worried. I rarely tell people exactly where I am because that’s just stupidity. I did notice a few people who utilize a program where it tells you the location of the street your on in what town. That. is. stupid. I’m sorry, but you’re bound to get some whacked out stalker showing up at the cafe you decided to list where you’re at.

So my advice is, use Twitter safely, update your status messages whenever you’d like because if anyone’s like me, I get heaps of entertainment from it. I love when people can be themselves and write whatever’s on their mind or something funny to make everyone laugh with. Don’t fret about what others think of you---do your thang and let it shine!
Debra Pasquella facebook social networking sites Twitter