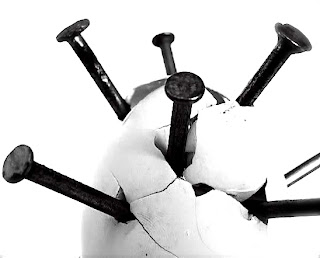 Have you ever gotten so caught up with bitching and moaning about how people act or why they do the things they do? Have you ever found yourself wondering why someone lives a certain way or lifestyle that is “seemingly” destructive or, something you’d never dream of doing? There are so many ingredients to a person’s makeup - so many different details that were added into their lives that make them who they are today. Ingredients may include: traumatic childhood past, alcoholism, abuse, religion, persuaded political views, home environment, education or a lack thereof, financial statuses, various people in and out of their lives, unfortunate gene pool/mental illness, self-esteem whether high or low and a bundle of other factors that may affect the way a person “chooses” to live, or for some people, how the cards were dealt. Their character make up is a product of what they were taught when they were young. Everyone is so different from another. Has anyone ever judged you for the way you live? People judge all the time, whether they do it openly or silently. It’s one of our greatest human flaws.

In my beliefs, God puts all of us in this world for a reason. We can’t all be the same. There’s a bigger plan; a bigger scope to God’s masterpiece. We only see a tiny piece of the project day by day. I was watching the news the other day listening to someone complain about the looters in Chile after the earthquake. Is it that hard to even fathom how desperate these people are? I know for myself, I would totally loot if I had to for my family to survive. I mean, if you’re going to complain about people going into supermarkets and stealing food ---then donate it to them. They need clothes, sneakers, and things that’ll last through the crisis that’s going on. It makes me sad to think that people can even use the word “looting”, when there’s a tragedy that had just taken place and prolonging because of the extensive damage from a n 8.8 earthquake ---one of the largest recorded earthquakes in a very long time. I remember when Katrina hit and everyone was questioning why these “bad people” were looting Wal-Mart. Hello? Do you not see what’s happening? Put yourself into their shoes. Your family is on the side of the road either sick, injured, starving and close to death: what would you do? Let’s even bring it down to a less extreme type of situation. Our economy is still taking its toll but, it’s getting better, yes. The other day, we had guy try to rob a local jewelry store. Let’s face it, there are some people who rob for the thrill of it, and there are other people who are so desperate to survive these days that it’s no wonder more & more places are getting burglarized unfortunately. Is it wrong? Yes, of course. But if you can step back for a moment, and step into the mind of a desperate person trying to support his or her family, it’s a much different scenario. Poverty = desperate measures.

Many people try to drink their problems away, while someone else that judges their lifestyle is overusing Vicodin to ease their back pain. One person rents an apartment while another person is living for their house--living beyond their means and in debt, judging the renter for not owning their place who is free from debt. One person judges another’s career choice, while being stuck at a 9-5 redundant job being miserable and unhappy with their own lives. We judge so much. When does it end? It’s funny, some people assume I’m poor, since I live an apartment, while other people assume I’m rich, since I have a bit more financial freedom, not being tied down to any debt. I don’t know which assumption pisses me off more, but the people who assume that I’m rich either hint for money or try to take advantage of me in some indirect way and the people who assume that I’m poor and feel they know what’s best in terms of financial advice for me. Then I wonder: why can’t friends mind their own financial business? Why are they always tinkering or hinting or taunting or just being downright plain obvious about their hidden agendas? Of course, then I start judging them. I’m human. I start to wonder about their poor social skills or lack of common sense. I remember a sitcom where they focused in on the faux pas of asking the dreaded questions of: “Do you rent or own?” I can’t remember which show it was, either Seinfeld or Friends, but it dealt with all of their neighbors living in one building asking one another if they rented or owned their apartment. Back to ‘real life’----can friends be friends without the knowledge of their financial status? This is one of the major reasons I do not mix friends and money. I wrote about it on this post if you'd like to read it. But, whenever friends and money mix--the friendship is over. You may not realize it at first, but if you lend or give money to a friend, the friend will either feel “owned” or feel the need to take advantage of you again, leaving you with a bad taste in your mouth. Maybe it’s all because of my bad experiences in my own past, but it always happens the same. exact. way.

I couldn’t give a rat’s ass how much money my friends made - I am friends with them because I like them, not because I like the bottom line on their bank statements. Could it be just character flaws or difference in opinions? Maybe I’m a bit opinionated for my own good, but I guess I have had a past where friends crossed the line. Some friends have even judged my marriage with my wife, not knowing a single detail of our relationship. What I question is how these people were brought up. Why are people so hung up on other people’s business? Then I start thinking: am I being way too judgmental and hard on my friends with my way of thinking? Should I become more like them and ask for money, or judge their lives or even perhaps, tell them their marriage is loveless? I think all of these things people sometimes do, are all part of the cocktail of being brought up - the ingredients to a person’s make up. My mother always taught me, that when you go to someone else’s house for dinner, you either bring wine or dessert, or something thoughtful to contribute. She taught me to say “please” and “thank you” after each kind gesture or gift. She taught me to never butt into someone else’s financial business or “make suggestions” about their life. Maybe I should blame my mother for my strong opinions about those who don’t do what she has always taught me. Or, maybe my mother has all the ingredients of a person who knows when not to cross the line. I ought to give her a call and say thank you.

I guess what I’m trying to say here is that we’re all judges in our own little ways. By me stating other people’s “character flaws”, maybe I should work a bit harder on my own. Maybe all of my bitching and moaning about this, that and the other thing only says one thing: we’re all imperfect.
criticism Debra Pasquella friendships judgmental people