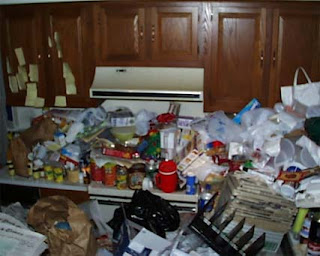 Lately, I’ve been fascinated with the TV show, “Hoarders: Buried Alive”, where they show people who store ‘stuff’ in their houses until it practically hits the ceiling. It’s not just ‘stuff’ either, it’s old food left out and tons of garbage that hadn’t been taken out in like over a year or so. They claim they have some emotional attachment to these ‘things’ or ‘stuff’ or ‘crap’, but I say it’s a load of shit...literally. What makes a person want to live in a pile of rubbish? You can’t even walk through the room without climbing and struggling around their “emotional attachments”. I don’t mean to poke fun at their mental illness, which is what psychiatrists are calling it --but for someone like me, who has a huge OCD problem (as far as cleaning goes), I can’t understand it. If I see one tiny little strand of cloth from a blanket or other on my carpet, I freak out. It. must. go.

My mom kept a super clean house. She cleaned that monster every single day of her life. She’s still neat, but my father on the other hand, is not. He’s more of a clutter bug. He has this dining room-like table inside his bedroom so he can have coffee, do his paperwork and have it be his office/bedroom. But now, it has slowly become a pharmaceutical nightmare. There are literally fifty different prescriptions from doctors all from different months, years and so on. There are more meds on that table that he doesn’t take, than what he currently uses. Would we call this an “emotional attachment”? I don’t know. He has another “office” that is set inside one of the living rooms. We used to have Thanksgiving dinner there. The room is still nice, however one side of the dining room table is loaded, (and I mean loaded) with rolodexes, cartons of cigarettes, car batteries, tons of different hats, hunting knives, fishing knives, whatever strikes the mood knives and bowl of fresh fruit. Don’t ask. He also has a sub-table on the side which was once a nightstand. That includes: papers from business deals from years ago, a few hats, part of a generator, tools for his machines outside and tons of pens as well as lighters. I’m about to hold an intervention with “Hoarders”, but unfortunately, he’s too “clean” to qualify.

For a while, I had two cleaners that came in every Thursday afternoon and totally shined up the place. When dad stopped working, he didn’t like the fact he had to be shuffled into his bedroom while they cleaned. They usually took about 3-4 hours at a time, depending. So, needless to say, we had to stop using them to make dad more comfy in his house. I asked mom the other day if she wanted me to hire them back and just do a good starter clean, because she’s been complaining about the clutter. “No, yer fatha’ doesn’t want any of his stuff touched,” she’d say to me, but I know she desperately wants them back. I then reassured her that they wouldn’t touch his area, at least they could get the nicotine stained walls looking a bit like real wood and have her house sparkling in no time. Anytime she has company over she says, “I’m ashamed of the house.” She’s too scared to tinker with dad’s clutter. So lately, I’ve been thinking, maybe it is an emotional attachment to these ‘things’ he has all over. Maybe the fact that he’s not working as much, leaves him holding onto to these old ‘work papers’ to make him feel like he still has something of sorts. By throwing them away, does it mean that he has simply given up? Probably so, but in reality, he’d be making a new start.

I know for a fact that if I was not with Madelene, she would be a complete pack rat. Although she is super clean as far disinfecting everything, she has a huge problem letting go of ‘items’ that she has an emotional attachment to. After a year, if you don’t use something: throw. it. out. We have a room that’s an office/workout room with a bit of clutter. Some are hers and some are mine. Anything from framed artwork, clothes to be dry cleaned, a few boxes from our appliances in case something goes wrong we can send it back in it, clothes that we ordered that didn’t fit well that needs to be sent back and a bag of old photos. We just don’t have a whole lot of storage in our place. Other than that, our place can appear a little too “stiff” at times because my OCD has everything alined up ‘just so’ and glistening in case an uninvited guest arrives. Maybe my extreme cleanliness is an emotional issue, just as hoarding is seen as one too. And yes, rest assured all door knobs are wiped down vigorously. I’ve even contemplated bringing in the big guns and hiring my cleaners to do a THOROUGH cleaning on top of my own. In fact, when I used them in the past, I’d clean up first, and let them focus on the deep down heavy duty whatever needs to be cleaned. It’s like mowing your lawn before the landscapers arrive. I know. I need help. Maybe I’m the one that needs the intervention?
clutter Debra Pasquella Hoarders OCD pack rats