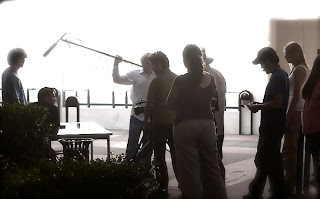 Sometimes things in life throw me for a loop. I’m learning a lot as I’m now experiencing the world of filmmaking. There is so much involved aside from filming and editing. For my documentary, I’m seeking gays and lesbians of whatever faith, to come and talk about their experiences with adversity and talk about their childhood growing up, which includes stories about ‘coming out’ to the family. In fact, stories about their families are very important in this film. With participants that I am familiar with or who are in my network, I’m not strict with them about signing release forms and contracts. It’s a nonprofit film with contributions from those who want their voices heard, to which I’m grateful for. I never ran into a problem until recently. I totally understand that everyone wants to look their absolute best on film, but sometimes you just have throw your arms up and chuck it up to either bad lighting, bad location or just simply, bad outfit. I don’t know. But to my surprise, to which I thought was a very good segment, and this “person” looked better than any other film she has out there --she was displeased unfortunately. I tried reassuring her that she looked great in it, but as a woman myself, I know that sometimes I’ll bicker about a photo tagged to me or if I think I look too fat in a video. I was promised a decent location where I could at least be more than five inches away from her, however we got stuck in a studio apartment that barely fit my tripod inside, leaving us with close up that was too close for comfort.

Here’s my beef: this documentary is about gays and lesbians who love God and who know that God loves them ---whatever “GOD” they pray to. I want to show the world that just because we are gays and lesbians does not mean that we have no faith in God. We’re all not pagans and satanists. I do agree, that the church has left a sour taste in our mouths and most of us do not attend Sunday service, however we have God ‘right here’, whenever we want to call on Him ---but it’s great when we do break through the barriers of fear to walk into that church full of people who are sinners just like ourselves. What gets me is, if you are talking about faith and religion, while justifying your lifestyle as a homosexual ---every word out of your mouth should not be “fecking this” and “fecking that”. It was tricky to edit, but I did it to the best of my ability. I understand that all of us curse: I do, she does, he does and we all sometimes say something to make it a bit more ‘colorful’ ---but this was downright awkward.

Second beef: if you are going to be a participant for my film, I am now going to have a release form stating that whatever you say while the camera is rolling is owned by me. See, my one participant had much to say on film, in fact, I was delighted she shared so much about her life, but she was horrified to learn the things she had said while reviewing it all. I spent over twelve hours editing this one segment, plus putting a preview onto Youtube, so that people can be updated on new segments, to only pull it down due to conflict of interests. All that work for nothing. Well, I can at least call it a learning experience and never film anyone without a release form. I wanted to trust those who I knew and those who seemingly were already out there in the public eye. I didn’t expect this at all. But, I do understand it - however, the participant wanted me to edit out all of the material that was so needed to make her segment qualifiable. To add onto this, I sent her the questions for the interview almost a week prior to filming. She had time to say: “Hrmm, do you think you can change this up a bit?” I send out questions beforehand so that interviewees have a chance to tweak it or tell me that they don’t wish to answer a particular question. I think that’s pretty fair.

I’m hoping that the next participants who are willing to contribute to my film will be okay with this new release and contract, especially those who are my personal friends that’ll take part in this. If it was only going to be on Youtube, it wouldn’t be a problem because whatever you film on your camera is “yours”, however for a documentary for whatever reason, it is a bit more tricky.
I wouldn't call my previous experience a total waste of time, but more of a learning experience.

I am still looking for more participants, so if you are interested, please email me at deb@debrapasquella.com ... Currently, I’m seeking more gay males of faith at this time. I will be in NYC in April and also filming in upstate NY as well.
Debra Pasquella documentary filmmaking gays and lesbians LGBT