Will It Come Down to a Racial Holy War? 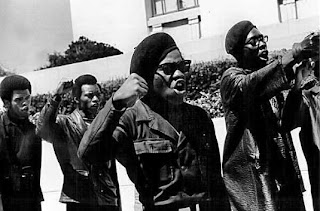 There are many deep seeded prejudices that are embedded in a lot of people. If you were either brought up in a household where one or both of your parents or guardians had any prejudices, then you were most likely planted that very same seed of hatred or discontent for people who were different from you – whether they were black, white, homosexual, etc. The election aftermath had people muddling around in a melee of blogs, articles, conversations around water coolers and even newspapers claiming reasons why this was the most mentally exhausting election of all time.
In one article I had read, they started out by Barack Obama’s religion. They posed it as a question and asked if he would make it known that he’s a Muslim after he is elected, even if he did claim he was Christian this whole time. Do people care? Some. Mostly Christians will care about this. Another question on the list was, “Will Black Panthers patrol voting booths, like some claim they did Election Day?”

Ok. Here’s the thing: when I go to vote, I have to drive to where I’m registered, which is in my parents' neighborhood. They have a place nearby where they hold their voting polls. It’s predominately a white community. As I stood on the line waiting to vote, I saw all the regular ladies around the neighborhood signing people in and others coming in with baked goods, giving treats out for free just because people have voted. At the booths, I noticed there were black women standing there to hold the curtains open for us. I didn’t notice this until it was my time to go in. The woman smiled and tiled her head, almost as if she already knew I was going to vote for Obama. (Then again, maybe this was all in my head.) Imagine if she really knew who I was voting for? This somehow planted guilt in me. I know it wasn’t her fault that I had guilt, but I had to wonder: why are they placing black women at every voting booth? I have never seen this before and it wasn’t like there were any other white people there to do the same job. In other places like Philly, they had black men in Black Panther attire smacking blackjacks in their hands standing guard at the locations intimidating people, saying, “We are tired of white supremacy.”

Take a peek at this next video, where members of the Black Panthers were there to intimidate people to vote for Obama.

Maybe what happened to me wasn’t Black Panther-related, but in other places I’m concerned that many people were turned away from their own locations to vote somewhere else…or turned away from voting all together.
Difference is: my experience wasn't "intimidating" more than it was guilt stricken. These men that are in the video above were clearly intimidating.