In the Gray Area 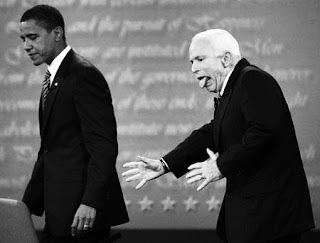 With Election Day approaching and my mind spinning between political debates and distasteful commercials that each candidate sets forth upon one another, I’m more confused than ever. I thought by now that I would come to a clearer decision of who I would be voting for, but unfortunately it just gets worse and worse and just more confusing. Some say choose the lesser of the evils and others tell me their passionate opinion regarding ‘their guy’.
I’ve been researching, reading and finding things on Youtube (politically and not sifting through personal videos by civilians), and found something that almost made my decision lean more toward one candidate. It may seem idiotic that my vote could have been swayed one way due to the answer Obama gave to Pastor Rick Warren, on the question: “What was your biggest moral failure?”

“I had a difficult youth. My father wasn’t in the house,” the presumptive Democratic nominee answered. “There were times where I experimented with drugs. I drank, you know, in my teenage years. What I traced this to is a certain selfish necessary on my part. I was so obsessed with me…It's not about me.” Obama said, coincidentally paraphrasing the first line of Warren's best-selling "The Purpose-Driven Life." ---read more.

At first, I didn’t realize that Obama was quoting something from Pastor Rick Warren. I have read his book and it didn’t even dawn on me. I was really touched by Obama’s honesty and his ability to reach down to those who can relate and familiarize themselves with a candidate and not just see them as some far fetched political figure who would look down on people due to their past and “moral failures”. I was happy with his answer and even more pleased about the way he had humbled himself in front of millions.

McCain spoke about his failed marriage. Okay, a failed marriage is something to be disappointed about, but is it a moral failure on John McCain’s part? Maybe his first wife was unfaithful? Maybe she was the one who ended the marriage---I’m not sure, but I do know that this “moral failure” that McCain had spoken about dealt with two people. We’re talking about “McCain” and not anyone else. What is “his” moral failure? Hard question for anyone to answer publicly without looking bad. It’s like the inevitable job interview question: “What is something that you need to improve on or see as flaw?” We’re taught in many advice books and websites on how to give the best interview and to answer that question with, “I’m a perfectionist and I’m too hard on myself.”

After the interview between Obama and McCain with Pastor Rick Warren, I was leaning toward Obama, until I found out Obama was trying to ‘pal it up’ by quoting some line in Warren’s book.

Of course he did. I know that I’m basing my decision on frivolous interviews, but I’m trying to see their true character and not something that has been rehearsed in front of their mirrors hours before.

I’m not sure if I’m ready for that big of a “change”. I like both of these candidates, yet at the same time I dislike them. I’m confused because every politician lies and there are no guarantees that either one will serve our country better. We can only go on promises made by them and annoying campaign ads that drive us all nuts and has us “snoping” every single claim a each one makes.

I am totally in the middle and need a push in the right direction. If you can explain to me why it is better to vote for a particular candidate due to whatever---anything you feel that is important, maybe my decision will be clearer for tomorrow, otherwise I am not going to be at the polls.