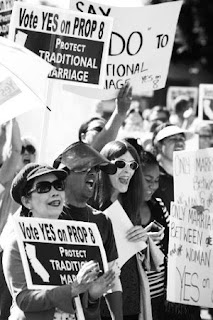 If you live the ‘straight life’ and feel as though your vote for California’s Proposition 8 was due to your values, beliefs and what you stand by in your own personal life—then fine. But if you’re a person who seeks to have sexual relationships with the same gender for yourself just for ‘fun’, and yet you’re out there voting for Prop 8—then you’re a hypocrite in my opinion.

Remember the woman I was telling you about in my previous post, who voted for Obama for no other reason other than the color of his skin?

In her own words:
“THIS IS A STRAIGHT MIRACLE. A BLACK PRESIDENT???? We couldn't even walk on the sidewalk only the whites could for a long time, drink out the same water fountain, use the same bathroom. America had us acting like we were contaminated with a disease. Who can hold back tears???? Jesse Jackson watched his boy MLK get shot in front of his eyes, he even ran for President and even all the blacks told him IT WASN'T POSSIBLE. Well not ALL but the VAST MAJORITY. For him to see a moment like that.........remembering all Martin Luther King Jr did to get us to this point?????????? HOW CAN YOU NOT CRY?”

She never mentioned one reason why she voted for Obama due to his intelligence or experience. I personally feel the behavior of the people who were at the Obama rally was similar to the behavior of those who followed Hitler. They cried too. They were so passionate about him that nothing else really mattered. Yes, first black man to be president-----great! But, let’s be honest here – it was a bit insane. 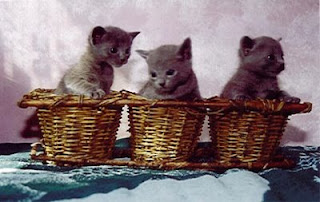 On another note, she states that she believes the sanctity of marriage should be between one man and one woman. Fine, but what if you’re playing Miss Bisexual of the year? She has invited Madelene and myself into her bedroom for a little ‘fun’, assuming that because we are a lesbian couple that it must mean we’re promiscuous. An offer of a little ménage à trois... I graciously declined and she lashed out at me because she was rejected.

Some people shouldn’t even be allowed to vote in my opinion. "Miss Bisexual" doesn’t care if Obama is intelligent, experienced or what his policies are---she only cares that he’s African-American. (And yes, he has some other nationalities mixed up in there too.) But the point is: a black man is running for president. Who cares about his qualifications?

Who cares if she’s voting for Prop 8 and seeking out lesbian affairs on the side? It kind of sounds like those Republicans caught with their pants down.

Knowing the struggles that she and her family have endured regarding rights, you would expect she would have compassion knowing the struggles that the LGBT community goes through. Now she is seeking to take away rights from those who love one another; from those who want to start a family and live their lives the way they want to. She wants to take away the rights of gays and lesbians to love, marry and have children. She wants to choose who you should love and who is allowed to get married.
She wants to control what happens in your bedroom.

She also chooses to dabble in it too.
Hypocrite!

Edit: A fellow blogger, Kevin quoted this after hearing I was all for McCain:

"Hi Deb,
Obama may be against gay marriage (at least that is what he says--we'll see what happens if he gets elected), but he openly stated that he was against Prop. 8. McCain, on the other hand, openly supported Prop. 8. Prop. 8 states that it will eliminate the right of gays and lesbians to get married. I don't see how a person running for president can support taking away a right of anyone. But it is done and soon we will know the outcome of this election and the outcome of Prop. 8. Now I am nervously sitting here wondering if I am going to be married tomorrow."