Do You Have That "Gut" Feeling? 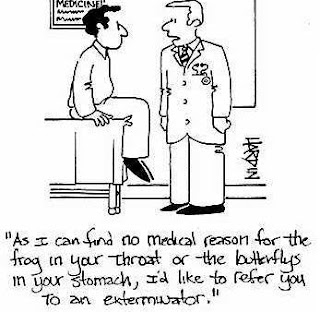 The other day, I was reading what a fellow blogger, Ricardo was going through. He explained that he’s experiencing a lot of stress in his life, mainly work-related, and his doctor had diagnosed him with GERD, (gastro esophageal reflux disease). I know about this all too well because back in the beginning of 2006 up until the beginning of 2008, I was so stressed out, where my stomach starting giving me signs that enough was enough. From heartburn, indigestion, chest pains and severe stomach cramping, I ended up finding out I had GERD.

My doctor first prescribed me Aciphex for the reflux. This medication is a potent form of the over-the-counter drug, Zantac. Although it did help, once I stopped the medication, my reflux and stomach problems quickly came back. Not too long afterwards, I started having pain so badly that I was taken to the doctor in an emergency. Once they knew it was an ulcer, they gave me a medication that would coat the ulcer and almost “cement it" so that no stomach acid could penetrate it. I wasn’t allowed to take any ibuprofen or anti-inflammatory drugs. I was given a list of things I could and couldn’t eat, as well being told to stay away as much as I can from any unnecessary stressors that were in my life.

Although most medication that the doctors gave me helped temporarily, they were also depleting my calcium and other nutrients, which made my bones weaker and left me tired at times. I thought I really couldn’t do anything about it since I didn’t want my stomach worsen, but I did seek alternative options that were better for me, in my own personal opinion, which I would like to share with any of you who are suffering from the same thing.
1. Brioschi. This stuff was introduced to me by my sister. It’s 100% natural and it’s similar to alka seltzer. It has a high content of sodium, so if your doctor has told you to stay away from salt, then you it's best you seek other options. It’s a miracle worker though, without the harmful chemicals to deplete you of your vitamins.

2. When reflux strikes you unexpectedly, pour a glass of water and swallow 10 times really fast without stopping. What this does is wash down the acid so that it doesn’t irritate or burn your esophagus. This has always helped me.

3. Eat an apple a day! Apples are great for your digestion as well as neutralizing the acids that run rampant in your tummy.

4. Try not to overeat. The “fullness” gives the GERD an easier climb up into your esophagus, making you miserable the rest of the day. Usually people who suffer from GERD digest a whole lot slower, so it’s important to eat in small intervals so that you won’t overstuff yourself.

5. Vitamin E – 400 IU worked for me tremendously. This vitamin helps limit the nitrates, which your body produces from eating certain foods. It greatly helps the blood flow and limits the ultimate scary “C” word---cancer. Carcinogens formed in the stomach from nitrates are what causes cancer and other illnesses. With healthy blood flow and the help of vitamin E, you can greatly reduce your risks of a bigger concern.

6. Eat your PB&J! Peanut butter is like a cement wall in your stomach where the acids have a hard time trying to penetrate your stomach lining. This helped me a lot when I was younger with my first ulcer. Now, unfortunately, I am allergic to peanut butter---but this was a miracle worker too!

7. Ginger root. Most likely when you were younger, you were given ginger ale to make your tummy feel better. It’s not an old wives’ tale. Ginger is great for digestion and relieves stomach pain. It also provides better blood flow, like vitamin E does which is so beneficial to healing.

9. Steer clear of broccoli! Although broccoli has been known to kill the bacteria which causes cancer in some, it also can give you a lot of pain if eaten raw---almost as if you’ve eaten razor blades for lunch. It’s healthy, but painful.

10. Breathe in………breathe out. Meditation and finding peace in your life is the biggest help of all. Once I got rid of the stressors that were plaguing me emotionally as well as physically, I was able to live my life more comfortably and calmly. Sometimes that means getting rid of toxic people and other times, it means you really need a life altering change for the better. This could be finding a new job, eliminating negative friends in your life or just doing what makes you happy. I found Reiki to be a source of relief to most of my ailments. You may find a simple 45 minute massage will do the trick. Exercise is a wonderful outlet too!
There are so many people who suffer with this and those who don't even know they have it. If you have any of these signs, it's best to seek medical advice and get the treatments your doctor prescribes. On another note, be careful about these medications that the doctors freely give out, because they can be as bad as pushing drugs for emotional disorders---(pill pushing). They get kickbacks and rarely go by what "you" need. If anything, please try these natural remedies that I have listed above and make sure you find yourself at peace and away from toxic people, places and things!
aciphex Brioschi Debra Pasquella GERD Reiki stomach ulcers stress zantac