Can I Say That? 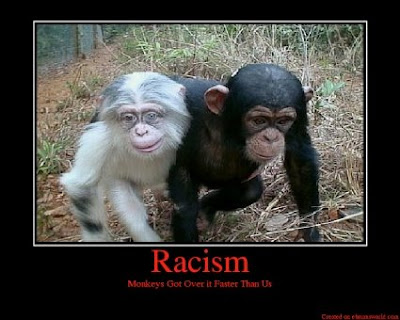 Race has been a huge factor for Obama’s campaign for many who have voted for him and those who have not. Not all. Most. No doubt- this was an extraordinary historical event. America made history! There were enough tears to fill up Lake Placid from the joy and relief that African-Americans felt when they heard that it was the first black president in history. Jesse Jackson was so overwhelmed; he stood there with tears streaming down his face and his lips quivering---totally in shock and thanking the good Lord above for this glorious night in history.
Was it because he is a qualified candidate who holds a lot of experience and will better our economy? Or was it because it was the first African-American president in history? Why were they crying?

I read somewhere that even if you call Obama “eloquent”, that it’s a racist remark. Do we have to tiptoe through the bigot detectors in order to talk about our new leader? Here’s my problem, or not: it’s always a good thing to learn about your roots and ancestral history, but to bring up your children by planting the seed of resentment for people who have died long ago is absolutely disturbing. We’re with you! We agree that what the white man did years ago was wrong and awful. African-Americans are so angry at us----still to this day.

I had this friend who was black. --(Can I say that?) And the entire time spent with this woman was absolutely grueling only because she kept bringing up “the rich white man” and how they never give black people a chance in life. With this type of mindset, we have affirmative action where most companies like to span out and split in their employees in half by race, just because they don’t want to appear as racists. We are tired of tiptoeing around! Why can’t we just see that we’re all one? Why can’t we just get rid of the past and realize that we can make it so much better here for us in the United States, as well as all around the globe by forgiving and…”forgetting”?

I have received hate mail by people who were disgusted by my choice, McCain. I didn’t vote for him because I’m a racist- I voted for him because I hold more like-minded views with him. I feel safe with him that he would take every measure to protect us in a time of crisis---whether by terrorists or by our current financial crisis. I was in the middle though, because I did like a lot of Obama’s ideas. I was confused right up to the last minute. But to say I am being a racist (you know who you are), just because I have voted for McCain, is distasteful and shows me how much people are going to keep holding grudges towards white people. I’ll leave it at that.

Check out this video on an interview with Howard Stern as he interviews WHY the people of Harlem are voting for Obama.