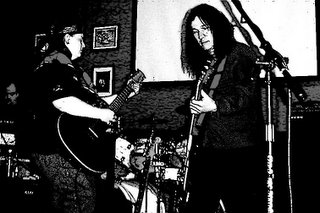 Saturday evening, my girlfriend and I went to go see our good friend Alyssa play with her new band. She was formerly a member of Replica. Alyssa is a talented musician, plays guitar and has a voice that is comparable to Janice Joplin, Melissa Etheridge and Joss Stone.

We walked into the place, and to my surprise, they were all set up and ready to go—two hours 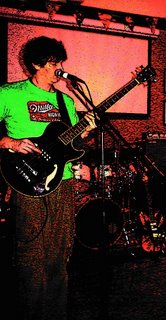 before they were supposed to play. She has three other talented men playing with her. There’s a keyboardist, a lead guitarist, a bass guitarist and drummer, plus Alyssa playing acoustic and electric---which she switches, to suit any particular song. The band also interacts with the audience, making them even more entertaining. They had people getting up to dance, and had the whole bar practically mesmerized by their performance. Usually, when I go out to see a band, everyone is doing their own thing, and not paying attention to the stage. This was quite different. I'm very proud of Alyssa who came a long way to get where she is. It's great to see her happy again--and doing what she absolutely loves. 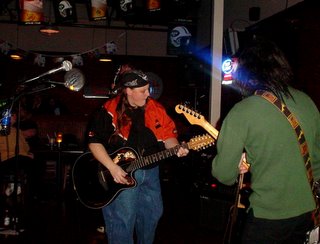 Let me tell you---these people should not be doing bar gigs; they should be out touring. I was so impressed with their music, and variety, as well as how ‘put together’ they sound. I’ve been out to see many bands, and a lot of them sound messy, and not put together well. September Dogs were in sync with one another, and on top of that, you can see that they had such a good connection. It was evident to me, that not only did they have a professional partnership in music, but they have a friendship as well. That’s important when you work with others in any type of field. 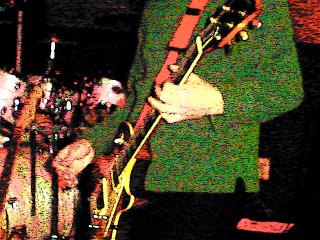 Another wonderful aspect of this newly formed band, is that you can actually hear yourself talk

while they play. They weren't overbearing, and the sound was perfect. The bar that they played at, is very challenging to work with, due to the acoustics. The ceilings are as high as a gymnasium's; so whenever a band plays there, they usually get muffled out by echoes of their own music. The September Dogs pulled it off--extremely well.

Before Alyssa & her band started to play, she hands me a very expensive SLR digital camera, so I could take some pictures of her while she plays. Now, I’m ‘old school’ when it comes to cameras, and I still use film at times. I brought my ‘tourist looking’ digital camera for quick shots so I can post them. My girlfriend had a disposable camera. It definitely can’t compare to Alyssa’s high tech toys.

As I fumbled around this beautiful camera that Alyssa threw on my lap, it looked like a fricken cockpit full of buttons I had no clue about. Major concern—how do I turn this puppy on? I called Alyssa’s girlfriend over to help me.

“Sue! I need your help! I can’t figure this thing out?”
“Uh, Deb, aren’t you a photographer?
“Heh. Start with me---go ahead!” I said, laughing at how stupid I felt.
“Hmm…How do you turn this on?” Sue said, as she pressed buttons randomly.

Finally, Sue gets it started up, and started taking pictures. I, on the other hand, resumed by picture taking with ol’faithful---the tourist camera. Sad, huh? I didn’t get such great shots, but in the future, I will be able to take better photos once I get my good camera. 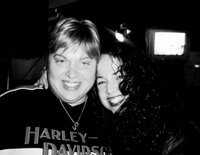 It was Sue’s birthday as well. She turned twenty-nine years old! Okay okay, I missed eleven years. It was her 40th birthday, and we were all there to celebrate it. They had a cake, and we all sang Happy Birthday. Sue doesn’t look a day older than thirty, as she sits there and complains about her age.

Saturday evening was definitely a special event for Alyssa, as well as for Sue.

Good luck with your new band, Alyssa---and Happy Birthday Sue! Madelene and I are taking you both out to your restaurant of choice to celebrate.