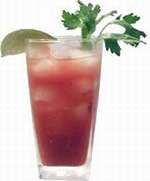 “Deb, let’s go see your sister today.”
“Okay, I’ll be there in fifteen minutes.”
“We’re only going to her house; you don’t have to dress up.”
“Ma, I’m in my pajamas working. Let me go get dressed.”

I quickly scrambled into the bathroom to take one of those ~quick--get the hell outa’ here~ showers. I dried off, threw on an old sweat shirt and a pair of jeans with a huge scarf. It was cold outside! I smeared a glob of foundation on my face, so it didn’t appear as though I just woke up from the dead. I also had to draw my eyebrows in. Yes, you read that correctly. I am one of those ‘over pluckers’, where I have to fill in the blanks. If I leave my house without drawing some sort of line where my eyebrow used to be, I will be without expression. Or look like a white version of Whoopi Goldberg. Seriously.

When my mother and I got to my sister’s new house that she and her boyfriend just purchased, we got to see the grand tour. It was beautiful, very large, but warm—not cold looking at all. They still haven’t moved into it yet, they were just there to look around. My sister and her boyfriend are real estate brokers, so they had the key to the lockbox to get into the place.

The people who now live there, are moving back to India. The furniture was so odd. These couches looked like leather cushions with half a back and no arm rests. How could you relax on these? I guess you didn’t. Much of the art work was Indian influenced of course, and a most of it was somewhat over the top and downright tacky.

What surprised me was, the people who still reside there didn’t quite pick up after themselves. Now, if it were my house being shown to other potential buyers, I would make sure it was cleaner than a hospital. Although, after being at a few hospitals myself, I want to backtrack that statement.

“Oh this is the bathroom that goes into the son’s room.” My sister says, as she guides us through a bathroom to get into another bedroom.

No lie---this kid left his underwear lying on the floor near the toilet. I swear I saw skid marks, but didn’t want to sit there and access it. His room was painted pure bright red. His ceiling fan was black lacquer. Holy mother of Allah---this room smells like a mix of Polo cologne and body odor! It was definitely some weird science-like bachelor pad. I wonder if he brings 72 virgins in this room. After seeing the skid marks, I highly doubt it.

We finally come to the kitchen of the house- which is absolutely stunning, and start talking near the island. No, not a real island--a bar-like counter in the kitchen. We realized we were all hungry, so my sister blurts out, “Bloody marys, Deb?”
I was so for it. I needed a drink, and what better people to enjoy a cocktail with. We headed off to our favorite place for bloody marys and a nice lunch.

Having lunch with my mother, sister & her boyfriend is always a fun event. They all know that I have two wooden legs, and that 2, 3, or even 4 drinks, isn’t going to tickle my toes. I’m still sober. Two drinks with them, and their personalities change--umm—sometimes good, and sometimes bad. Here’s what happened…

I grab her remains of what was now ice, and slid it to the end of the table to indicate,
“YOU’RE CUT OFF!”

Once you get into that, “I love you” talk, that’s it, you’re cut off in my book. If you tell me that stuff sober, I’ll make sure you don’t have a high fever, and rush you off to the nut hut. Reminds me of that Bud Light commercial where that guy keeps saying, “I love you man! I just love you man!” My best friend does this crap to me all the time. I’m wondering if she has a secret crush on me---she's straight too! Which reminds me, I have to go visit her tonight. Oy.

Okay—getting back to this weird conversation at the table.

“Remember that girl Debbie dated a long time ago, mom? The one I kicked out of the house?”
“You mean the one who brought the bag of toys over?” Mom says, so everyone could hear her.
“Ma! She didn’t bring a bag of toys! It was an overnight bag!” I corrected her, but wondering how she found out it was, in fact, a bag of toys. She called it, ‘her bag of tricks’. Lovely.
“Oh you know Debbie, that pretty blonde girl that you were dating used to come over with her bag of tricks.” Mom said again, very loudly.

Not only is this embarrassing to talk about with mom, but my sister’s boyfriend sat there, sipping his bloody mary, very slowly. His eyes darted at me, to see my reaction. What a weird predicament this was for him. I warned him about coming into my family. I always warn them.

I thought I was the one with the alcohol problem?