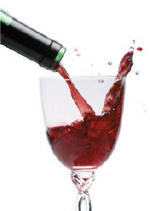 It never ceases to amaze me. Every single time I am with friends & family trying new drinks, everyone wants to take a sip out of my cup to see what I’m drinking. Why? Can’t you pour your own and just leave my cup alone? Especially in the midst of the flu season---lay the hell off my cup! It actually reminds me of that Bugs Bunny episode where he keeps telling the gorilla, “Stop breathing in my cup!”

Oh great, different wines from all over the world. Everyone gathers around the bar at my house to try these fantastic wines out. I pour a small dab of Chianti in my glass, I swirl it, and then take a sip. Hmm. It had a bite to it—probably needs to breathe a little longer.

I sat there staring at everyone who was taking a sip of a small puddle in the bottom of my wine glass. Madelene knows my dilemma. She sees it in my eyes. I nod—indicating, ‘it’s okay to get me another glass—but do it discreetly.’

Not for nothing, but I’m not fond of lipstick marks left on the rim of my glass and having to catch someone else’s cold. It’s just not for me. This is one of the major reasons I stick to beer. What are the chances someone’s going to walk up to you and say, “Hey, can I try that?” And believe me, it’s not that I’m repulsed by the people who ask me, it’s just my ‘OCD’. I promise you that.

Occasionally---oh hell---every week, Madelene and I will stop by our favorite bar and restaurant to have a drink and a bite to eat. Sometimes in the middle of the week, we’ll sit at the bar, and drink a few beers, and a few shots. Our favorite shot is Belvedere vodka. I order one from Paulie—the owner and bartender.

“Sure, you want that chilled?”
“No!” I said, knowing (as a bartender myself) it gets chilled with other things that have been mixed prior. You end up having this fruity taste to your shot. Either they don’t wash it out good enough, or you end up drinking the last bit of someone else’s apple martini.

“There ya go!” Paulie says, as he slides the two enormous shots to us. These shots were more like four in one.
“Be careful.” I said to Madelene, knowing that she is now drinking a very strong beer—no light stuff tonight, and on top of that---shots.
“I’m okay.”

We both said cheers and down went the Belvedere. Or did it? Wait. No. What’s this? This is not-----this is Smirnoff! I started to fume. I don’t want to sound like a snob, but I’m a connoisseur of good vodka. You cannot take a rail drink and pass it off as top shelf to me. I’ll know instantly. Os will even vouch for me here. I know that a lot of bars water down their vodkas. That is illegal to do. The one thing I feared the most, was Madelene getting sick on this stuff. Madelene is very weak when it comes to cheap vodka. She can handle the Belvedere, Ketel One or Grey Goose—but give her Smirnoff, and she is off to see the porcelain God.

“You know what Paulie? I’m gonna go with the Ketel One.”
“Sure, anything wrong with this vodka?”
“Yes, it’s Smirnoff. You might want to check who’s replacing it with the cheap stuff.”
“Smirnoff? Impossible.”
“Possible. Believe me.”

Paulie comes back over, and pours us two shots of Ketel One. We both down it.
“Hmm. Fruity, almost peach-like.”
“What is this?” Madelene asked. Now, if Madelene has to ask, you know that there’s a problem. She’s good with her vodkas as well, but her taste buds are a bit off due to her sinus problems.

“Paulie, listen, I’m a bartender too, but whoever is working when you’re not, is replacing this stuff with the cheap stuff. I would look into it if I were you—or you’re looking at someone ‘bigger’ than myself who will recognize the same problem. Believe me--it happened to a bar I used to work at. My boss would fill the bottles with half water and half vodka.”
“Uhh, okay…I’m sorry about this.” He said, as he put back the bottles full of cheap vodka back on the top shelf. It was evident someone made a huge mistake and put peach Stoli into the Ketel One.

Remember, if you order a martini—especially a dry martini straight up, and you think it tastes ‘off’—tell them. If you don’t, you might as well just brown bag some cheap vodka and sit on a park bench somewhere. That stuff will kill ya!

Bars market their liquor up to 300%. You pay $5 bucks for a good shot of the top shelf. Make a fuss if you don’t get what you want. It’s you who’s paying for it. I wonder how many times I was too drunk to even notice it.