It’s difficult when you have to deal with shallow-minded people who have absolutely no tolerance for anything unfamiliar. Again, it’s all about ‘the unknown territories’; the fear of opening up to a new world, or learning about someone else’s lifestyle. Why should they? They’re comfortable in their walls of seclusion—not desiring knowledge of other lifestyles and cultures. And that’s “okay”.

Then you have the people who cross those lines. Those very thin lines of respect can be easily confused as ‘innocent questioning’ or ‘remarks’. Most of the time, it’s not so innocent, due to their approach. 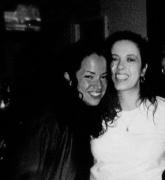 Madelene and I have been known to be the itinerant bar hoppers back in the day---okay, okay, we still are. We love talking to everyone and anyone. Most people I meet at the bar are men, and they’re just so interesting to talk to. We never get ‘weirded out' or feel awkward when men approach us, because if you’re sitting at a bar, you have to realize that it’s a social setting. If you’re not looking to converse with anyone, then get a table. That’s my theory behind that one.

I never forgot the time, Madelene and I were sitting at a bar having a drink talking, when someone taps me on the shoulder.

“Debbie?”
“Yes?” I turned around, and it was an old boyfriend I dated back in high school.
“Oh my God! Anthony! How are you?” I said, as I hugged him & introduced him to Madelene. Anthony was with his brother, and it was so nice to see them again. We talked about old times, and reminisced about the good ol’ days.

A few drinks later and a couple of shots down, the inevitable question lures in the air.
“So are you dating anyone?”
“Yeah, I am…and you?” Thinking that would settle the weird, ‘You’re a lesbian!!!’ shocker.
“No. Single…So, does this guy treat you good?”
“Yes…I’m happy.”
“So what does he do?”
“Sells cars.”
“Oh yeah? So how did you meet him?”

This was going back and forth like a bad tennis game, except the ball didn’t drop so quickly. I had to end this volley—now. Madelene just sat there entertained with the anticipation of my next answer. I think she was actually enjoying the torture I was being put under. I’m not quite ‘open’ willingly to certain people, because I know their point of views with certain lifestyles, and Anthony was an ‘old fashioned’ type of guy who wouldn’t be so open-minded. At this point, he was being intrusive asking way too many questions about ‘my boyfriend’.

He looked straight ahead, with this blank stare on his face. It almost looked as if he was going to cry. It wasn’t as if I was the love of his life or anything, we only dated a few weeks back in high school, so I didn’t think this was going to be such a heart breaking event here.

His silent censure had me concerned. It wasn’t a normal response. The loud silence became almost unnerving. He turned his back and began speaking to his brother.
“Well that’s just disgusting.” He said to his brother who was sitting at the end of the bar.
“How can do girls be together? That’s ungodly and an abomination in God’s eyes!” He said louder, knowing that I heard every word.
“What a shame, and such a pretty girl too, you know?” Now he was talking about me as if I wasn’t there at all.

“What’s a shame is that I dated you! That’s the shameful part of my life Anthony.” I said, as I picked up my jacket to head to the other side of the bar. There was nothing shameful about my scenario. Here I sat, with this beautiful woman—which was unavailable to all men. He sat there, with his brother, criticizing my life. It was actually sad to see his response.

On another note, let’s head back to ‘the family life’ at home. When my mother finally accepted my lifestyle, she always gave me these words of wisdom.

“Debbie, never, ever, ever, start looking like a ‘dyke’. Always look feminine and keep up with your appearance.”

Ah, the words of an accepting mother. It was the first step of her accepting me—of course with stipulations. I had to look like a girl if I wanted to play with the other lesbians. Lovely.

There have been plenty of times where I would speak to men or women, who would simply say, “Why? You can get any man you want!” I love that remark most of all. That one is actually flattering, because I know in fact; I can’t get any man I want. It sounds a bit pretentious; nevertheless, flattering.

“I wish I could get any woman I want! Now that would be a better scenario!” I always respond. Their eyes widen as I open them up to a new world.
“But you’re such a pretty girl, that’s a shame.” Then it goes back to that ‘shameful’ part. Is it a matter of them being ashamed of me? Or do they think that I’m embarrassed by my lifestyle? I don’t quite understand their statements.

Now the best ‘reaction’ that I love so dear, is the one where a man is interested in me, and then goes for that execrable suggestion.

“Well you haven’t found the right man.” With one eyebrow raised up high...(Ugh)

Oh—you have to love that one. I’ve found plenty of men that are beautiful, intelligent, funny and loving. To me, my preference goes beyond gender. It’s all about the person inside. Who’s to say years down the road if I were to be single again, that I wouldn’t date a man? It’s possible. Anything is possible. Right now, at the present time, my heart belongs to Madelene. She’s a woman, and she’s an incredible one. She is the ‘right’ woman for me.

Here’s another look at ignorant judgments. One of my best friends, who I grew up with, comes from a Jewish background. Jessica’s parents are very strict upon who she dates. Our families were very close for many years. Jessica is only allowed to date “Jewish men”. It’s a tradition. I’ve heard of this before, and that’s okay—as long as that person is happy with their choice. She informed me that she just got engaged too. I was so happy for her. We lost touch for almost a year, and when I met up with her again, she invited me over to her house. Her mother answered the door, and asked me to come in.

The first words out of her mother’s mouth were, “You know Jessie’s engaged, right?” I immediately looked into her eyes, and saw disapproval right away. I sensed it. The tension in her voice was alarming.

This started to confuse me. I didn’t understand why she was saying this. I never met Jessica’s fiancé, but she sounded so happy. I saw Jessica’s eyes when she told me she was engaged. I saw happiness.

“Well, you do know he’s black, right?”
“Oh. Well, he treats her good, right?”
“Well, yeah, but that’s not the point.” She said, as her eyes were impossible to make contact with.
“They’re both in love, right?”
“Yeah Deb, but that’s not the point.”
“Then what’s the point?”
“He’s black Deb. What if you came home telling your Italian father that you were engaged to a black man?”
“Mrs. G—I’m engaged to a woman. I think he has enough of his own battles to deal with.”

Once I said that, her eyes made immediate eye contact. She stared at me. Her eyes were almost glistening. In that very instance, she hugged me. She never really hugged me ‘sincerely’ before. It was always an ‘air kiss’ and a fake hug. This hug was one that said, “Thank you. Thank you...” I’ll never forget that. She realized that you didn’t have to get married to that perfect mate with the big house and the white picket fence. You marry “the person” you love.

I found the true meaning of what love is. If you have this--then nothing else matters. I found this in the first Corinthians...

Love is patient and kind. Love is not jealous or boastful or proud or rude. Love does not demand its own way. Love is not irritable, and it keeps no record of when it has been wronged. It is never glad about injustice but rejoices whenever the truth wins out. Love never gives up, never loses faith, is always hopeful, and endures through every circumstance. ~1 Corinthians 13:4-7