Bottom of the ninth, questions are loaded, Madelene tries to antagonize a Boston Red Sox fan at a local bar in Provincetown, MA last year in October 2004, as we all watched the World Series. Half Sox fans and half Yankee fans, it was a pot not to be stirred. Sitting at the bar having my dinner, I would secretly cheer (in my mind) when the Yankees would score. Madelene?....I’m surprised she didn’t bring her fricken pom poms. She cheered so loudly, as if she didn’t care that there were burly looking women who were Red Sox fans were surrounding the entire bar. I certainly cared.

“Oh how sweet, look’id’ dis, two little feminine New Yawkas’ ova here cheerin’ da Yankees on.” One girl said, sporting a very long “Joe Dirt” type of mullet.
“You know, they can’t beat the Yankees, it’s just a fact, they always win the World Series.” Mad replies, as if this girl couldn’t take her on.
“Oh wait- don’t choo worry—we’re winning dis one baby.”
“You know, I think Red Sox is a great team, I wouldn’t mind seeing them win this year for the World Series, it’s been quite a long time anyway.” I said, trying to defuse the situation that was brewing between Joe Dirt Dyke and my girlfriend.
“Awe, what do we have here? A Red Sox sympathiza’? Awe, that’s precious. Even more precious when a femme gets all up in da’game.” She says, as she rolls her eyes over to the big plasma T.V. in disgust.

Okay, now my blood was boiling. This was not supposed to be an argument for me to have. Hell, I sometimes can’t figure out if it’s a homerun or a touch down after three beers, so why even consider me a good candidate for this argument? After all, I’m “just a femme”. *grr*

Let me take you one year before that. October of 2003. Madelene and I are vacationing at Provincetown, MA, with a couple of other friends. We were at a club this time. They had the game on, as well as the music. Some people were gathered at the bar watching the game, while me and the rest of the crew were out dancing having a good time. I just can’t focus on the game if there is no sound. It baffles me how some people can do that. I’d rather listen to the game, without a picture. Not that I’m going to be walking around with an A.M. walkman anytime soon trying to get the latest scores.

“What the f*ck is your problem? You’re going to not serve us because the Yankees won?” I heard Madelene screaming.
I look over, to see Madelene’s butt in the air, leaning over the bar trying to yell at the bartender who was a little tiny feminine girl, with a big mouth. Madelene’s foot was propped on one of the stools, as she was leaning over the bar counter giving this girl a piece of her mind. This was so out of character for Madelene. I then realized the Yankees won, and Madelene was upset over the fact that anyone can even cheer on the Red Sox. It wasn’t a matter of the woman not serving her; Madelene was the one with the big mouth! She needed to be cut off...now!

It looks like this year, we will be in Provincetown again. Yankees won eight to four last night, defeating the Red Sox. The Yanks are now three games behind. Although I love the Yankee’s playing, I am kind of hoping they don’t go to the World Series, for the sake of Madelene not starting a bar room brawl. Then again, she would just cheer on the other team, just to piss the Red Sox fans off. No one knows this side of my sweet, loving girlfriend, but beware, do not cross her path with a Red Sox hat on. Last year, I went to buy a Red Sox hat, not only because red is my favorite color, but it would make me appear less threatening. People wouldn’t have to think, “Hmm, is she for ‘us’? Or is she the enemy?” For the love of God we’re in their state! I’m a coward! I can’t run around wearing a Yankee hat! They’ll attack!

Back to current times. Last night, Madelene and I come home from dinner so we can watch the game. I went into the kitchen to get us both a beer, and hear her clapping like a crazy lunatic that just got out of an insane asylum.

“They won! They did it! They won!” She screams and chants as she swings me around the room. Didn't realize she had the strength! See picture below. 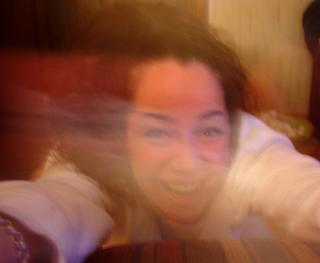 I’m thinking about booking my October trip in Manhattan, with my fellow Yankee friends. I can’t go through another baseball war between a mob of dykes and my girlfriend.

God help us all.