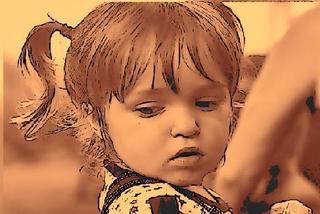 It was a beautiful August evening, sitting out on the patio with my family and playing with my cute little three year old niece, Sophia. We were all talking and having a good time. Sophia started to run around the patio table, over and over again. She was making me dizzy at this point.
~SpLAT~ ~^~^~^~~~

I hear the wails of cries coming from the other side of the table. Sophia had fallen on the patio, where the air conditioning water was leaking out. We all rushed up to see if she was okay. Mud all over the palms of her hands, her legs and her whole outfit, we had to take them off so she would be cleaner and put on something new. As I went to pick her up, to bring her inside-- ~^~RALF~^~!!!-----She threw up all over me. My entire outfit was covered in white milky chunks.

Again! She tossed her cookies up all over a second time around, making sure that my hair was also included. This must be love, because I was still holding her. I gently put her down so she can finish off the rest of the grass- to fertilize the flowers. The poor girl fell so hard that she scared herself sick. Literally.

Dawn (my sister) and I brought her up to my bathroom to take a nice bath. Yes. I had to wait for my clean up. I smelled like who did it and ran. We know who did it—and she was in my bathtub. Oh the laughs, the giggles and the happiness spewing out from the bubbles from beyond.
“Look mama! Rubba duckies!” As she points to the top of the window sill for her mother to get them for her.

Are you still wondering why I have rubber duckies in my bathroom when I am without child? Yeah, thanks for even going there…

Let me explain. Madelene and I go to Provincetown, MA every year, I as explained in previous posts. The theme of the resort that we stay in has rubber duckies with sailor hats. Madelene was in the Navy, so this was significant to her. The other rubber ducky was from a pirate museum in Provincetown--with a pirate's hat; which Madelene is obsessed with anything that has to do with shipwrecks, pirates, the Titanic, etc… So these rubber duckies are like little trinkets of her experience in Cape Cod. Sentimental value—if you will..

Sophia is full of bubbles, looking adorable, playing with the two rubber duckies in the tub and looking her jovial-self more than ever.
“Mama! Duckies come home with me! Duckies come home with me!” Sophia voice echoes out through the bathroom, into the hallway where Madelene was standing. The horror on Madelene’s face explained a lot. She did not want to part with her rubber duckies.


What? How old is Madelene. She’s forty-one. Oh- wait, I’m sorry, twenty-nine. I still want to keep my teeth.

Dawn dries Sophia off with an oversized towel, and looking absolutely adorable right now. There’s something about a little kid getting out of a bathtub with wet hair, all clean, and wrapped up in an oversized towel, it’s just so sweet! How can you say NO to this adorable little girl? You just can’t!

Wait—she still has the rubber duckies in her hand while walking out of the bathroom. Madelene’s face turns green.

I then proceed to shower up because, well, I’m just a complete mess. I stink of vomit and I need soap ASAP. This was a job for HASMAT.

I come downstairs after I shower up and join the rest of the family. The duckies are there. Madelene is there. Sophia is staring at Madelene. Hmm.
“Magic- I wanna bring duckies home.” Sophia calls Madelene ‘Magic’—close enough, right? The only thing Magic doesn’t do very well is disappear…ah well.
“Sophia, the duckies live with Magic, you can visit them when you come over.” Dawn reassures Sophia that she will see them again.
“I want the duckies mama!” Sophia now starts to kiss the duckies and hold them tightly.
“Oh she can have them Dawn!” Madelene says, as I can see her eyebrows up in the air (a sign of when she is either lying or doing something she doesn’t want to) I read her facial expressions very well.
I’m starting to feel worse bad for Madelene than Sophia at this point! This is a war against a three year old, and a forty-one year old…I mean twenty-nine!

“We’ll get you bigger and better ones next month when we go to Provincetown, Sophia.” I said to her, feeling all bad for ‘my big baby’. I have all intentions of buying her a huge stash of rubber duckies this week.

Sophia kisses the duckies goodbye, and she gives them back to Magic. Madelene promises to replenish her with bigger and better rubber duckies.

I didn’t know who to feel bad for more-- the little girl, or my big girl that lives with me! I guess sentimental value goes beyond any object, even if it is a cheap ol’ rubber ducky. The fact that these duckies were not mine, Sophia knew I had no choice. So the wrath of Sophia will continue on for Madelene. I’m glad I wasn’t the one in possession of these God forsaken ducks. 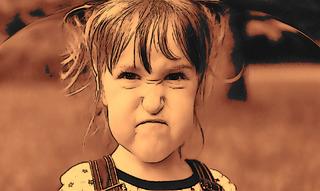 WARNING: Withholding any playful object or rubber ducky will result in serious consequences. Side effects include, massive amounts of screaming in ear, severe migrains, an overwhelming sense of guilt, two black eyes, unknown bite marks on your calves, and a grudge that will last a lifetime. Ask your doctor if witholding rubber duckies from a child is right for you.