The Minds Behind Conversion or Reparative Therapy 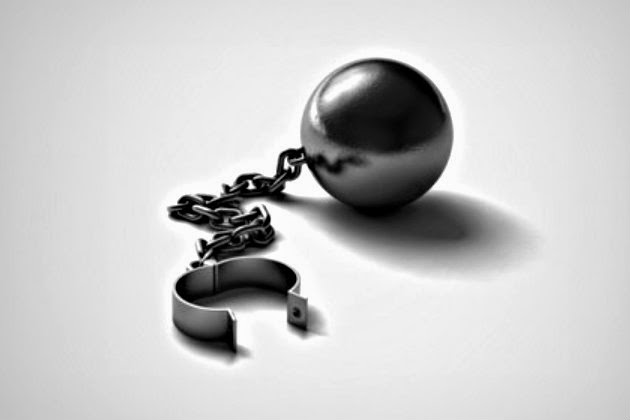 It's just amazing how this world works. You have religious bigots who think homosexuals and transgender people are going to hell, while committing another "biblical sin" of their own. Their own radical hypocritical views twist every single biblical scripture there is for their own agenda. Their agenda being: to change society to all heterosexual and "moral" people. They want everything and everyone uniform, in fear that the world they live in will be one filled with different people. Bigots hate change. They want "their own kind" only.  But then there's a whole other kind of bigotry going on in this world, and sadly, it's from our own gay and lesbian community. I have encountered more than a handful of lesbian women who have all stated that they would feel very uncomfortable, and would not welcome transgender women using the same restroom as they would. In fact, they also stated that they would feel "invaded" that a transgender woman would want to be part of their "community" -- as though a "man" was trying to pass for a "woman". I find it so disturbing on so many levels, because here they are as a lesbian community seeking out acceptance from society, all the while not giving acceptance of their own. It's downright hypocritical. No matter if they're a cisgender woman or a transgender woman the fact remains, they ARE all women.  Same should apply to cis/transgender men.

There's this huge wave of self-absorbness, self-righteousness as well as self-loathingness with those who reject anyone out of what they call, "the norm" -- i.e., a threatening sense of their reputation and even, their own sexuality and identity. There is a lot of truth in that we hate what we see in ourselves. We fear what we may become. We are threatened when we're faced with our own possible inner conflict. And of course, the concept of, we hate ourselves so much that we can't possibly show love to anyone --period. There's a psychological reason why some people are so incredibly proactive in bigotry. There is this Facebook page called, Support for Joshua Ryan Alcorn's Family. I don't believe the Alcorn family runs this page or has anything to do with this, but the people who run it were exposed as sex offenders. There was even a slightly distorted photo and profile of the sex offender named, John S. Bulla. This hate filled page is still up and running, so if you would, please trek over there and report it as abusive. We don't need this kind of hatred, especially when we have lost Leelah Alcorn from the torture of being bullied by her own family. It's one thing to be against something or to not believe it's "right", but when you force a child no less to "conversion therapy", it exceeds all sorts of boundaries. I can understand if a parent does not understand why their daughter or son wants to be another gender, but isn't bad enough -- torture enough to feel that way at such a young age? And then on top of it, be made to feel bad about who you are. It's disgusting really. But my point is, here you have these sex offenders on a "religious" page still referencing Leelah as "Josh" and disrespecting everything that Leelah stood up for, in the name of God. Meanwhile back at the ranch, someone's getting sexually molested because of these same creeps. It speaks volumes on how sad this society really is, especially the religious society. 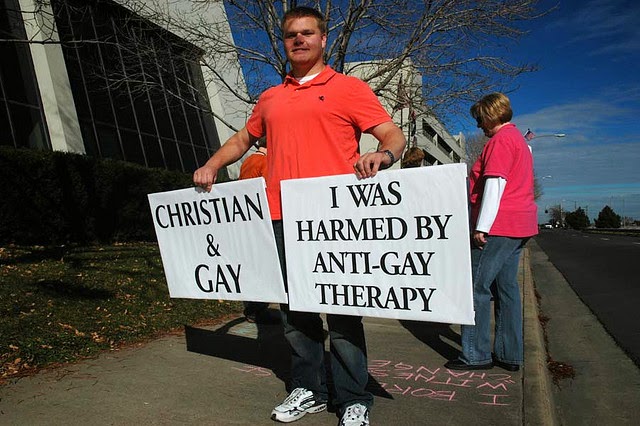 I've told this story once and in brief, I will tell it again. In a church that my wife and I were attending about 15 years ago, we were approached by an older lesbian couple in their sixties who had been together for over 25 years.  They instantly knew we were a couple, even though we walked in appearing as "friends" -- we didn't show public displays of affection, I guess it was just obvious though. They stated that there was a lesbian ministry. I was thrilled because they had an LGBT support group from what it sounded like. But that wasn't the case. It was a "pray your gay away" type of group -- where they would try and convert you to be heterosexual. When the couples each gave their testimonials separately on the stage, they sobbed, as if they lost the love of their lives. And they did. They were living a lie. They were living their life because other people felt that their lifestyle was "wrong" and "sinful". They even had a minister travel from a far distance to speak about the dangers of homosexuality for two whole hours. It was so sad to see them focus on this particular subject, that I had a few words with the head pastor of that church. It was at The Trinity Assembly of God in Middletown, NY. The couple (who said they were celibate now but just living together) had thrown a ton of scriptures "proving" that our lifestyle was wrong. Thank God I knew the bible, because I gave her many scriptures and rebuttals to prove her wrong. Her eyes widened as though she may have made the wrong decision. I'll never forget that look. She got quiet on me and then looked over at her partner. 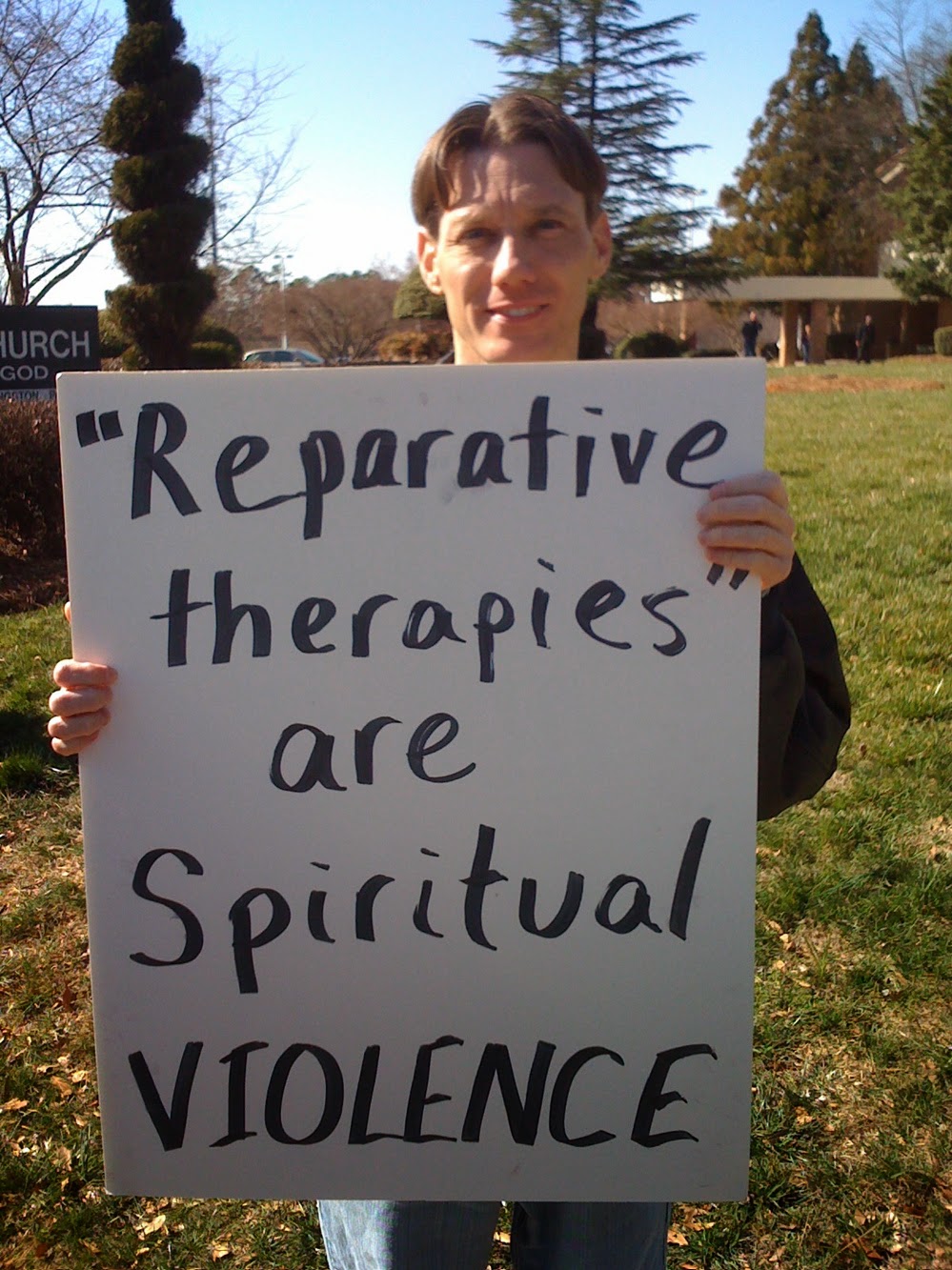 My point is: they were "converted" by false teaching. They were made to feel guilty for who they are. God does not give the feeling of guilt, fear or depression -- his counterpart does. They had started their celibate relationship for more than a decade, denying their true desires for one another. Somehow, they still remained together, living together, restraining all thoughts of physical intimacy due to what some religious holy roller had to say about it. They were completely brainwashed into this conversion group that they couldn't possibly go back to...their "sinful" ways again. But I could see that the thought of 'what if' was there once I showed them my interpretation and understanding of the bible scriptures. The look of confusion, indecisiveness, and even hope came across their faces as if they found a lost treasure. I left that church after my long meeting with the pastor who kept repeating himself with, "God loves the sinner, but not the sin," and still continued my own relationship with God -- the god that wasn't present in that building.

I'll leave you with this passage from the Bible...