Have you ever heard, "You're not alone," when you're going through problems or maybe just depressed? I just think -- wow, there must be a billion-gazillion-wazillion people roaming around the earth right now and there's not one person to go to for help, or to talk to, or maybe just to vent to. I mean, realistically, there is, but how realistic is it to call up one of your friends and say, "Ugh, I am having a hard time." Generally speaking, I just imagine the other person on the phone thinking, "Umm, yeah me too. Deal with it." So, I don't call people about my bullshit because people have enough of it of their own. Nobody's life is "easy" -- 'n I don't care if you think they do diddly squat all day -- it's not. Sometimes when you're in a larger family, especially full of women like myself, telling one person is the same as blasting it out on a megaphone in Times Square. I know a few friends who sometimes blast their sadness onto Facebook status' or tweets and I think, "You're not going to get genuine and sincere help -- you're going to get busybodies all up in your bidniz!" But, there are good people out there that will take you seriously and who will help you on social media. But what's it worth?

Just the other day, I was having a "I-don't-have-a-purpose-in-life" day. I was feeling a bit depressed and just crawled into my own little safe cocoon with the ringer off. I thought I loved what I did for a living, but it kinda made a lefthand turn into Albuquerque, where I thought, "I have no purpose. Why am I doing this?" I went through every sort of negative thought pattern that progressed and progressed: 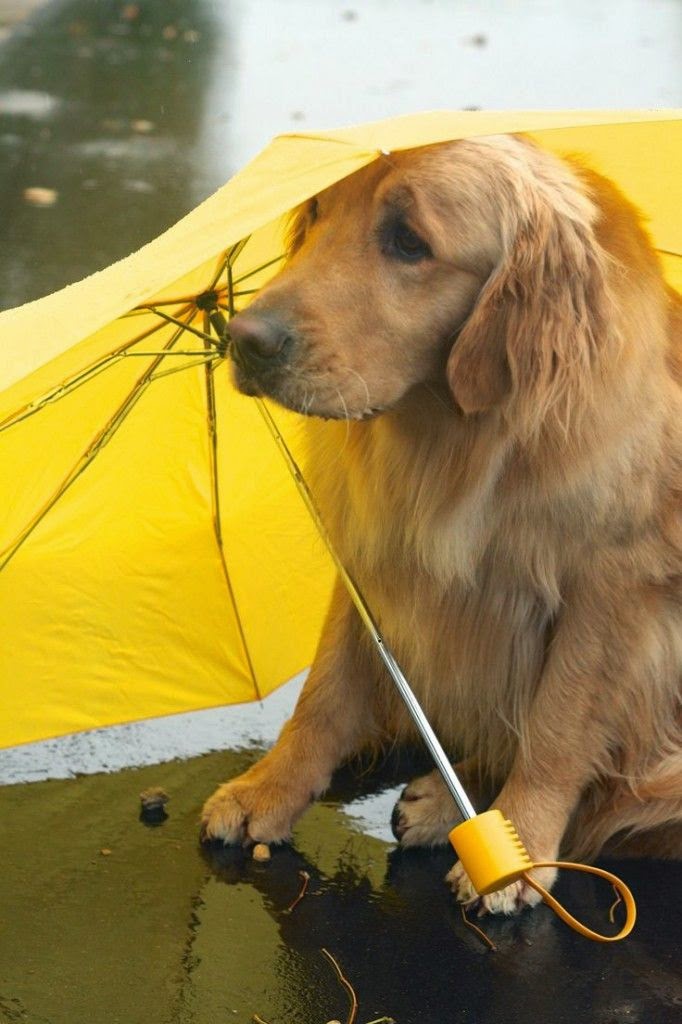 It was then I received a comment on my profile photo on Facebook from a friend named, JoAnne. She said, "Gorgeous lady with the biggest heart. Fabulous cook, stellar writer, advocate for gay rights...and there's plenty more. Thanks for sharing, Deb. You are our gift." I haven't heard something like that in a very long time. She basically took all of my negative thought patterns and put them in a beautiful perspective for me -- a perspective that I was blind to see. I still doubt many things on that list -- call it modesty or just call it self-loathing, I just have a hard time digesting compliments sometimes. And oddly enough, as I went through those negative feelings, her comment came just at the right time. It was just a few words that turned my negative thinking a little more positive. That's all it takes sometimes -- for you to hear your worth and what people see of you -- not what you see of yourself. 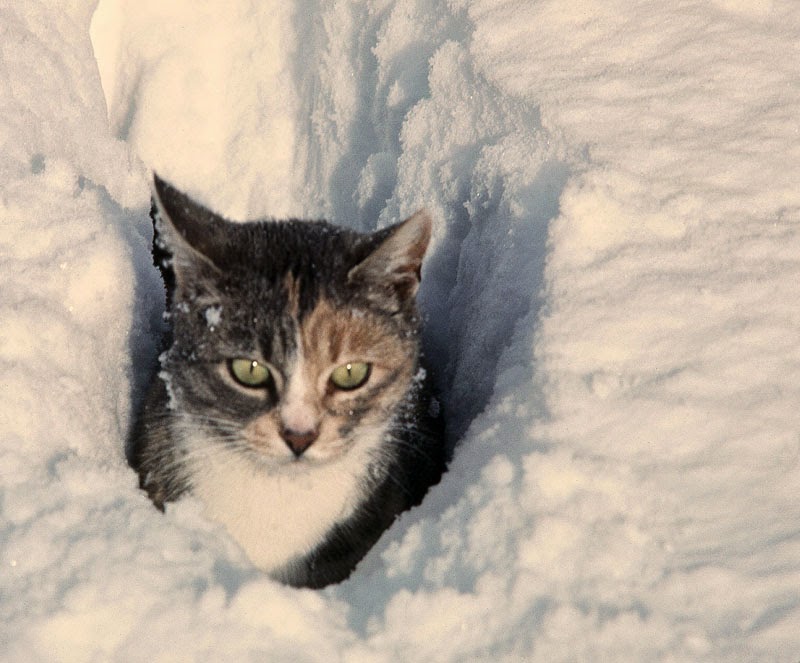 Between being snowbound at home and trying to cope with SAD (Seasonal Affective Disorder), I started to realize why I was feeling this way. For me, it seems like everything kind of comes to a screeching halt in the winter. Life stops. Roads close...cabin fever sets in, and that's it. I also found a pattern with my depressive episodes. Right before February makes its round across the calendar, I go into a major funk. Then I think, "I have a birthday coming up on the 4th." I used to get excited about it, but not after I turned 39. That was the last year -- the "last dance" of being in my thirties. Even my 30th birthday somehow freaked me out. I was no longer "the baby" or "that kid" or "that girl". I was "the lady over there" and the person you'd call, "ma'am" while grabbing my attention. Some call being 40 "middle age" and others say, "Oh you're still a baby," while lying through their teeth. But, you're only as young as you feel, right? Eh.

As an "adult" (an immature one), there's a stigma with people being "depressed" at my age. I remember back in the day whenever someone would go through an extreme depressive episode, they would say, "Oh didja' hear she went through a nervous breakdown?" What is that?

They Mayo Clinic states that a nervous breakdown is this:

"The term 'nervous breakdown' is sometimes used to describe a stressful situation in which someone becomes temporarily unable to function normally in day-to-day life. It's commonly understood to occur when life's demands become physically and emotionally overwhelming. The term was frequently used in the past to cover a variety of mental disorders, but it's used less often today. Nervous breakdown isn't a medical term, however, nor does it indicate a specific mental illness. But that doesn't mean it's a normal or a healthy response to stress. A nervous breakdown may indicate an underlying mental health problem that needs attention, such as depression or anxiety. Signs of a nervous breakdown vary from person to person and depend on the underlying cause. Exactly what constitutes a nervous breakdown also varies from one culture to another. Generally, it's understood to mean that a person is no longer able to function normally.
For example, he or she may:
Call in sick to work for days or longer
Avoid social engagements and miss appointments
Have trouble following healthy patterns of eating, sleeping and hygiene
A number of other unusual or dysfunctional behaviors may be considered signs and symptoms of a nervous breakdown." 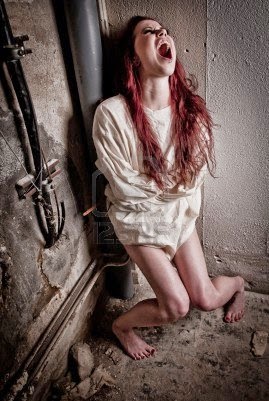 Aside from the hygiene part, I'm nodding my head, yes yes and yes. I think it's safe to say we all went through this. When my mother used to talk about nervous breakdowns when I was a kid in the late 70's (yes I'm old) -- I envisioned a woman (yes middle aged) shaking and trembling in the corner screaming her lungs out. But now, "nervous breakdown" is just like manic depression turning into bipolar disorder. Every term sort of shifts and morphs into another diagnosis. I truly believe that many psychiatric doctors and social workers can't pinpoint a diagnosis because we all have such different ailments, life situations and coping mechanisms. It's very challenging to sit there and give an exact "science" and answer and especially a label to what someone is going through. I'd call it, "life". What's so shameful about life? No one gets out alive anyway. Lame sarcasm, but true. 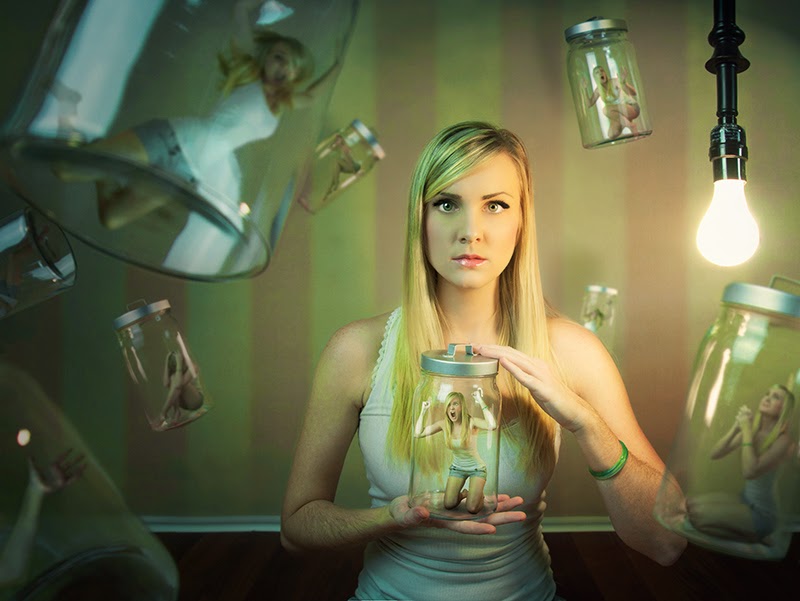 In all honesty, I think it's so unhealthy for people to keep all of their emotions and problems inside. Maybe I'm different, but even when I have problems at home, I talk about it with my family and friends. Without totally bashing whoever and whatever, it can be a healthy outlet. I never understood why some people who were having trouble in their marriages or having family issues would keep everything so "hush hush" as if they were the only ones who went through this sort of thing. "Well, it's none of anyone's business anyway." No, you're absolutely right. But wouldn't it be nice to relate to someone who's going through the same thing? And when does it come to the point of faking life? When do you finally stop saying, "I'm fine," when someone says, "Are you okay?" When do WE start telling the truth and relating to one another on a much deeper level? And at the same time, I am hearing "dysfunctional family" used a lot more than we're accustomed to -- that being a good thing. We all have dysfunctional families to some degree! And that's what makes us all relate. That's what makes us poke fun at the idiosyncrasies of our relatives and in-laws. 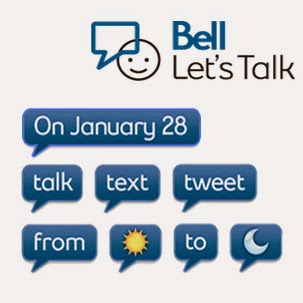 So today is the annual Bell Let's Talk awareness campaign. It's driving the national conversation to help reduce this stigma and promote awareness and understanding. Bell has committed over $67.5 million to support a wide range of mental health organizations, large and small, from coast to cost to coast. Today, for every tweet using the hashtag, #BellLetsTalk, Bell donates 5 cents more to mental health initiatives. So let's start the conversation!  Click here for more information and get on Twitter and be apart of the huge chitchat about mental illness. What do you go through? How can you help? Let someone know that they're not alone. Share some of your own experiences, if you're brave enough. Start letting the world know that it's OKAY to talk about it. You're not "crazy" or "nuts" for being depressed or from suffering with anxiety attacks. We're all in this together.

If you or someone you know feels suicidal, please call the National Suicide Prevention Lifeline at 1-800-273-TALK (8255). You'll be connected to a skilled, trained counselor at a crisis center in your area anytime 24/7.  I'm not ashamed to say that I needed them a couple of times. It helps.

For more of Deb's articles, please visit: www.debrapasquella.com or join her on Facebook and Twitter. Check out her cooking blog for some of her famous recipes!
anxiety Bell Let's Talk bipolar disorder depression emotions mental health mental illness suicide talk to me