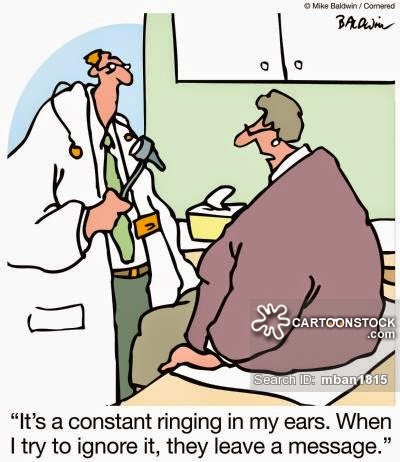 There's gotta be a better way to connect with someone, whether or not you've known them for 5 minutes or 10 years.  Platonically speaking, have you ever felt that sense of mutual comfort with a close friend when you know that without a doubt, that you can call this person after midnight if you're dwelling over something? Or, have you felt comfortable enough with someone whereas you can contact them at least more than 3-4 times (sometimes 20 in some cases)? And how do you know for sure, that this person is welcoming your phone calls, texts or emails? If you say, "Well, they answer back," then I'm going to say, "Well maybe they're just being polite and then pulling their hair out afterwards."  I sort of become leery once I see the red flags, especially with a new friend. At the risk of sounding seasoned in my years, I sort of become reclusive once someone tries contacting me more than a few times out of the day, unless it's my wife of course. Granted, if a friend needs me a few time out of the day because he or she is upset or going through something traumatic, then yes, please call, text or message me however you'd like. But when is too much too much?


"Seen!"
With social media and the advanced technology of smartphones letting people know that your message has been "read" -- it's hard to say, "Oh, I didn't get your message." The message, "Seen at 10:45am" can cause some people to flip out once their friend hasn't responded in .09 seconds. We want immediate response! 99% of people have their phones right in their pockets or hands, so there is no reason to not respond right?

The word above -- not typing that again. 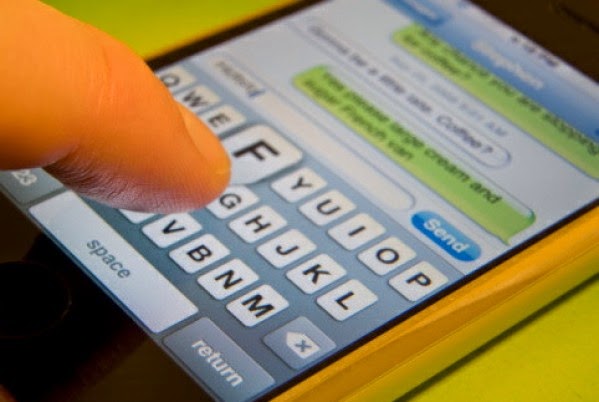 It's a fear of texting. It can apply to those who get anxious texting first, or just texting in general. In my case, it is responding or (not responding) to texts I receive. I haven't gotten yelled at (ok that's being a bit dramatic) -- I have gotten the third degree whenever I don't respond right away to a text. If I don't respond, I get the wrath of, "Why didn't you respond? You saw my message!" I also have the fear that some are secretly stewing over the fact that I am taking over 20 minutes to respond to their text message. It's crazy. Most of the time, I receive the message and I just can't text back right away for whatever reason, OR I just don't feel like responding ---period. We are in a world where we need instant gratification either by checking our emails, texts, phones, and I don't like to feel obligated to respond ASAP.  Wouldn't it be nice if people responded when they truly wanted to? Many people would 'get the hint' if they never received a response, but wouldn't that be a good thing overall? And what about the ones who have a hard time ending the text message conversation? It's not like the good ol' phone where you can let them know by a simple, "ehhh, okayyyy" type of sigh, indicating you need to go.  We literally have to say, "Let me text you later" or "Oh sh*t, phone!" (Don't you have to answer the call before saying you have a phone call? Think... 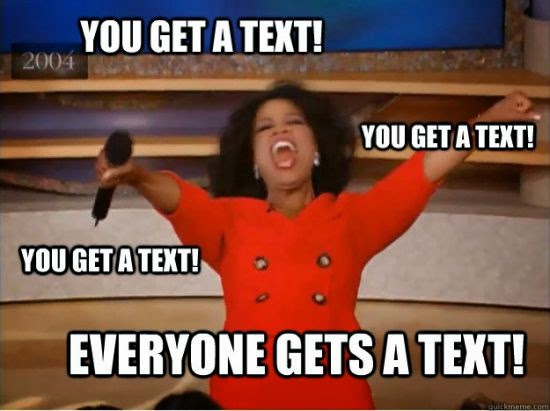 The biggest pet peeve of mine is receiving an MMS group message. They're text messages by your smartphone (or mostly your friend's) where they include a whole bunch of people within that one text. The worst offense is that you hardly know anyone on that list in the group. What happens here is -- let's say your friend says, "Happy Holidays" and sends it to you and 10 random people. Each response gets delivered to each phone it was received on. So you'll get a random message saying, "You too, happy holidays" by an unknown number. It gets better... You have those idiots that think it's okay to respond after midnight. I had one friend of mine who included me in a mass MMS group text messaging fiasco. The responses kept coming in even after 3am. I finally wrote a longwinded response to everyone on that list asking why they felt the need to include strangers on a text message, and why on earth would you respond at 3am if it wasn't some sort of booty call? In the same breath, I don't mind group messages with REAL friends on Facebook. I actually enjoy that. Plus, it makes it easier when we set up plans to meet up for parties or dinners. That's entirely different. There should be some sort of special place in hell for those who feel the need to MMS group message people. That's just my opinion though.

Recently, I went through a messy phase with a friend where if I didn't respond, she would keep typing massive paragraphs until I texted her back. The other night while sitting in a meeting, my friend kept texting me. The second alert, I thought it was just because I didn't check the first alert. So I silenced the phone. When I got out of my meeting, I checked my phone and saw over 10 text messages which were 10 full paragraphs talking about random everyday bullshit that she could have just told me over the phone or in person. She was bored and thought by texting me, that I could just read it over later and get back to her. I was overwhelmed!!! How do you respond to 10 paragraphs? So of course, I called her instead. There should be a 2 text message limit before a response. Get on that, Apple.

(Click off the mute button to hear this Vine video.)

Facebook messenger is no better either. It's a goddamn nightmare. Not only does it notify you of a message by a loud and annoying clank of a wine glass, but it's another reminder that your friend has the capability of knowing what time you've seen their message...and have not responded. Another beautiful feature is that it lets you know if the person you are contacting is "active". Let me just tell you how mortified I was to know that I was still "active" although I hadn't taken out my phone in over 1 hour. (That's a huge feat for me.) I asked my sister, "Check my Facebook 'active' status and let me know for how long..." She laughed and could hardly mutter out, "You're active right now!"  So my question is: is Mark Zuckerberg making people a little zealous knowing that their "friends" are active? Is it giving the itch to some to message them since they're already online? There's a psychological madness behind it when you see someone "active". "Well, they're online anyway so lemme' just throw them a message." NO! For me, I get high levels of anxiety if my messenger, or text message notifications go off too much. The video above is hysterical. Shows your how attached we are to our devices and how much our younger generation is going to be even more glued to our instant messages, literally "instant".

So my question to all of you who always have a smartphone attached to them like an appendage -- when is too much too much? And will this bring us to a new level of methylchloroisothiazolinonephobia?

For more of Deb's articles, please visit: www.debrapasquella.com or join her on Facebook and Twitter. Check out her cooking blog for some of her famous recipes!
at January 08, 2015