To Be or Not to Be: That is the Question! 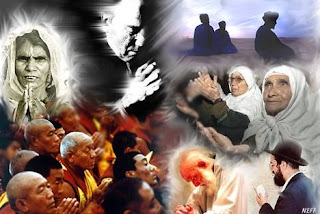 Over a hot cup of coffee this morning, Madelene and I got into a discussion about my blogger friends and their responses to question #4 on my previous post. That seemed to ring a tune for most readers. I even received a few emails over this topic and some ‘not so nice’ emails, but that’s a given when you get into religious beliefs and the lack thereof. It all started with my questioning of someone’s statement to me which was absolutely baffling and had no logic in it whatsoever: “I’m Atheist, Christian, Jewish, Hindu, Muslim, Catholic and Agnostic.” It’s impossible, (yes, I said impossible) to be Christian and be all these other religions, especially Atheist. The reason why I say this, is because to be Christian is to believe that Christ died for our sins and the only way to get into heaven is through believing that Christ did this for us and that He is the Son of God. How can a person be Atheist, Jewish, Hindu or Muslim? The Jews believe that Jesus was just a prophet, not the Son of God. The Muslims believe that Allah is the only way to get into heaven, with the perk of 72 virgins in the afterlife to boot. For me, when people say that they are “all” faith-believing in every religion, it’s basically the concept of ‘they want their cake and eat it too’. I don’t feel that I’m being harsh with my opinion and belief on this, I just don’t understand it. There is no logic behind it. Even though there isn’t “scientific proof” or “logic” behind religion or spirituality, it’s the logic behind the thinking, the mindset of having a belief system. What do you believe in? What don’t you believe in? You can’t have all, unless you are Agnostic and believe that there is ‘something out there greater’, yet not sure. I’ll take that. But to say you believe in every religion is just mind boggling to me. 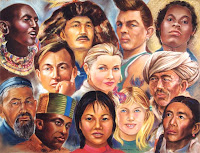 A blogger and friend named, Mark had written in my comment section: “You be Christian and I’ll be Christian with you, be Buddhist...hell, me too, Hindu...sure why not?” I can put it in another light that’ll make that statement seem a bit silly: “You be Irish and I’ll be Irish with you, be African-American...hell, me too, Chinese...sure why not?” When the fact being, I am not from Ireland, neither are my ancestors as well as all the other backgrounds I have listed. It. does. not. make. sense. See, the problem I have with someone saying that is to me, I feel that they may be “appeasers” in life. My friend had said something similar to what Mark had stated. This friend is desperately seeking acceptance from society on many levels, and to do that, religion is one of the biggest focal points - or as she calls it - “spirituality”, which I can respect. But when it comes down to brass tacks, it just doesn’t mesh. I tend to get that glazed look and wonder if they even believe in themselves. For me, it’s the same concept as what my dad always always said: “If you’re gonna steal --steal big!” (I know, not a great role model, so just bear with me.) If you’re going to believe in something, especially the afterlife, why not believe BIG? By dipping into every religion - a little bit here, a little bit there - you’re telling me that it’s not the religion that you’re trying to fit into your life, it’s you trying to fit in with society. Or maybe some people view religion like Greek mythology: simply fascinating stories. I don’t know.

I’m asking some questions for a variety of people:

1. If you are solely Christian or Catholic (trinity-based), does it seem logical to believe that Jesus is the only way to get into heaven, but you can still worship other gods and/or not believe at the same time?
2. If you are Muslim, can people of your faith believe in other gods?
3. If you are Atheist, do you believe that Jesus, Allah or Buddha is the only way to get into heaven?
4. If you believe in all religions as well as being Atheist, then please define “Atheist”.

Mind you, I am not trying to get people to agree with me, I am just trying to absorb all of this. I encourage opposing views on this, which I know I will get, and perhaps I can learn from those opposing views because right now, I’m totally lost.
Christianity Debra Pasquella religion spirituality to be or not to be