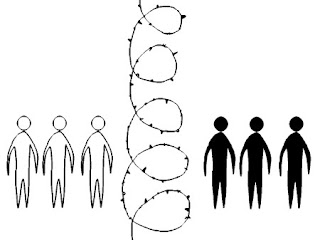 When I tell someone I live in New York, they immediately think I live in the heart of Manhattan. Living in the suburbs on the outskirts of New York City, you’d think it would be more diversified, more of a melting pot of sorts. Sadly, I have come to realize that isn’t so. Almost every establishment, restaurant and bar are filled up to the brim with caucasians. If you see a black couple walk into a restaurant or bar, your mind automatically goes to: “Are they lost?” It’s just the way it is here. There of course, are other towns to which particular cultural groups congregate towards, but there is never an equal mix.

One night, Madelene and I decided to head over to the bar across the street to grab a drink together. We know most of the people who go there and it’s usually a ‘happy hour come after work’ type of place. On this one particular evening, I saw a Hasidic man standing in the corner by himself. He didn’t have a drink in his hand and just looked around and checked his BlackBerry periodically. His uneasiness was evident. I motioned him to come over. He looked at me, then looked around to see if I was trying to grab someone else’s attention, until I said, “Yeah, you. Come have a drink with us!” I told the bartender we wanted to buy him a drink and he ordered a Coke. We introduced ourselves and moments later, Ian was yapping away and sharing his life with us which was fascinating in itself. There were no cultural barriers any longer, no uneasiness of wondering: what do they think of me? To have left him standing there alone while people stared and whispered over his presence at a “public house”- which is what “pub” stands for, would have been inhumane in my opinion.

This past Saturday, after having my mother’s 72nd birthday at our favorite restaurant, we then headed over to another local bar where ‘everybody knows your name’. It was nice to see everyone again because we don’t venture off to the bars all that much as we used to. I guess that comes with age. An hour later, a young attractive black man walked in, took a seat at the end of the bar and ordered a cognac. Since this bar encourages everyone to engage in conversation, especially the bartender, I felt bad because nobody was talking to this man, in fact, they were trying not to look at him. The people that were standing over at a table behind the man were big white brawny logger looking men along with their wives who apparently were stuck in an eighties warp with their feathered back bleached blonde hair and their leather coats with hanging tassels. I saw them sneer at the black man and it appeared as though they were talking about him and laughing. I was cringing at this point. I told the bartender that I was buying the man at the end of the bar a drink. He put an empty shot glass near his cognac and said, “My girls over there wanna buy you a drink buddy.” His face lit up like a Christmas tree, and we motioned for him to join us. We brought him in so these assholes behind us wouldn’t make him feel unwelcome any longer.

We came to find out that he recently just moved up here because he had lost his mom not too long ago. We got to know him on a personal level and made a new friend. He was a gentleman the whole time and respected Madelene and I as a couple. Some men, no matter what race they are would have been less respectful over two women together. We had such a great time with Jamal that it was just us three in a little bubble having our own little party. We introduced him to our friends and he was immediately taken in, and now has other people to meet whenever he wants to go to the bar for a drink after work. Getting back to the people behind us at the table sneering at him---I seriously felt as though I was in a time machine back in the South. I felt the tension that I once thought was nonexistent, perhaps as a country, overcame all prejudices. I was quite surprised to see the very opposite. This is why I enjoy going into Manhattan for dinner and drinks because we’re all one. There are no bars that are limited to a particular race, and if you go into a Cuban restaurant, an Italian restaurant or an Irish pub, rest assured you’ll see every face from every country smiling back at you.

Wouldn’t life be boring if we all looked the same, came from the same place and only had one type of demographic? I was sad to see the lack of progress in my very own town, right next to NYC.
cultural differences Debra Pasquella demographics prejudices